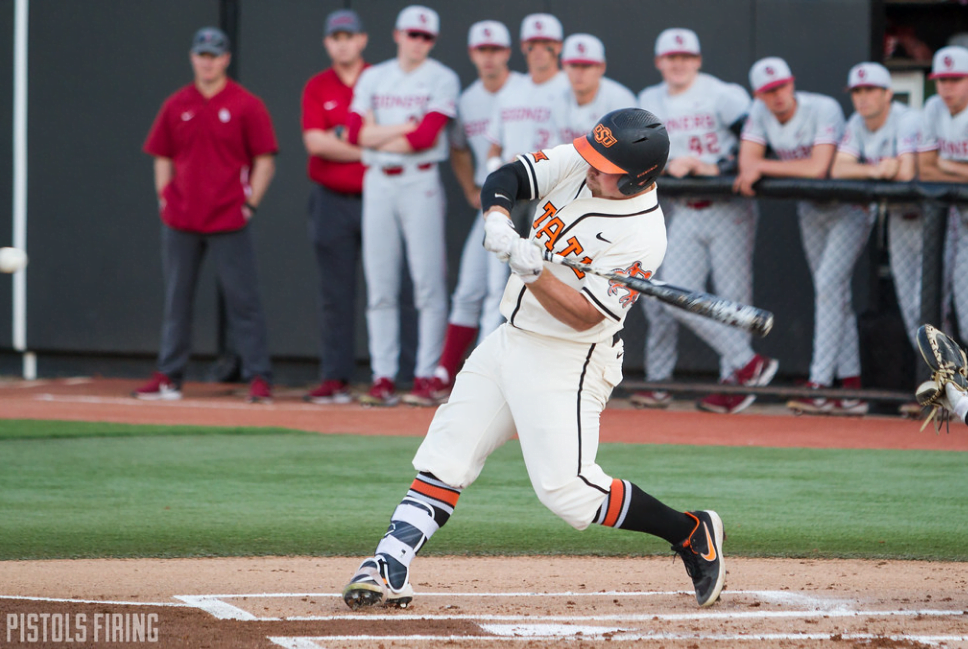 STILLWATER — Colin Simpson is not a guy a pitcher wants to see with the bases loaded in a tie game.

The Oklahoma State baseball team defeated West Virginia 9-5 on Saturday after Simpson belted a go-ahead grand slam in the eighth inning. The Cowboys were able to come back from a 5-0 deficit after getting drilled 11-1 on Friday. The win sets up a rubber match Sunday, with first pitch scheduled for noon.

With two outs and the bases loaded, Colin Simpson dropped some hail on Duck Street.

The home run was Simpson’s eighth against West Virginia in his career. During the 30-minute weather delay before the game’s start, Simpson said WVU pitcher Sam Kessler, who Simpson got to know at the Cape Cod League this summer, told him that Simpson has a quota of two home runs he has to get against the Mountaineers. Simpson said Kessler asked that Simpson didn’t hit any off him. Simpson denied said request.

FIRE UP THE GAP BAND, GRAND SLAM! ? @colinsimpson30 does his thing and the Cowboys have their first lead of the game! #HomerSimpson #GapBand #okstate #GoPokes pic.twitter.com/Bw6WcvgVwu

The moonshot came off the first pitch Kessler threw Simpson. Simpson said Kessler throws a lot of sliders, and he was waiting on it.

Simpson said with there being two outs, he was swinging for the fences.

Simpson is known for his home runs, but it was only his fourth this season. After the game, OSU coach Josh Holliday called Simpson a marked man because teams were pitching around him to avoid giving up big plays. With the bases loaded, though, the Mountaineers had no choice.

“Colin crushed it,” Holliday said. “I don’t think he could’ve hit it any harder. I know he’s hit some further, but I don’t know if he’s hit any harder. That ball was absolutely screaming its way over the signs.”

Before Saturday’s game, NCAA home run king Pete Incaviglia met with the Cowboys, and something from that meeting stuck out to Simpson.

“The first two strikes are for you,” Simpson said Incaviglia told the team. “The last strike of the at-bat is for the rest of the team and for you to find a way to get on base.”

All Simpson needed was the first strike.

That wasn’t all Incaviglia covered in his speech, here is a synopsis from Holliday.

“He didn’t draw his inspiration from himself. He drew it because others were counting on him. That was an interesting way for the greatest individual player ever to explain to these kids what drove him.”

Incaviglia is set to throw out the first pitch for Sunday’s rubber match.

He finished 2-for-4 with two runs scored, and he drew a walk. In the fifth inning, he hit a double to the left side that found its way to the corner in left, and Morrill legged out a double.

It wasn’t only what he was doing on the offensive end. He was also doing stuff like this on defense.

? WEB GEM ALERT!!! ? @hueston_morrill gets dirty, stealing a hit and saving a run for the Cowboys in T2! #okstate #GoPokes pic.twitter.com/RmapJJ2fTH

Through 15 appearances, Ben Leeper has a .54 ERA and has given up only one run.

Leeper entered in the ninth Saturday. He gave up a walk to start the inning before striking out back-to-back batters and forcing a groundout to end the game. The Cowboys are 28 games into their 2019 season, and Leeper leads or is tied for the lead for the Cowboys in wins (three), ERA (.54) and saves (four),

“It’s shut down,” outfielder Trevor Boone said. “You know when Ben goes in, all you gotta do is get ready to go line up and shake hands.”

In 1959, OSU’s national champion baseball team didn’t get rings, but they did Saturday.

Before the game, players and family members from the Cowboys’ national championship team were recognized along the third-base line, culminating in current OSU players walking out and awarding the rings.

in Stillwater, OK where @OSUBaseball @OSUAthletics is celebrating 60th anniversary of my Dad's National Champion in baseball. pic.twitter.com/1ORxraPLu2

It’s been a celebratory weekend for the 1959 team, as shirts based of the ’59 jerseys were handed out to fans Friday, and Saturday replica rings were given to the first 1,000 fans at the park. Sunday the squad will have an autograph session.

Seeing them together is something to behold. Trevor Boone said he got goosebumps walking by the team in the dugout before Saturday’s game.