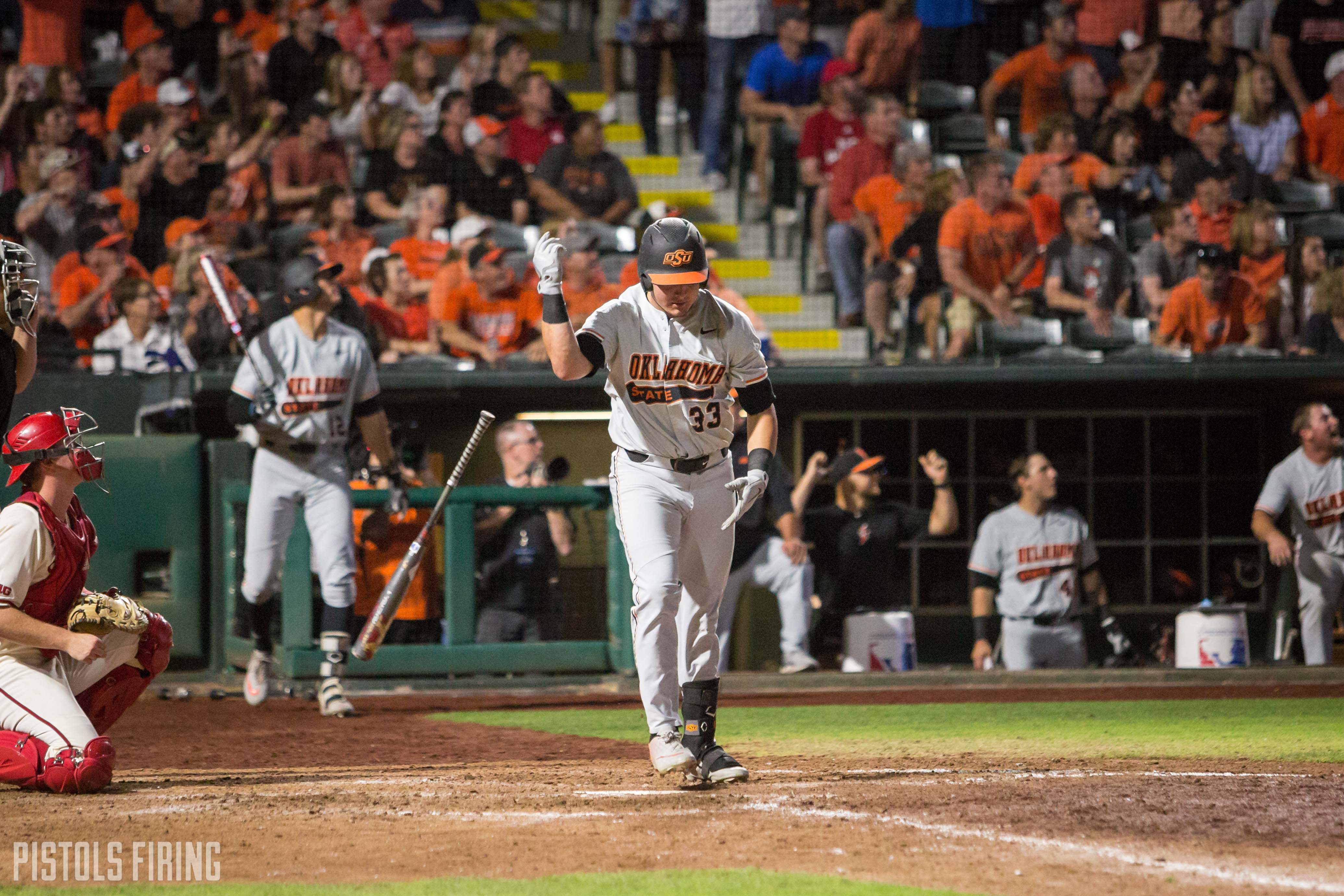 OKLAHOMA CITY — If it was ever in doubt, the Cowboys are always a swing away.

The Oklahoma State baseball team defeated Nebraska 6-5 in the Bricktown Ballpark on Saturday thanks to a Trevor Boone ninth-inning moonshot that gave the Cowboys their first lead of the game.

Here are five thoughts from a ridiculous night at The Brick.

Legend has it, Boone’s smash hit off the H of the “Chickasaw Bricktown Ballpark” sign that overlooks left field.

Others wondered if it hit the parking garage beyond the stadium. Some might say the ball found it’s way back to Allie P. Reynolds Stadium to give the ole ballpark the last NCAA Regional it deserved.

Regardless of where the ball hit, it made for a legendary story in OSU’s baseball lore, a story that will only grow and grow the farther the Cowboys can go. The world loves nice, whole numbers, and that was Boone’s 20th home run of the season. Much like Samantha Show’s performance against Florida earlier this weekend, Boone’s 20th bomb will be a story that transcends this season, as the 4,814 in attendance will likely remember the state of euphoria Bricktown Ballpark broke into when Boone took a first-pitch fastball to the heavens with the Cowboys down to their final out.

“What can you say?” Holliday said. “That’s one of the best moments I’ve ever been in a uniform to share with a group of guys.”

Is OSU Defensive-Minded Guard U? Maybe. Is OSU Wide Receiver U? Probably. Is OSU Bat Flip U? Definitely.

The Cowboys were an out away from having to win three straight games in the next two days to advance their season.

The inning started with Nebraska going to its closer, Colby Gomes, who was tasked with protecting the Cornhuskers’ 5-2 lead. Gomes is a flame thrower, who touched 96 mph in the inning.

Gomes forced Cade Cabbiness to ground out to start the inning. One down, two outs from a good shot at a Super Regional. Max Hewitt, who came on as a sub after Hueston Morrill left with an injury, then battled to a full count and drew a walk, and the thousands of OSU faithful began to wonder.

Christian Funk then singled to right field, advancing Hewitt to second, and the crowd’s excitement grew. The stadium collectively gasped as Colin Simpson then drilled a fly ball to center, but the oohs were turned to awes as the ball didn’t have enough umph to get out of the park. Two down and an out from Nebraska glory.

Andrew Navigato, who has been ridiculously good for the Cowboys in his first season at OSU after transferring from Cuesta Community College, proved clutch again. He singled up the middle, scoring Hewitt and putting Funk on second.

At this point, the crowd was in a frenzy, as it realized the Pokes were two runs down with their leading home-run hitter coming to the plate with a chance to score three. Gomes, who remember is a flame thrower, took the battle to Boone, but Boone was ready as the first pitch he saw was the last one of significance Gomes threw Saturday night.

With how nuts the triple-A stadium was going, it would’ve been easy to think the game was over.

But, the Cowboys played Saturday as the away team, meaning the tables had turned, and they were now the team three outs from glory.

OSU pitching coach Rob Walton called on Ben Leeper, his closer. Leeper was dominant in the early part of the year, but he had a woeful last outing. Against TCU last weekend in the same park, Leeper failed to get an out as he gave up four runs off four hits in OSU’s Big 12 Tournament loss to TCU.

Saturday, Leeper kept the crowds jubilation going, as Alex Henwood grounded out on the first pitch he saw. Then the Cornhusker’s went back to the top of their lineup, as Jaxon Hallmark battled to a full count before flying out to left field.

Then it turned to a one-on-one battle: Leeper vs. Luke Roskham. Strike. Ball. Ball. Foul. Then, on a 2-2 count, Leeper zipped a ball to home plate, and Roskham watched it go by just for home plate umpire Ray Gregson to ring him up and end the game.

“Everyone’s roaring and just going crazy with every pitch I throw and every out I get, it gets louder and louder,” Leeper said. “You get to two strikes on the last batter, and you got (4,814) people on their feet wanting the game to end, I feel like it’s my responsibility to end the game.”

Jake Lyons entered the game in the third with his team trailing 3-0.

It got worse before it got better, as Lyons allowed Nebraska to score two runs in his first inning on the mound, but the 6-foot-5, 282-pound junior was lights out after that.

After the third, Lyons threw four straight perfect innings before allowing a single in the eighth, but that was it. He came on for Parker Scott, who entered Saturday with a team-best 1.45 ERA, but Scott got rocked and gave up three runs in the first inning.

“What happened at the end of the game isn’t in play unless Jake Lyons goes out does what he did,” Holliday said. “For him to come in behind Parker and pitch the way he did gave our team a chance to decide that we were gonna make a push.”