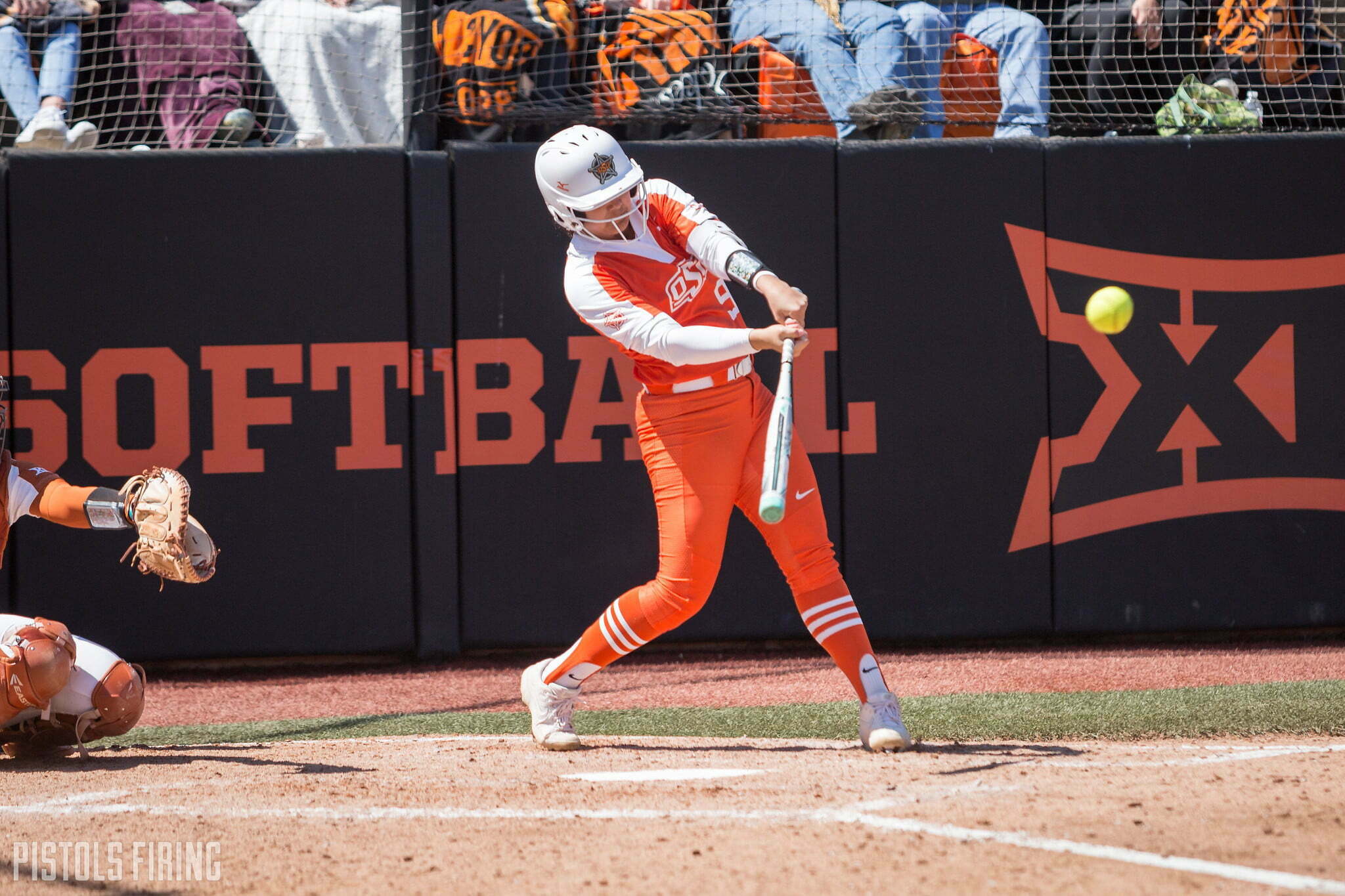 STILLWATER — In a game of emotional swings, Chyenne Factor took a swing that would give the Cowgirls the momentum they needed to defeat their in-state foe.

The Oklahoma State softball team defeated Tulsa 13-10 on Friday in Stillwater’s NCAA Regional. Factor, who is only a freshman, hit a two-out grand slam in the sixth inning to put the Cowgirls up a pair of runs. In the next inning, Samantha Show crushed a three-run shot to make it 13 and insurmountable for the tough Tulsa team.

Tulsa led 8-5 heading into the sixth, as it looked as if the Cowgirls were going to have to play another game Friday evening before Factor’s grand slam.

Chyenne Factor is only a freshman, and she has one of the more clutch hits in OSU softball’s recent history.

Her two-out grand slam put OSU back on top at 10-8, but it also gave the Cowgirls some much needed momentum at a time where everything seemed to be going Tulsa’s way.

Wind was coming from the south at 20 miles per hour at Cowgirl Stadium, and that led to six home runs all going over the left-field fence.

There were some that probably needed the wind. Factor’s grand slam, for example, got caught up in it before landed a foot or two beyond the wall. Then there were shots such as Samantha Shows’ three-run home run in the seventh that didn’t need it at all. The ball nearly landed on McElroy Road, a good distance beyond the wall.

After the game’s final out, Logan Simunek stepped out of the circle and spiked her glove into the dirt victoriously.

Simunek came in to relieve Samantha Clakely, who started the game in the circle, but Simunek hit an early rough patch in the fourth inning. After Sarah Briers reached on a throwing error, Simunek walked three straight batters, walking in an unearned run. The Cowgirls then got their first out of the inning via pop up, but Simunek then walked in another run. Then another run came from an error.

After that three-run inning that had more to do with OSU’s mishaps than Tulsa’s hitting, Simunek stabilized, facing only three batters in a scoreless fifth. She allowed runs in the sixth and seventh, but by then her run support was back.

Gajewski said he told Show that if the Cowgirls got the lead, she was going to pitch, but when the lead came, he felt comfortable with how Simunek was doing.

“I need Logan,” Gajewski said. “We need her. I need her for next year. I’m trying to build a program that’s sustainable. She’s gotta learn how to fight through and just grind. She really hadn’t been hit hard. She was doing the damage to herself.”

In a quick skim of the box score, Chelsea Alexander’s numbers probably wouldn’t jump out.

A sophomore from Latta High School in Ada, Alexander was 0-for-1 at the plate, but her patience in the nine hole proved solid for the Cowgirls. Alexander crossed the plate twice Friday after drawing a pair of walks.

Alexander stole second in the fourth inning. As she slid into the bag there was a bit of chaos with TU catcher Rylie Spell’s throw, and it ended up in center. Alexander popped up and ran all the way home on the play, tying the game at 5.

Now the Cowgirls wait as Tulsa, BYU and Arkansas run through a gauntlet for the opportunity to play OSU at 3 p.m. Saturday.

BYU, who OSU beat Thursday, eliminated Arkansas in the game after OSU’s. The Cougars now quickly turnaround and face Tulsa on Friday evening with the winner advancing to OSU.

OSU still has two losses to work with, meaning if the Cowgirls lost the 3 p.m. game Saturday, the two teams would play again.

“We still have a long way to go,” Gajewski said. “This’ll be a new point. Getting past this point today was big. You just gotta keep breaking down these barriers, and this team isn’t just breaking them down, they’re busting them down. They refuse to get beat.

“We’ll get through here now and sit back and watch and let these teams, I hope they play 15-inning games and they go about five hours. We’re gonna go back home and chill and watch and prepare.”