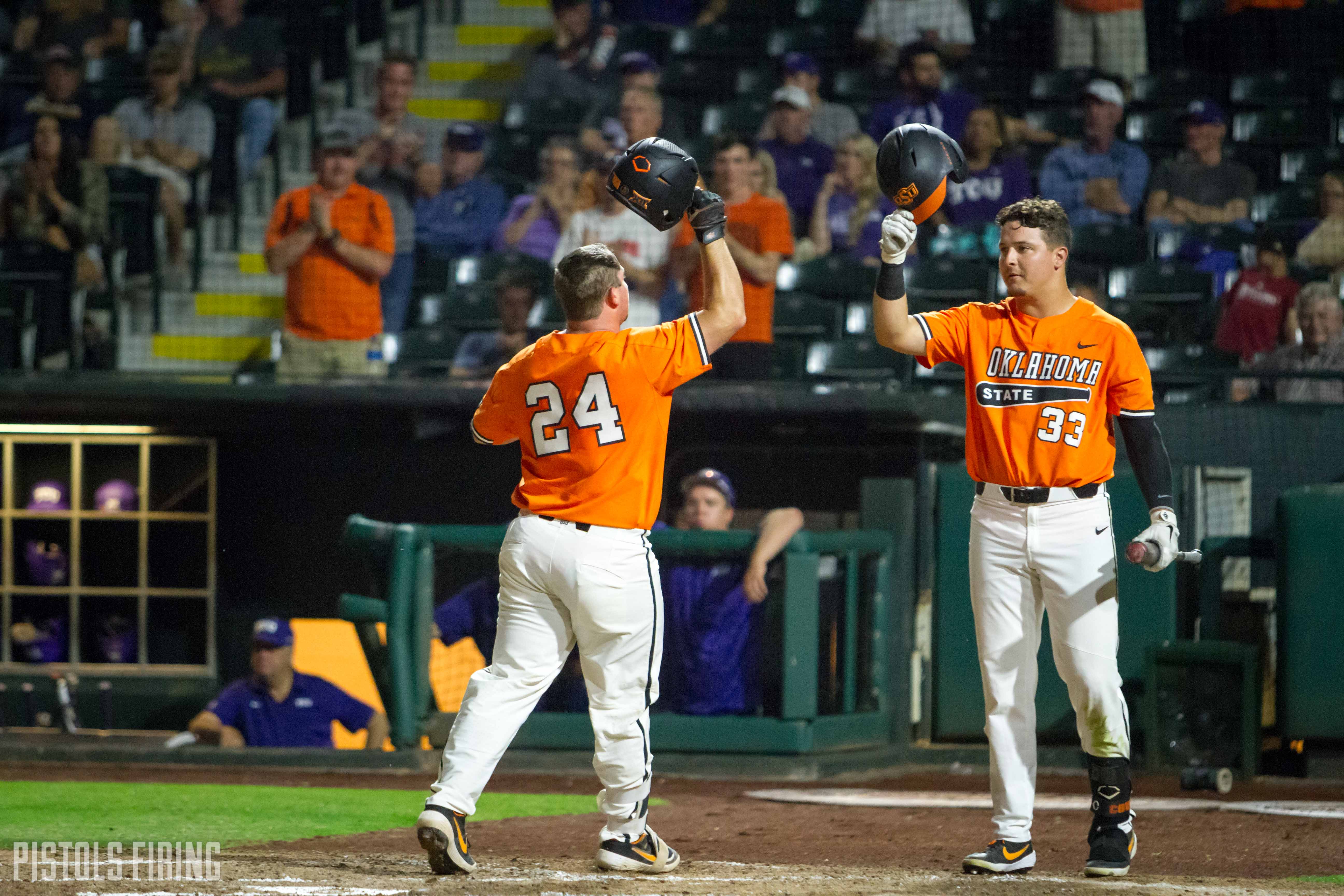 The Oklahoma State baseball team defeated TCU 5-2 on Wednesday in the three/six matchup, making the higher seeds 4-0 on the day. With an original start time of 7:30 p.m., the game’s first pitch wasn’t thrown until 8:57 p.m., but the baseball gods kept the game fairly brisk, as it finished in 2 hours and 46 minutes.

“The greatest excitement in them that they won tonight is that they don’t have to wake up and play at 12 o’clock tomorrow,” OSU coach Josh Holliday said. “Sometimes you just celebrate some of those small subtleties.”

Nick Lodolo was keeping the Cowboy bats in check until he wasn’t.

In the sixth inning, the Cowboys busted open what had been a 1-1 deadlock since the third. It got started with a Cade Cabbiness infield single. Cabbiness crushed a ball into the ground that bounced up high to the shortstop, but by the time Adam Oviedo was able to field the grounder turned popup, Cabbiness was able to beat the throw at first.

Next Lodolo walked Hueston Morrill before striking out Christian Funk. Then with runners on first and second and one out, Andrew Navigato doubled to left-center, scoring Cabbiness.

Then came Colin Simpson, who homered in the second inning. Simpson hit a full-count sacrifice fly to right. Morrill scored, and Navigato advanced to third.

Next was Trevor Boone, who crushed his Big 12-leading 19th home run to left field and all of a sudden what was a close, low scoring game wasn’t. The four-run sixth inning made it 5-1.

“Lodolo, he provides all the power for you,” Boone said. “It was a 1-2 count, and I was just trying to get my foot down and see the ball out of his hand and put a good swing on it.”

2. Lodolo Is That Man

It was a bit of a quick turnaround for TCU’s ace Nick Lodolo, but he proved worthy of his All-Big 12 first team honor.

Lodolo, a projected first-round pick, pitched eight innings six days before his tournament-opening start, but he still had it going.

The big lefty finished having thrown seven innings where he allowed five runs of five hits while striking out 12(!). He looked somewhat rocked in the second inning after Colin Simpson jacked a lead-off home run to left. That was followed with a big Trevor Boone swing that took a jumping catch at the warning track to keep it in the park.

Lodolo was able to reclaim his mojo, and went on a spree of striking out eight straight batters from the third to fifth inning.

The Cowboys were able to rerock Lodolo in the sixth, and that proved to be enough. But, there were times there where it looked as if he was going to throw strikeouts until his offense got it going.

Usually when you think of power hitters as much of OSU’s lineup is made of, you think big, immobile guys. That’s not the Cowboys.

Holliday’s squad is a bunch of athletic anomalies, the kind that make baseball fun to watch.

The OSU infielders look like they could be in net for the OSU club soccer team, while the Cowboys outfielders are massive (average height of 6-4) and are able to track down a ball like Yor Anei prepping his next swat.

There aren’t a lot of false steps for the group. The Cowboys are solid of tracking balls straight off the bat.

“They always have my back,” OSU pitcher Parker Scott said. “The first inning would’ve been different if Boone didn’t make that play.”

The Cowboy defense’s facilitator wasn’t half bad either.

Parker Scott threw six innings, allowing a run off four hits while walking one and striking out four. Scott lost his start this past weekend, with the Cowboys’ series starting early then getting cut short because of weather. Scott hadn’t pitched since his Bedlam start on May 11.

The result: Scott threw the second-most amount of innings he has all season, and he was still able to be as good as his team-leading 1.44 ERA entering the day shows.

“For my arm, (the extended rest) helped a lot I feel like,” Scott said. “Maybe not for my command and pitches, but my arm felt a lot better than it has been.”

The Cowboys used only Scott, Logan Gragg and Ben Leeper on Wednesday, a solid sign in a tournament setting. The Cowboys will likely start either Brett Standlee, Joe Lienhard or Jensen Elliott on Thursday. There is a precedent of OSU giving pitchers a full week off, meaning Elliott would wait until Friday. But with it being the Big 12 Tournament, who knows?

“Feeling like we’re in a pretty good spot to advance, we want to play this very aggressively, but also play it smart because you don’t want to do anything this week that would cost you a chance to play well next week,” Holliday said.

With the victory, the Cowboys will take on Baylor at 7:30 p.m. Thursday night. I say that recognizing that Wednesday’s game was supposed to be at 7:30 p.m. but started an hour and a half later.

Baylor defeated Oklahoma 8-2 in the game before OSU’s to advance. The Cowboys and Bears met last weekend, but their series got cut short because of weather. The Pokes won both of the games the two did play, beating the Bears 16-4 last Thursday and 5-4 the next day.

“This four-team pod we’re in, when you look at how good these teams are, this is better than most regionals will be, for sure,” Holliday said. “… It’s a great tournament, and it’s a fun tournament. It’s nights like tonight where you stick around all day long with anxious energy to play, and you finally get on the field and something great happens. These kids will never forget that night.”