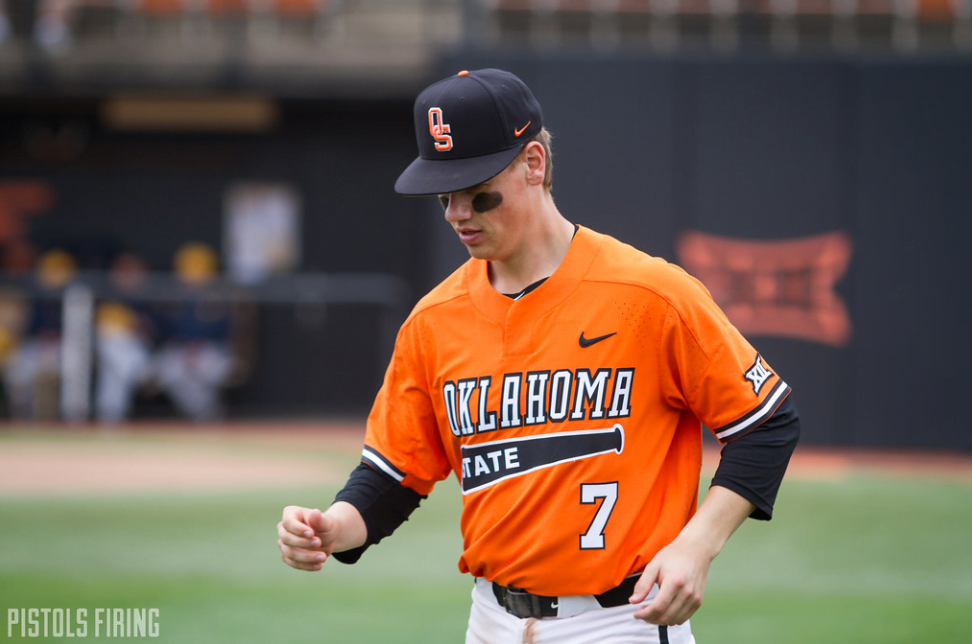 Oklahoma State defeated Baylor 5-4 on Friday in the stadium’s second to last regular-season game. The game had an unlikely hero and an expected one, as the No. 13 Cowboys’ raucous crowd stayed on-hand until the final play.

The victory gives the Cowboys a series win against No. 12 Baylor, a team that led the conference entering the weekend. Here are five thoughts from Friday night.

Max Hewitt came on for an injured Hueston Morrill, who strained a muscle jumping for a ball, in the third inning and had a great game.

Hewitt finished 2-for-3 at the plate and hit his first Division-I home run, a solo shot in the bottom of the fifth. His home run ended up being the difference in the game.

It was Hewitt’s first multiple at-bat game since April 2 against Central Arkansas. Hewitt’s season highlight to this point had been his walk-off single in the final Bedlam game in Allie P. He now leads the team with a .323 batting average.

He was also making plays in the field, such as this glove dish to Alix Garcia at first:

This might be the deepest OSU team in a long time.

Some examples include: Hewitt slotting in for Morrill. McCusker was out for about a month earlier in the year and Noah Sifrit stepped in. Dylan Gardener played much of the early season at second base but an injury made way from Morrill.

Another recent happening is Bryce Carter, who has been a great hand behind the plate for OSU.

After Thursday’s game, Colin Simpson revealed he had a fracture in his left wrist. He said it’s a pain-tolerance injury, and catching is where it would give him the most problems with constant impact to it.

Simpson is still able to hit, evident by him hitting a grand slam Thursday or drilling the top of the scoreboard Friday night.

A deep team is a dangerous team at this point in the year, and the Cowboys are both of those things.

3. Elliott Got Better as Time Went On

The Bears were getting solid contact off Cowboys’ ace Jensen Elliott at the beginning of Friday’s game, but Elliott was able to hang in there.

The junior right-hander finished with his third complete game in his pasts five outings. He gave up four runs off seven hits while striking out five and walking no one.

It wasn’t looking great early, though. He gave up three runs in the second inning, the first of which came off a wild pitch. Then to start the third, Richard Cunningham hit a solo home run to right, but Elliott was solid from there on.

“I told Jensen that’s the most mature game I’ve ever seen him pitch and maybe the best game I’ve seen him pitch,” Holliday said. “After the early innings where he wasn’t quite as sharp, he settled in and pitched dominant baseball against an excellent, excellent offensive team.

“He did that and was able to self correct in the matter of an inning. Earlier in the year, he didn’t have that ability. That’s a real growth moment for him.”

Elliott said in his previous outing, another complete game against Oklahoma, that he lost some velocity toward the end of the game. So, he told himself that wasn’t going to happen Friday night. It wasn’t happening, as he was still in the high 80s in the ninth inning. He said OSU’s crowd of 3,091 helped with that.

“Rob (Walton) came up to me after the eighth and goes, ‘Jensen, you’re at 90 pitches. How do you feel?'” Elliott said. “And I go, ‘Rob, you’re not taking me out of this game whether I have to run out there and you try and stop me or not. I’m going out there.'”

Speaking of those 3,091 fans, they gave the Cowboys a standing ovation as they took the field in the ninth and that celebration grew louder when Elliott stepped out of the dugout to finish the game.

Holliday has tried his best to not get too sentimental about the stadium’s impending retirement, but he cracked a bit Friday night.

“Oh, no, it’s not just another weekend,” Holliday said. “It was a great baseball game. A great day for OSU baseball. From having all these guys back to the way the current team played to the incredible crowd we had to the great individual performances today to recognizing some special seniors. I mean, you name it. There was a lot of things that happened today that really, for me, it’s why you do this.”

When asked what made tonight seem different, he said it had a lot do with being around the guys he grew up watching and the stellar crowd.

“That was a real baseball crowd tonight. We had a big-time baseball atmosphere, and the crowd had a lot to do with it.”

Unfortunately for the Cowboy faithful, Texas Tech defeated TCU on Friday, meaning the Cowboys can’t outright win the Big 12. A share with Tech is still in play, though.

Should OSU beat Baylor again tomorrow and TCU defeat Texas Tech in the teams’ rubber match, the Cowboys and Red Raiders would share the conference crown.