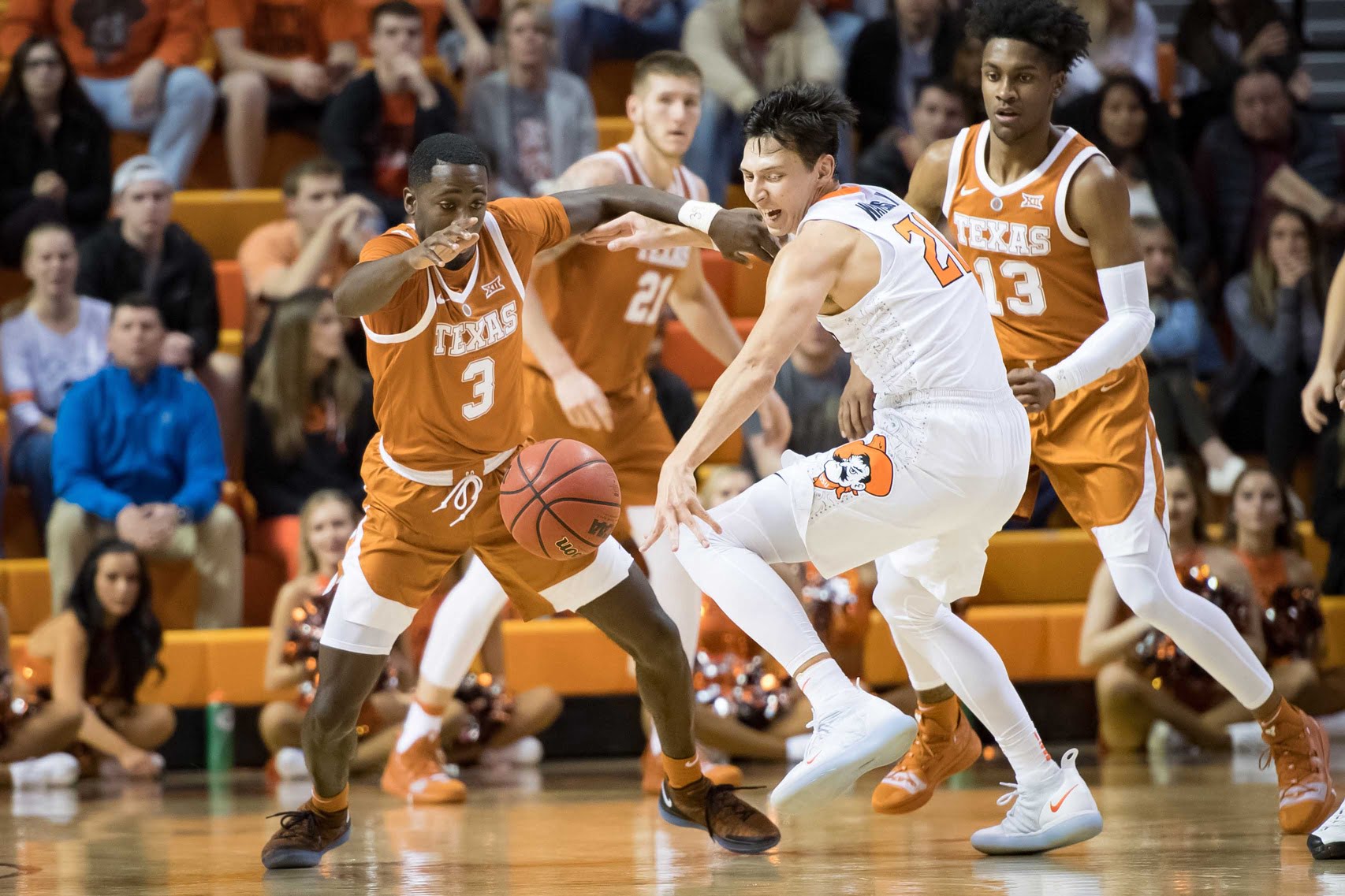 It didn’t end as pretty as it it looked at times, but the Cowboys found their first Big 12 win of the season.

Oklahoma State topped Texas 61-58 in Gallagher-Iba Arena Tuesday night in a game the Cowboys led by as many as 19. Texas surged in the second half, but a late pair of Isaac Likekele free throws forced the Longhorns into an ugly 3-point attempt at the buzzer that didn’t fall. Here are five thoughts from OSU’s seventh win of the season.

Courtney Ramey watched on as Isaac Likekele drilled a clutch pair of free throws with 10 seconds left to give OSU a 3-point lead.

On Texas ensuing trip down the floor, Ramey dribbled pump faked around the top of the arc before heaving up an awkward 3-point attempt that missed and sealed OSU’s first Big 12 victory of the season.

Ramey was one of OSU coach Mike Boynton’s top targets in the 2018 recruiting cycle. OSU looked the favorite for Ramey’s services for much of the waning hours until he chose Texas over OSU. Ramey choosing to be a Longhorn opened a spot on OSU’s roster for Liekekele.

In an alternate universe, Ramey is OSU’s point guard, while the 6-foot-4, long-armed Likekele is elsewhere showing he probably should’ve been rated higher. But in this universe, the underdog got the better of a guy he was put behind.

Lindy Waters was 5-for-5 on 3-point baskets Tuesday night.

He played in all but one minute of the game, and he was needed in all 39 of those minutes. Waters scored a career-high 19 points and ripped down a team-high nine boards to go with two assists and three steals.

It wasn’t just that he was scoring points, it was the manor in which he was doing it. There were times when the Cowboys half-court offense came to a screeching halt, but Waters would just size up his defender and do this:

That basket was Waters’ lone field goal attempt of the second half. He put up only seven attempts in the game. That’s something Boynton has said in the past needs to increase as Waters is transitioning from a secondary scoring option last season to a primary one this year.

Maurice Calloo is looking more and more like a young Cameron McGriff. It probably helps Cam McGriff is the Cowboys only venerated post player, so Calloo doesn’t have many other people to listen to.

Calloo was doing a lot of dirty work that didn’t show up in the box score. He finished with four rebounds, but three were on the offensive end. He played 18 minutes and had only one foul, something other freshmen post players have struggled with this season. Starting center Yor Anei, for example, played only 13 minutes and had four fouls.

At one point Tuesday, Calloo caught the ball on the wing with nobody within 15 feet of him, but instead of jacking up a 3, where he is 1-for-15 this season, Calloo drove the lane. His awareness of the college game is growing rapidly, and it’s easy to spot.

A week or two ago, Calloo probably would’ve went up with an unbalanced layup, instead of dropping it off to his sensei for the easy jam.

“Sometimes he is going to make shots or miss them,” Boynton said. “He may forget a play every now or then, but effort hustle and just being able to outwork your opponent are things that if he develops, he’s got a chance to be a really good player.”

OK there was a lot of offense talk, but this game was hands down won because of the Cowboys’ defense.

In the first half, the Pokes held Texas to 37 percent field goal shooting and forced nine turnovers. The Longhorns were an eye-popping 2-for-22 from 3 for the game. Sure, some were open misses that might not be chalked up to OSU’s defense, but a lot were contested misses.

“We are doing a really good job of identifying personnel who can hurt us from three and making sure we get there and close out with good length,” Boynton said. “And making sure guys who don’t shoot threes as well take maybe more than they want to.”

Texas scored only 22 points in the first 20 minutes of basketball, meaning the Cowboys’ few days of Texas prep was probably pretty good before the Longhorns were able to make some adjustments in the locker room.

“It’s who we are,” Boynton said. “It’s who we have to be every night until we have more flow offensively, and we did have some good flows offensively [tonight]. I probably over-managed the game in the second half a little bit and took them out of rhythm but in the first half, we were clicking on all cylinders.”

That was Boynton’s opening line in his postgame news conference, and it couldn’t be more true.

The young Cowboys led by as many as 19 at home and still won by a single possession. This is also an indicator of how far OSU has come, though. In the Cowboys’ first game of the season, OSU blew a 24-point lead to Charlotte, a bad team. So, to see how far the group has come is a good sign for Boynton and Co.

It was the groups first conference win in three attempts, which isn’t horrific considering the team has six freshmen and was picked to finish last in the conference. One way or another, though, the Cowboys will learn this win isn’t going to make Saturday’s game at West Virginia any easier.

“Every game is a battle,” Boynton said. “We faced a third one and finally got over the hump. We got to understand as a team that people don’t just go away. They keep competing and we got to clean up some things and be able to finish the game better. I thought a couple of our freshmen really stepped up and helped us late in the game.”