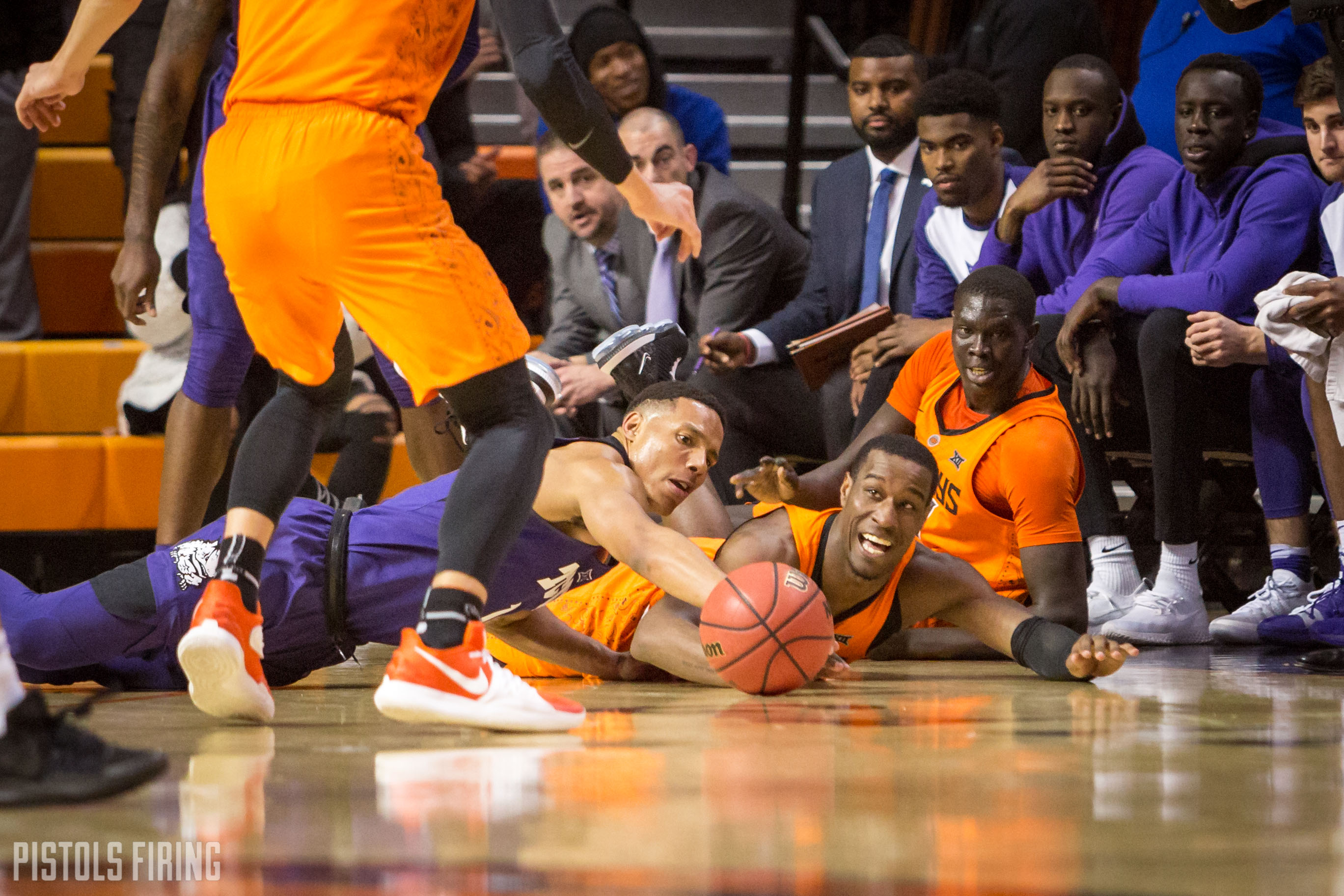 Looking back through season records, a 10-win team looks much better than a nine-win team.

Oklahoma State defeated TCU 68-61 on Monday to advance to 10-16 on the season, and the Cowboys are 3-10 in Big 12 play. It wasn’t the cleanest win, as the Cowboys were up by as many as 14 just for TCU to claw to within 2 in the final two minutes, but after a program record eight-straight conference losses, I’m sure Mike Boynton and the Cowboys will take it.

Not many nine-win team’s at this point of the season will do stuff like this:

It’s Feb. 18, OSU has to win the Big 12 Tournament to get into the NCAA Tournament, and the Cowboys still slide across the White Maple. They still take charges. They’re still going.

Is this a great basketball team? Nope, but there have been only a handful of games this season that have been hard to watch because the players are still trying.

A few weeks ago, the Horned Frogs torched OSU from deep, hitting 11 3-pointers. Monday, TCU made only five because the Cowboys ran TCU off the line, even if it meant giving up more driving opportunities. If something doesn’t work, Boynton is going to change it.

Teams are hitting 3s? Make them drive. Teams figured out the zone? Go back to man and sub a bit more to keep legs fresh. It’s progress. It’s not going to make this season look much better (but again, 10 wins definitely looks better than nine), but a team that hasn’t given up is just more fun to watch than a team that has.

After the opening barrage, Isaac Likekele scored an old-fashioned 3 with an and-1. Then Lindy Waters said, “You know what’s better than three? Four.”

Thomas Dziagwa has assassinated many people with his imaginary arrows the past two games. On Monday, he tied his 23-point career high, a mark he set Saturday, thanks to knocking down six more 3s.

This is what you call a heat check pic.twitter.com/9GeGeBpxAd

It did not go in, but it takes some confidence to shoot a free-throw’s length away from the 3-point line.

There’s a saying in basketball that teams who live by the 3 die by the 3. When Isaac Likekele hits his sixth career 3 in 21 attempts off a shot-clock heave, the Cowboys are living.

3. McGriff and Waters There When It Mattered

OSU’s two leading scorers flew under the radar for much of Monday’s contest, but at the end Cam McGriff and Lindy Waters saved the Pokes from giving the game away.

One of the game’s biggest sequences started here, when McGriff left a 3-point attempt short, but as TCU players were content with letting the ball bounce out of bounds, McGriff flew into frame to throw the ball off a purple body.

Then Waters got the ball. After OSU’s offensive set broke down, Waters felt a double team coming, so he rose and hit a tough fadeaway to extend the Cowboys’ lead to four.

McGriff was 0-for-7 from the field Monday. After the game, Boynton said he knows McGriff isn’t fully healthy. You could probably tell that with McGriff’s field-goal percentage or his 31 minutes played, a number that doesn’t seem low, but it is for him. But, you can’t tell he isn’t 100 percent when he is constantly the first guy to the ball, no matter where it’s at.

After further review, I think I’m comfortable with saying Curtis Jones is at his best when he is attacking the basket and not spotting up for 3s.

Jones struggled from behind the arc again Monday, making his first attempt then missing his next three, but when he takes to the lane, he has proven versatile.

To start, he is incredibly athletic, maybe the second most athletic guy on the team behind McGriff, so he is able to hang in the air and contort himself to avoid getting blocked. He also shows a lot of poise when he gets to the lane and is able to make the right pass more often than not if a shot isn’t there.

Jones finished Monday’s contest with 7 points, three rebounds, an assist and two steals, and he played 25 minutes, the most he has played since Feb. 2.

When Jones does make 3s, they can pile up quickly, but I’m not sure when he picked up his sharpshooter identity. I think he could be better suited for a slasher who can shoot than a shooter who can slash.

This one is quick, but toward the end of the first half TCU ran a 3-2 zone that gave the Cowboys fits.

I tweeted it would be interesting to see what Boynton draws up to combat that zone in the locker room, and what did the Cowboys do to start the second half?

Sure, the execution failed, but: