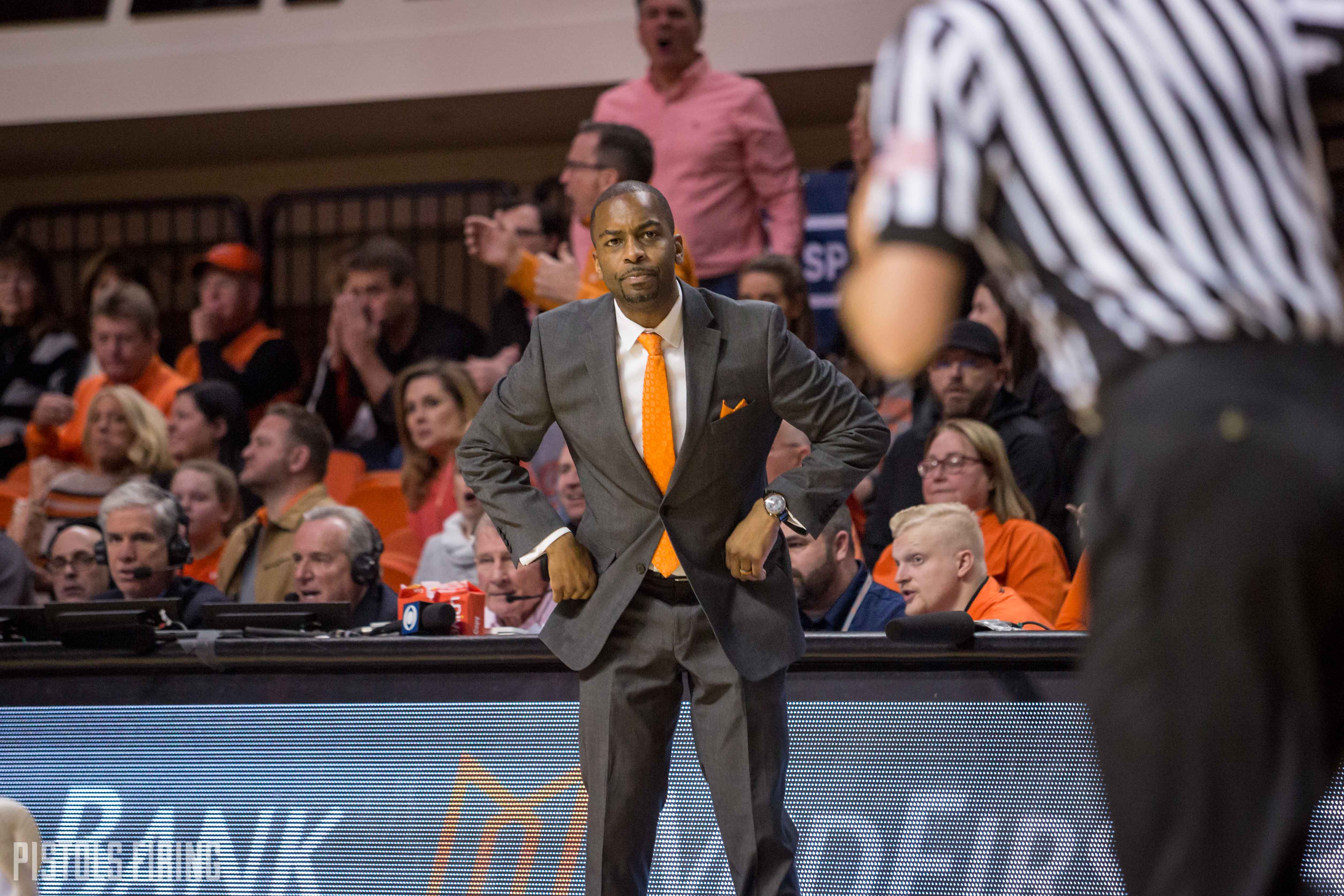 It looked like Lindy Waters was going to do it again.

In Oklahoma State’s 72-67 loss to Kansas on Saturday, Waters dribbled down the floor with 14 seconds left and his team down three. Waters was a few days removed from scoring 12 points in the final 55 seconds of the Cowboys game against Texas Tech on Wednesday, including a buzzer-beater that sent that game into overtime.

Back to Saturday, Waters got down to the northeast corner of Eddie Sutton Court, where a pair of Kansas (22-7 overall, 11-5 Big 12) defenders miscommunicated on a switch, leaving Waters all alone in the corner. Waters eyed down his shot, rose and released, but instead of sending the game into overtime again, the ball hit off the back of the rim and bounced out.

The Pokes led 37-32 at the half, thanks in large part to drilling seven of their 14 3-point attempts. Much like the game in Lawrence, the Jayhawks had a quick run early in the second half. Kansas was plus-11 from the 17:26 mark the the 14:42 mark of the second half. The Cowboys again fought back, leading by three with just under three minutes to go before the Jayhawks found a way to survive Gallagher-Iba Arena for only the second time in their past six visits.

Free throws and rebounding seem to be what did the Cowboys in. Kansas shot 23 free throws to OSU’s five, and the Jayhawks outrebounded OSU 41-34. The Cowboys didn’t shoot a free throw until midway through the second half.

Here are five thoughts from another wild OSU/KU matchup.

At the under 12 timeout of the second half, the Cowboys were down 50-47. Yor Anei was on the bench with four fouls and Lindy Waters was in the locker room with an apparent leg injury.

It looked like a prime spot to roll over and go peacefully like a 10-win team with seven scholarship guys should, but the Pokes just wouldn’t. After a few back-and-forth possessions, the Cowboys went on an 8-0 run that gave them a 60-55 lead with 7:59 left.

The Cowboys again fought as if they have more than seven scholarship players. They fought like Saturday’s game was do or die when in reality it was a means to an end. I thought the Cowboys lost all their fight against Kansas State last week, but they popped back up and are going to drag this down season across the finish line.

This season is like reenactment of “Cool Runnings,” an all-time great substitute teacher movie, the only difference is when someone asks Sanka if he’s dead, Cam McGriff replies, “Nah, man.”

There weren’t high expectations entering the year. The Cowboys were picked to finish last. There have been plenty of struggles along the way, but the team isn’t going to end the journey anywhere but the finish line.

2. Have a Day Curtis Jones

Curtis Jones has all the ability to be a dominant college basketball player, but he has struggled putting it all together at times this season.

He is agile, he is athletic and he has a quick, smooth jumper, but he has been streaky this season. Saturday the switch was flipped on, as he tied Cameron McGriff for a team-high 19 points. Jones was 7-for-9 (78 percent) from the field and 4-for-4 from 3-point range.

Jones also brought in five rebounds and was a team-high plus-eight in his 29 minutes.

The Pokes have at least three games left this season, and Jones playing at this level could make the Cowboys competitive in all of them.

Before Saturday, Cam McGriff had scored 19 total points in his past four games, shooting 16 percent from the field in the process. He scored 19 points Saturday off 42-percent shooting.

McGriff had nine points at the half and hit his first 3-pointer since Feb. 16 against Texas. He hit another 3 in the second and scored seven of the Cowboys’ final 12 points, including this tough and-one to give the Pokes a three-point lead.

Although McGriff has struggled offensively as of late, he is still doing all the little things he always does. The Cowboys entered the day having taken 38 total charges, 22 of those were from McGriff. He added to that number against KU, with his most recent charge making Boynton go nuts on the sideline: 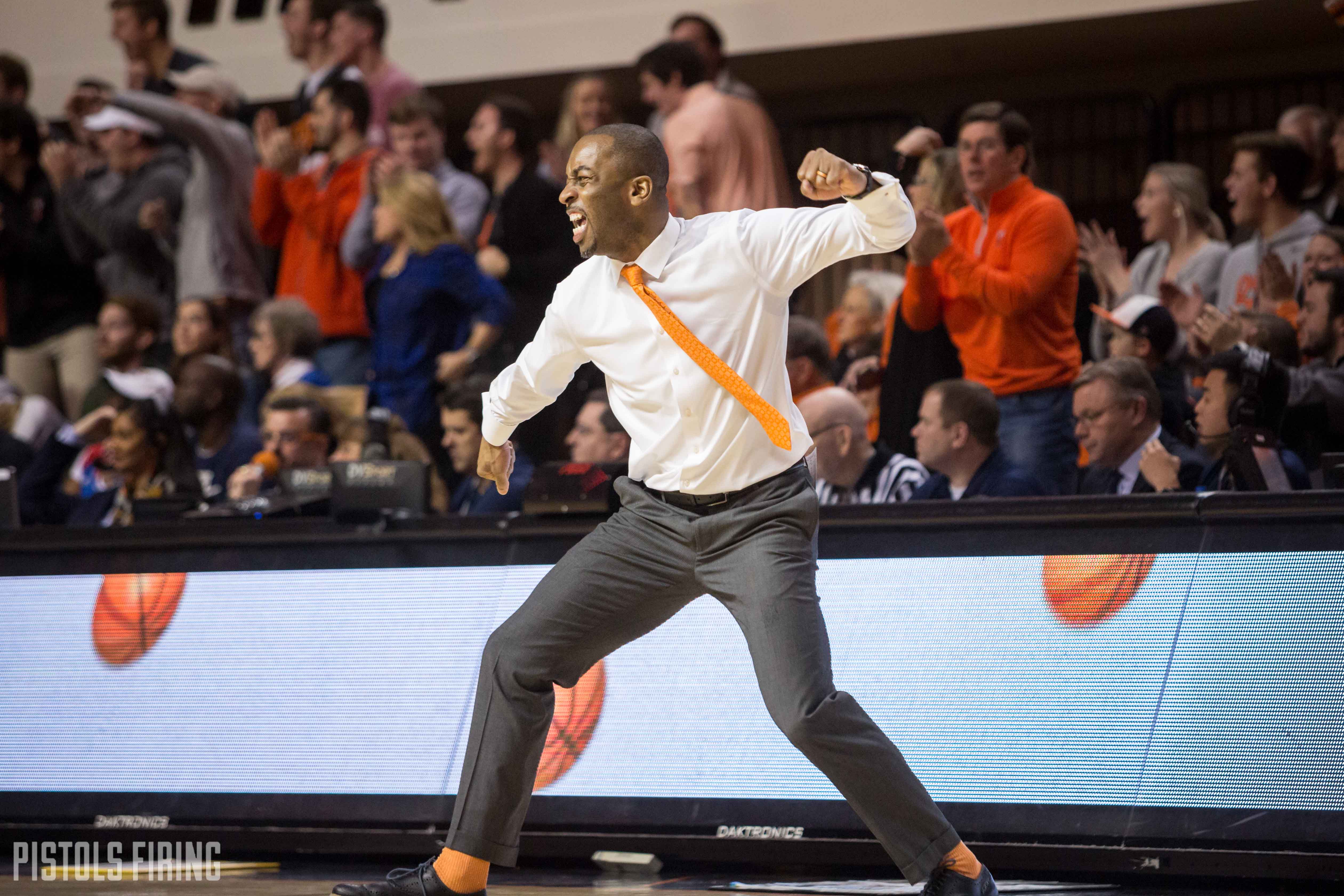 McGriff is still rebounding. He had 11 against Tech, and a team-high eight against Kansas. He is still one of the first to slide across the White Maple hardwood. He just hasn’t been as good offensively, an area that reemerged Saturday.

A week from Saturday, the Cowboys regular season will be over.

In that time, OSU will travel to Baylor before hosting West Virginia. Those two teams have defied expectations this season in opposite ways. Baylor was picked to finish ninth, yet still have an outside shot at grabbing a share of the Big 12 title, while West Virginia was picked third and absolutely stinks.

If the Cowboys want to defy some expectations, they’ll need to at least beat West Virginia. It’s likely WVU comes to Stillwater on the final day of the regular season with three conference wins, the same as OSU. The Cowboys were picked to finish 10th, and a win would prove that prediction wrong.

A ninth-place finish to the regular season would likely put OSU against Oklahoma or TCU in the first day of the Big 12 Tournament, both of which are winnable games at this point. Adding to the season beyond that looks bleak, but the Pokes have proven they can at least hang with every team but Kansas State in the conference. In a tournament format like that and a limited roster, though, it’d be tough for the Cowboys to win on back-to-back days.

Isaiah Todd and Christian Brown have seen Stillwater, and now the wait begins.

They saw 9,335 people in Gallagher-Iba Arena. They saw an undermanned team take a blueblood to the final minute, but who knows what was enough? The two, Todd especially, would be difference makers at OSU. They would be cornerstones to the program in their time here, but nobody but them knows if that’s what they want.