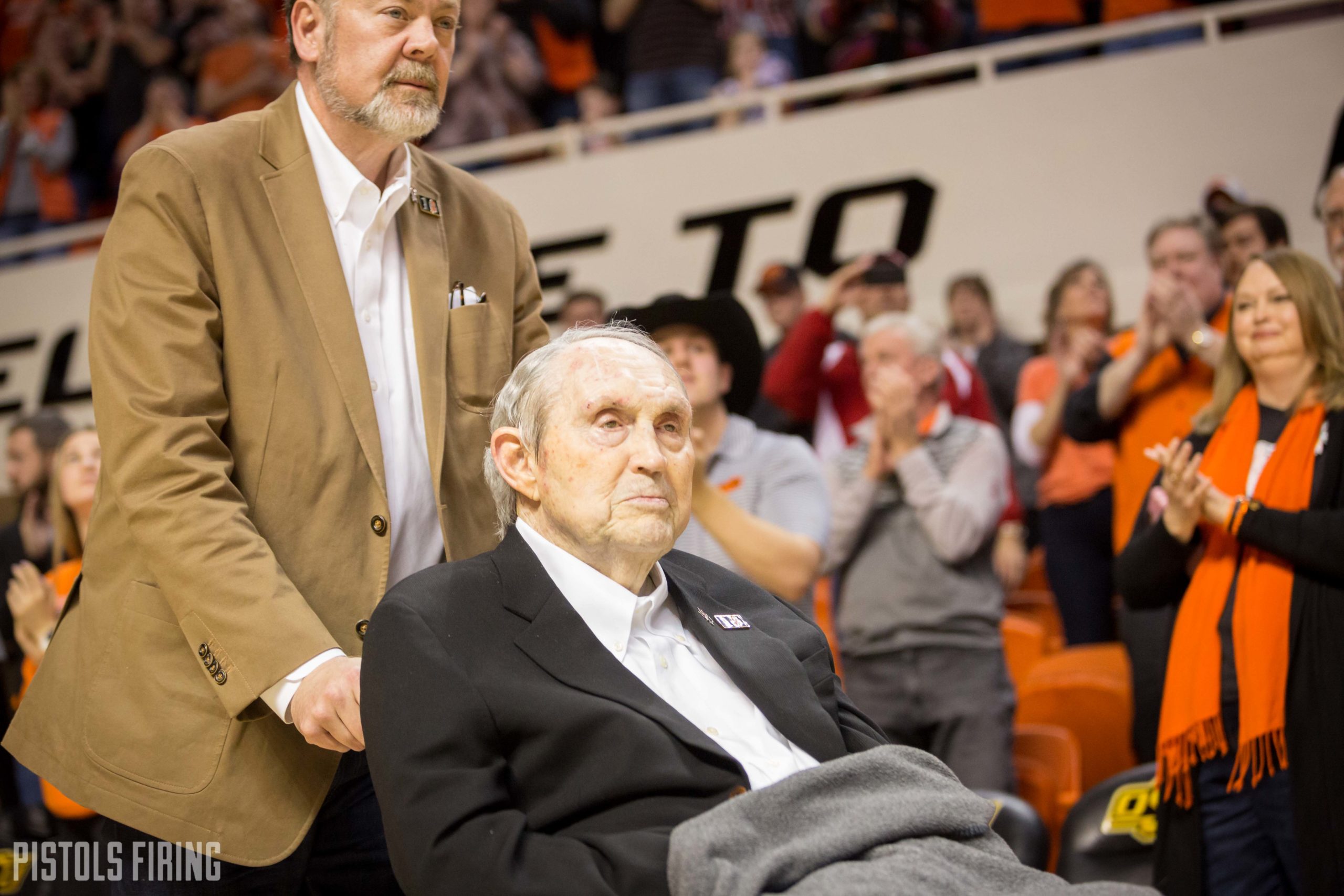 Well, not yesterday, but it was on a previous Selection Sunday. One back in 2005. One that had Cowboy fans on the edge of their seats. And one that is extremely interesting to look back on.

In case you missed it, ESPNU aired previous Big 12 Conference Tournament Championship games yesterday, and one was the Cowboys’ win over Texas Tech in Kemper Arena. I was coated with nostalgia from the opening tip, and couldn’t keep from watching the game from start to finish. Let’s get to five thoughts on the Cowboy victory:

1. The Transfer Market is … and was … massively important

Out of OSU’s seven primary rotation players, four transferred to Stillwater from a different school. Daniel Bobik jumped over from BYU in 2002. John Lucas made the move from Baylor in ’03 and the Graham twins came from UCF in ’02 to finish their college careers in Cowboy uniforms. That’s over half of the guys that led the Pokes to the Final Four in ’04. Eddie Sutton’s ability to land key transfers led to two of the best seasons in OSU history.

The benefit of transfers hasn’t slowed in recent memory either. Just last year, in Texas Tech’s run to the NCAA Tournament finals, Matt Mooney and Tariq Owens both transferred from other programs and played massive roles in the Red Raiders’ remarkable season.

Might the Pokes utilize the transfer market this offseason to put a few more experienced pieces around Cade Cunningham?

2. A Battle of Coaching Legends

Eddie Sutton taking on Bobby Knight in a conference tournament championship game. Can it get any better?

Now, in 2020, almost all OSU fans are familiar with the absurdity that is Eddie Sutton’s absence from the Naismith Basketball Hall of Fame. However, I wouldn’t have thought it was widely discussed back in ’05. I was wrong.

With about 2:00 remaining on the clock, Fran Fraschilla addressed how ridiculous the selection committee was for keeping Eddie out of the Hall of Fame. I couldn’t believe my ears. This was 15 years ago and the campaign for Eddie to be placed in the Hall of Fame had already begun! You can imagine how disheartened 2005 Fran would be knowing that 15 years later, Eddie still hadn’t been recognized amongst some of the greats.

Some well deserving people here but if Eddie Sutton & his 806 wins at Creighton, Arkansas, Kentucky & Oklahoma State Is not a Hall of Fame coach, then those other guys who are in & put their teams on NCAA probation should be out. Get real! https://t.co/OZb0padXgU

I would be remiss to discuss legends without giving Coach Knight some love. Of course, he became legendary for his on-court antics. But what I’m remembering him for now is his off-court savvy. As soon as he appeared on the screen, I remembered that he wore a Texas Tech pullover with an O’Reilly’s Auto Parts logo on the opposite side of his chest every game. The NCAA eventually had to ban him from using himself as an advertisement on camera! Gotta wonder the conversations he had with university administration on that one.

Also: how about his ability to spin his personality into a reality tv show? How could I forget “Knight School”? This bad boy aired in 2006, and as a 11-year-old, I was gripped.

Oh, and can I add that Chris Beard and Sean Sutton were on opposite benches during this game?

It’s clear the Final Four squad was one of the best in OSU history. I wanted to come up with player comparisons from the Underwood-Boynton era that matched this ’05 squad, and here is what I came up with:

Lucas was a winner. Plain and simple. In the ’05 conference championship game, he ended a 21-4 Texas Tech run by taking an outlet pass coast-to-coast and finishing a contested layup. Then, he scored five consecutive points in the final minute and a half to lead the Pokes to the W. Evans had a similar pace and takeover capability, he just didn’t have the same pieces.

This is a tough one. Curry had an unlimited ceiling, but was sometimes turnover-prone. Forte, on the other hand, was consistent from his freshman year through his ninth–I mean fifth–year. Still, both were great scoring guards with a natural feel for the game.

Okay so watching Joey Graham close the ’05 conference championship game gave me serious Cam McGriff vibes. Porter has said this ad nauseum, but McGriff would be an unreal third or fourth option on a team with a few more capable scorers. And Likekele fits in here for his defensive prowess. Stevie was a better shooter, and really a much different player than Ice from a position standpoint, but still, Likekele’s athleticism and ability to put his fingerprints on every aspect of the game places him in the twins’ company.

Both could change the game from the three-point line. Sure, Carroll might throw a dunk down that Bobik never could. And yes, Bobik was an elite defender (he had five steals in the first–yes 1st!– half against Tech) that maybe Carroll wasn’t. But, both were 6’6″ shooting guards that you wanted on the floor as much as possible.

Another tough one. I wanted to use Michael Cobbins here, but he wasn’t in the Underwood-Boynton era. Solomon’s consistency screams McFarlin, but he didn’t bring the rim protection of McFarlin, and when he is at his best, Yor’s presence at the rim reaches or exceeds McFarlin’s.

4. You Need to Read this Article about JamesOn Curry

Royce Young typically writes about the OKC Thunder for ESPN, but he completed an incredible piece on JamesOn Curry’s career that you have to read. It explains Curry’s path from the shortest NBA career in history to a high school gym in Drummond, OK.

The strongest takeaway from watching the ’05 conference championship game is how intense Eddie Sutton’s defense truly was. This is the topic of much discussion, but it bears repeating. The Cowboys weren’t the most talented offensive team out there. While Lucas and Curry could shoot the ball at a high clip, and Graham could finish around the rim at a very high level, the defense made the team go.

Bobik took charges. McFarlin blocked shots. Terrence Crawford was the first to dive on the floor. The Graham twins could cover every position on the court. The list goes on.

The number of times that a turnover or typical rebound turned into an outlet pass up the sideline to Lucas and a cross-court pass to Curry or Graham for a lay-up was unreal.

This type of energy and effort was coached. And guess what? It resembled how this 2020 Oklahoma State team turned the corner over its last 11 games. Coach Boynton and co. appeared to take a page out of Eddie’s book, and if it continues into 2021 along with some new talent heading to Stillwater, a conference championship appearance might not be out of the picture for the Cowboys.