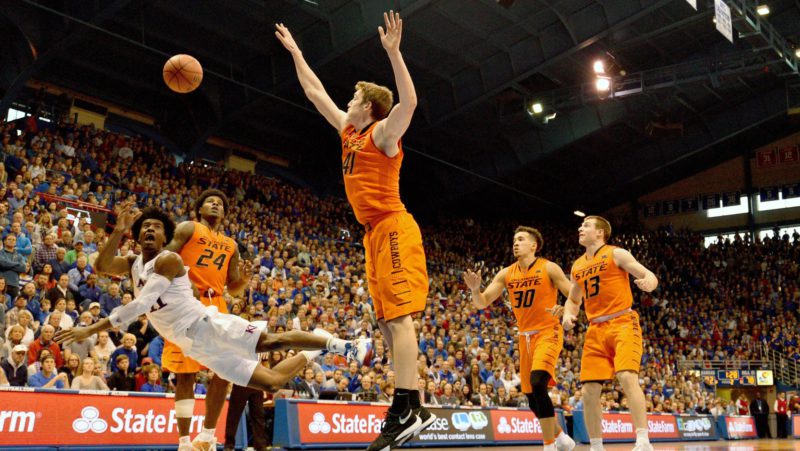 We were treated to a fantastic Big 12 basketball game on Saturday. It reminded me of about a dozen OSU games in Lawrence over the years. Exciting game with a handful of runs, Jayhawk fans booing. Bill Self looking confused and a chippy foul or two.

What else could you ask for? Well, other than about eight more points from the Pokes.

1. A fast start by the Cowboys

Oklahoma State came out blazing hot with Jawun Evans and Jeffrey Carroll driving the Cowboys to a double-digit lead before most of us even got to start watching.

The Cowboys held a 21-10 lead before Kansas went on their run to welcome us all to the broadcast. That fast start was led by the Cowboys two best players this year.

Jeffrey Carroll just continued what he’s been doing all year — rebounding, scoring, getting into the paint. But Evans had had his best start in Big 12 play and didn’t commit a foul in the first half (!)

2. All the free throws

What happened to Oklahoma State’s 11-point lead? Kansas climbed right back into the game going 12 of 14 from the stripe for a stretch. OSU had 11 first-half fouls to Kansas’ four and I’m not sure I agree with all of them…

This was called a block! And the announcers didn't question it! https://t.co/RJrDFbzi04

The second half didn’t get much better. In a game that was pretty physical late, OSU was called for 30 personal fouls to the KU’s 14, which resulted in a lop-sided free throw battle with Kansas attempting 45 to OSU’s 14. Joshua Jackson attempted three more free throws (17) than the entire Oklahoma State roster.

All in all, the Jawhawks scored 19 more points at the stripe in a seven-point game that was even closer down the stretch.

3. Jeffrey Carroll is a man

You may not call him the best player on the team but he’s played the best consistently all season. Forte has played better as of late — but didn’t shoot the bell well Saturday. Evans is the dude. But Carroll is the one I’m most confident in. If he keeps it up at this, uh, clip, I think he earns himself a spot on the All-Big 12 first team.

Mitchell Solomon and Davon Dillard had their best games as Cowboys.

Dillard showed Underwood why he deserves playing time with his effort mostly. He had six points, eight rebounds, and three assists and provided us with a this gem.

I want to tweet something about these foul calls pic.twitter.com/h8y0rPvinw

Hopefully, they can keep that up.

Also, Lindy Waters made some plays in his return from injury and put a mean choke hold on Joshua Jackson making sure he will receive all the boos each time he returns to Phog Allen’s house.

Unfortunately, after a hot start, Evans ended the game on a cold streak — finishing 6 of 22 from the field. It seemed like he missed a dozen layups in the last five minutes.

The loss isn’t all on Evans but your best player has to come up big in these type of games and Evans didn’t. Forte also went 3 for 10 from the field (2-8 from 3). Gotta have better games from both of them if you want to pull one out in Lawrence.

I’m not ripping the Cowboys on this loss, either. They have played five conference games and should have probably won two of them. Twice they’ve gone on the road to play the nation’s No. 2 team and come up short. Not a lot of shame in that. Allen Fieldhouse wasn’t too big for this young team. They just didn’t make the plays down the stretch to win.

Normally, I would say there are no moral victories but a very young team went on the road against a powerhouse Kansas squad and didn’t flinch. The confidence that some of the “others” gained might just carry over into next Wednesday, when they host Kansas State. Oh yeah. It also sets up a story-book opportunity for Brad Underwood to get his 100th win against his alma mater.