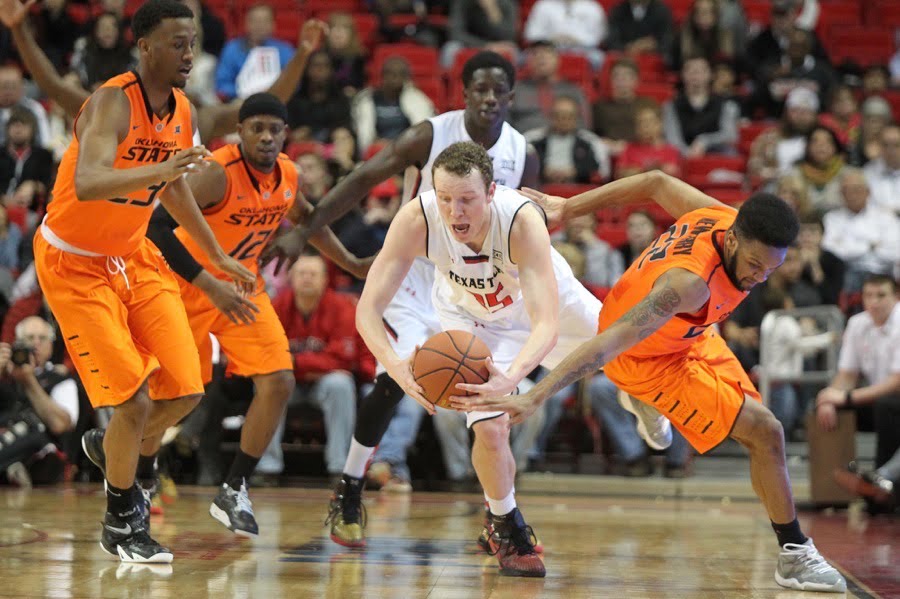 Jeff Newberry fights for a loose ball in Lubbock. (USATSI)

If the loss at TCU was a speedbump on the road to the NCAA Tournament for Oklahoma State, then the loss at Texas Tech was a full-on car crash with Travis Ford holding the steering wheel and Phil Forte riding shotgun, desperately trying to warm his hands with a busted-up heater.

There’s still time (<— Travis Ford should have this printed on t-shirts and shorts for his players) for OSU to rectify the whole thing but to do so, they must get through one or two of TCU at home, WVU in Morgantown and a first round opponent in the Big 12 Tournament.

And to do that, they’re going to have to improve in at least one of these five areas in which their ability in the last two weeks has made Jermaine Gresham look like a member of Mensa International.

OKC Dave tweeted this abomination of a stat last week and while OSU has broken into the top 300 since then (yay!), it still isn’t pretty. Next worst in the conference is Iowa State at 29.1 percent.

#okstate has collected 26.6% of available offensive rebounds this year, good for last in the B12 and 316th overall.

The curious part about this is that the two best at this, according to KenPom, are Mitch Solomon and Anthony Allen and Ford apparently refuses to play Allen.

I realize the numbers are probably a bit skewed and that there are far more important reasons to not play Allen, but I’m offering solutions to isolated problems here.

This has been a huge issue during the four-game slide.

West Virginia, Texas Tech and Iowa State have all gotten over 40 percent of available offensive rebounds and WVU got over 50 percent! That means over half of the rebounds available after missed WVU shots went to WVU.

That has to change or OSU is going to be prepping GIA for the NIT in a few weeks.

I feel like I write this in every single postgame recap, but Oklahoma State’s second half trapping and pressure seems to parallel with its success on the offensive end.

Why do we wait to apply that pressure until we’re down 18 to crappy teams?

If only for the psyche of the team, come out in a full-court press on Wednesday against TCU and just let them have it. If you get down 10-2, who cares? That was probably going to happen anyway. No reason to go down dodging punches instead of throwing them.

Play Griffin and Hickey at the same time if you need to. Throw those two along with the length of Newberry, Carroll and Cobbins at teams and watch them wilt.

Of course you might go 5-minute swaths without scoring anything but a layup but layups on steals are kind of the point here.

I hope this doesn’t come across as my “Mr. Unreliable” moment because I love Phil Forte. I think he’s the player everyone always thought Keiton Page was but I also think he’s been egregious the last few games.

It’s become clear that he’s putting a ton of pressure on himself and doesn’t really know how to get out of his funk. He seems level-headed enough that a two-game stint as the first man off the bench would do more good than harm.

How’s this for an oddity — in the last three games, OSU has essentially shot the same on 3-pointers as it has on 2-pointers.

Either ramp up the 3-balls or stop taking long, contested jumpers (looking at you, No. 12).

I know nobody wants to hear this, but OSU could just as easily be 2-2 over the last four games as 0-4. The Tech game goes Tech’s way in the final minute probably, what, 20 percent of the time?

And OSU had the Iowa State game in hand.

“That’s the point!” you might be saying…to which I would point out that Travis Ford’s record in games decided by six or less at OSU is 32-30.

That’s not great but it’s not the atrocity we all probably thought it was.

So let the big man (Nash) eat tonight, throw some pressure at TCU, get Forte a little rhythm heading to the Big 12 Tournament and all is well.

Maybe I remain optimistic because I’m scared to even consider the alternative.