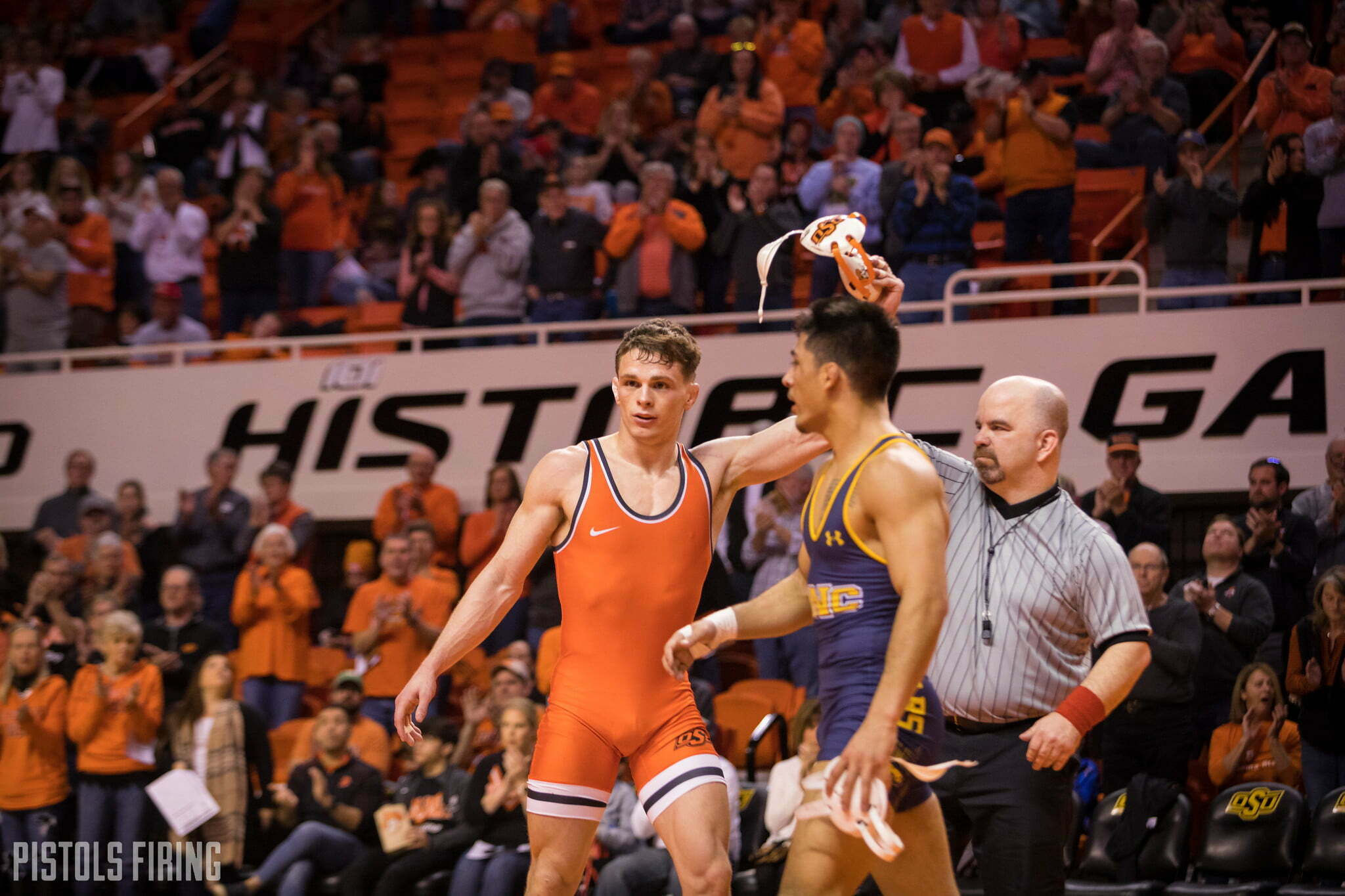 The Cowboys have a two-dual homestand this weekend in Stillwater against South Dakota State on Friday night at 7 p.m. and then Missouri on Sunday at 2 p.m.

For my preview this week I thought I’d take a look at the five wrestlers I think fans should have their eye on over the course of the weekend.

Fresh off becoming the consensus No. 1 149 pounder in the country, Lewallen will have some tough tests with two ranked wrestlers this weekend. On Friday he’ll meet up with 11th ranked Henry Pohlmeyer. The last time the pair met Boo went down with a shoulder injury that ultimately took him out for the season. This will be Boo’s first test with that No. 1 target on his back.

On Sunday he’ll come back and wrestle 5th ranked Brock Mauller in another tough test that will be his second highest ranked opponent of the season.

The true freshmen went 1-1 in his two matches vs. ranked wrestlers in Iowa this past weekend. Here he’ll have two tough but winnable matches vs. Allan Hart and Zach Price. Can he put together wins here and move up the rankings a bit more? It’s an important story-line to follow as every match could impact his shot at a bid for the NCAA tournament.

Sheets had a great Southern Scuffle to start the month and finished 3rd after coming in unseeded. He followed that up with a few more solid dual wins and up until last weekend in Iowa was looking about as good as we’d seen him so far in his career.

He had a bit of a setback in Iowa dropping both of his weekend bouts. He has a chance to get a few back this weekend with SDSU’s Colton Carlson and Mizzou’s 11th ranked Jarret Jacques. It will be interesting to see how he shakes off last weekend and performs here.

Montalvo is quietly growing and improving match to match. He’s picked up a few ranked wins and only has one loss since the Southern Scuffle which was to 4th ranked Taylor Lujan of Northern Iowa.

Here he has a chance to get another ranked win against Zach Carlson on Friday and another potential resume builder on Sunday with Mizzou’s Dylan Wisman. Both very significant matches that could play a role in deciding the duals.

The wrestling and football worlds collided this week as it was announced that multi-time state champions Brock Martin and Malcolm Rodriguez would be joining the wrestling team for the remainder of the season. Both are big time athletes and it’s conceivable that Martin could try and work his way into the lineup at heavyweight.

They’ve only been in the room for a few weeks, so it’s difficult to expect their conditioning to be up to par, and naturally they haven’t competed at wrestling at a high level in years. It could certainly be that the current heavyweights on the roster continue to hold down the spot for a while, but Martin and Rodriguez are both there to compete, so it will be interesting to see if anything happens here.

As it’s been for the Cowboys all year and will continue to be, both this duals should be battles. The Cowboys will be favored in each, but you could certainly see a number of scenarios where the other schools could pull the upset.

South Dakota State is on Friday at 7:00 PM with Missouri on Sunday at 2:00 PM. If you can’t make it to Stillwater you can stream them live on ESPN+.