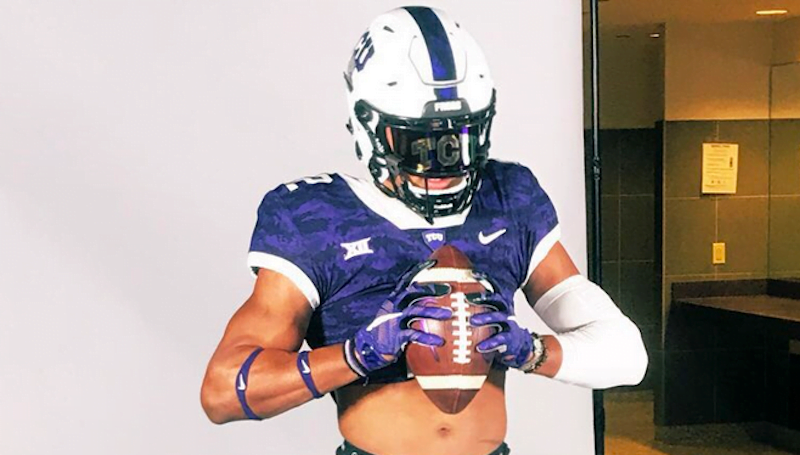 Former TCU running back signee Dominic Richardson, a Class of 2020 in-state star from Bishop McGuiness, announced Friday morning that he has joined the Oklahoma State program as a late addition to its now-finalized 2020 class.

Richardson gives the Cowboys a needed shot of youth at the position and a potential starter in a post-Chuba world in 2021.

Richardson originally committed to TCU last May and signed with the Horned Frogs in December, but Gary Patterson and company recruited over him by taking a late commitment from five-star prospect Zachary Evans that effectively left Richardson without a scholarship. He re-entered the market in May because of the situation.

During his recruitment, OSU did not offer Richardson — the staff instead prioritized Daniyel Ngata, Kevontre Bradford and others — so OSU wasn’t the no-brainer landing spot this time around. But in May I raised the idea of a potential win/win scenario that would land Richardson in Stillwater: OSU did not end up taking a running back in the cycle after its top targets went elsewhere, and Richardson needed a home. It’s unclear why OSU didn’t more heavily pursue him the first time around, but it’s a huge boost to the running back room regardless.

He has great size, plays physical, and has some moves to his game, too. Here’s how 247Sports’ Gabe Brooks evaluated him:

Prototypically built running back prospect with good height and mass. Already well-built but could probably add a bit more good weight while maintaining athleticism. Possesses the build to maintain a high-volume workload. Runs with impressive balance and adds yardage to runs most HS backs wouldn’t. Not one to string moves together, but size and running style allow for yards after contact. Glances off defenders to let balance take over. Shows just enough wiggle to make a defender miss in 1-on-1 situations.

At his best as a north-south hole-puncher. Shows encouraging initial burst. Arrives at the second level with vigor. Athleticism has not been verified in a testing environment. Occasionally will unnecessarily bounce runs to the perimeter. Can improve top-end speed. Tough runner who does not go down easily and should develop into a quality Power Five starter in the right situation. [247Sports]

As a senior last season he rushed for 1,719 yards and scored 17 times. And as a sophomore, he logged 2,135 yards rushing and scored a whopping 26 times — earning offers as early as 2017 because of his blend of production, size and speed.