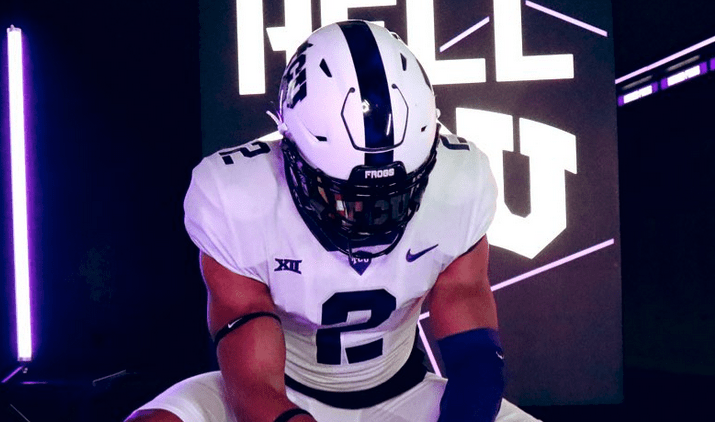 Bishop McGuinness running back recruit Dominic Richardson signed with TCU in December as the program’s lone incoming player at the position. But five months later, the Horned Frogs have signed two more running backs to crowd the position (including five-star Zach Evans) — and now Richardson is back on the market.

Richardson hails from the Oklahoma City area and held more than a dozen scholarship offers as a recruit before picking TCU. Among those who offered were Arkansas, Colorado, Iowa State, and Kansas. Oklahoma State showed interest but never offered. He’s been granted a conditional release and can now explore other schools.

Richardson, who is 6-foot, 205 pounds, was initially believed to be the only running back in TCU’s recruiting class when he signed in December. But TCU signed Mount Enterprise’s Kendre Miller as a running back in February, and landed Galena Park North Shore five-star RB Zach Evans earlier this month. [Fort Worth Star Telegram]

Essentially, TCU over-recruited Richardson. They made a spot for him when he committed and signed, but five-star Zach Evans fell in their lap and they suddenly didn’t have a scholarship for him. This is precisely the shady business of recruiting that happens during recruiting cycles but rarely happens after a player signs. (It’s also precisely the situation that comes back to bite coaching staffs in the hiney. This is mega-ammo for other staffs to negative recruit against TCU.)

Richardson was ranked by 247 as the No. 8 prospect in the state of Oklahoma and, on its face, his situation could be a good match for an Oklahoma State program that didn’t end up signing a running back this last recruiting cycle. As it stands now, OSU appears to be primed to take at least two commitments from players in this cycle — with three-star Jaden Nixon already in the fold and several other targets on the radar.

The size he could bring to the table at OSU could really be a boost. OSU doesn’t need a player to come in and take on a massive role from day one with Chuba Hubbard’s return, but his physical ability and bruising style could help him contribute early as he matures. Here’s how one scouting report evaluated him:

Prototypically built running back prospect with good height and mass. Already well-built but could probably add a bit more good weight while maintaining athleticism. Possesses the build to maintain a high-volume workload. Runs with impressive balance and adds yardage to runs most HS backs wouldn’t. Not one to string moves together, but size and running style allow for yards after contact. Glances off defenders to let balance take over. Shows just enough wiggle to make a defender miss in 1-on-1 situations. At his best as a north-south hole-puncher. Shows encouraging initial burst. Arrives at the second level with vigor. Athleticism has not been verified in a testing environment. Occasionally will unnecessarily bounce runs to the perimeter. Can improve top-end speed. Tough runner who does not go down easily and should develop into a quality Power Five starter in the right situation. [247Sports]

As it stands OSU heads into 2020 with Chuba Hubbard and LD Brown as its 1-2 punch at the running back position. Junior college transfer Dezmon Jackson is in his second season with the program and redshirt freshman Deondrick Glass could be in line to get touches after sitting in 2019.