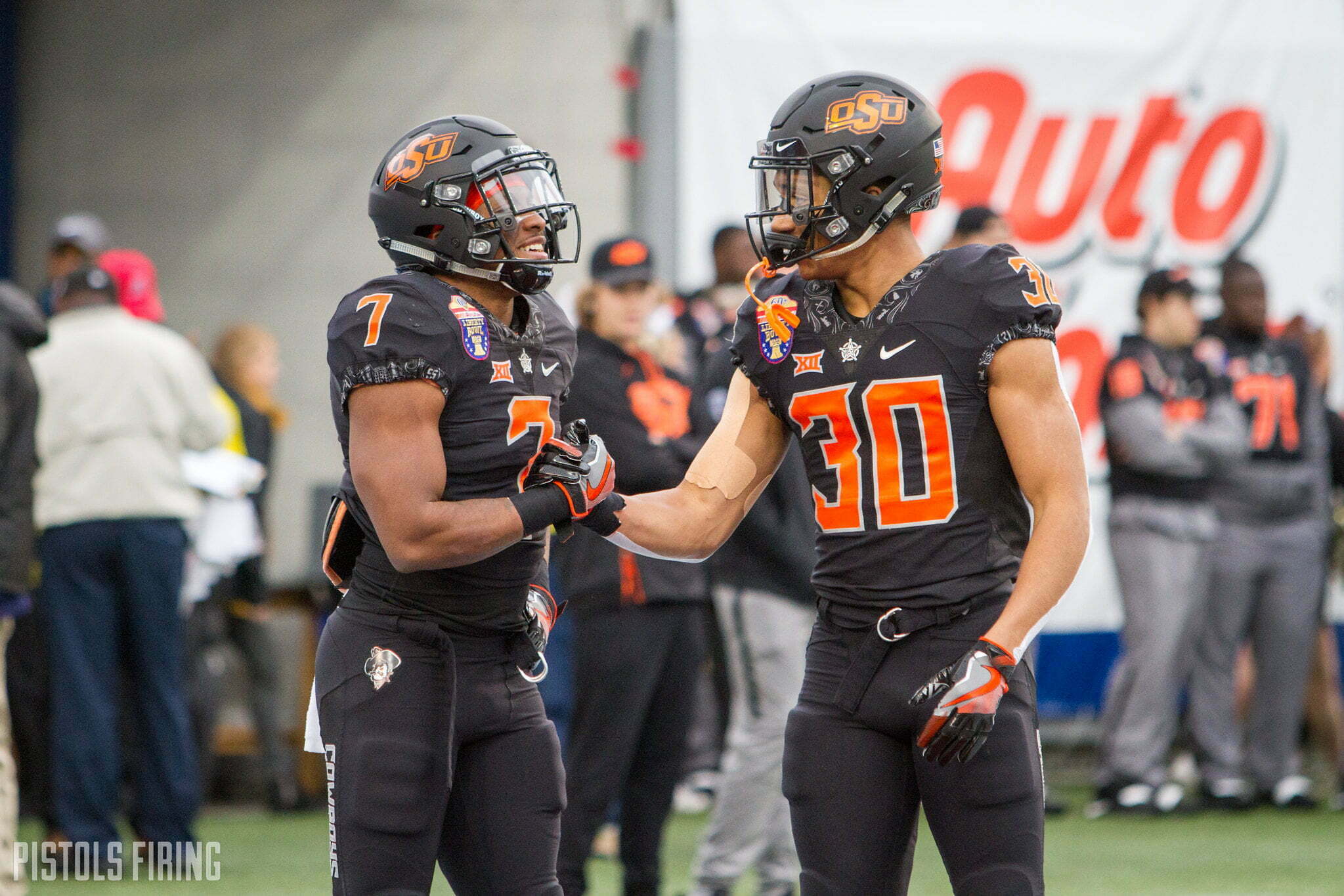 I previously laid out my concerns for both Oklahoma State’s quarterbacks and wide receivers, now let’s turn to the third prong of the Cowboys’ offensive attack. Here are four burning questions for OSU’s running backs.

In 2019, Chuba exceeded even the most optimistic of expectations. Justice Hill’s promising supersonic sidekick from 2018 turned into the nation’s leading rusher and the only OSU player not represented by an emoji (🐐) to hit the 2,000-yard milestone in a single season.

My first thought is to intuitively point to Chuba’s increased workload down the stretch. He was without OSU’s No. 1 receiver in Tylan Wallace for the last five games of the season and without its QB (and second-leading rusher) Spencer Sanders for essentially the last three. Surely that contributed, at least somewhat, to his ridiculous usage.

I know that there are other, situational factors that contribute to those numbers, but that’s a very tedious way of illustrating that we can’t credit injuries to ancillary playmakers for Chuba’s enormous workload.

The good news is that with the entire Big 3 all back, and assumed healthy, it should be even harder to corral Chuba. Hopefully he can do more with less to save some of the beating on his legs. But yes, I believe he is very capable of putting up another monstrous season. Now an important followup to Question No. 1.

OSU’s rushing load was historically top-heavy in 2019. LD Brown managed just 40 carries for 221 yards. That’s the fewest attempts and yards by a No. 2 Cowboy RB in two decades. And that was back in 2001 when Oklahoma State averaged just 93.6 rushing yards per game as compared to last year’s 229.6.

Part of that was the fact that Spencer Sanders was OSU’s No. 2 rusher, but there have been several dual-threat QBs that came in second over that span including Bobby Reid, Zac Robinson (three times) and J.W. Walsh.

The point is that Chuba shouldered an historic amount of the offense in 2019 and, fortunately, didn’t get bit by the injury bug. But is that sustainable for back-to-back seasons?

For OSU’s year-long success, it might be better to save some of those miles on Chuba’s legs for the NFL, especially early, and then go to your workhorse when you need him.

Which brings us to…

As noted previously, there weren’t a lot of carries to be divvied up between RBs 2 thru whatever. Aside from LD Brown, the only other tailbacks on the roster that have seen any game action at OSU are Micah Cooper (7 carries for 12 yards), Deondrick Glass (2 carries for 8) and Dezmon Jackson, who hasn’t even taken a handoff but caught one pass for 9 yards.

Glass and Jackson each came in with his own hype last year, which you would have hoped would have at least translated into noncon reps. That didn’t work out for either thanks in part to injury (at least in Jackson’s case) and now, without the luxury of a full spring, both have a lot of catching up to do.

Whether it’s Brown or one of the other three listed, someone is going to have to step up in practice and on Saturdays to prove they can be a viable alternate to No. 30.

Even if Chuba rushes for 2,500 yards and drags OSU to a national championship, unfettered by injury, he’s Gone.GIF in 2021. So is LD. Now those same questions about the other guys become even more pressing.

I’m not sure how confident I am that any of those three above can be a No. 1 back on a team competing for the Big 12. And there’s not a ton of help coming in either. Oklahoma State did not add a running back in the 2020 cycle and has just one rusher committed, three-star Jaden Nixon, so far for 2021.

So while Chuba’s decision to return was a huge boon for OSU in 2020, it may also have been a stopgap for a glaring issue heading forward.