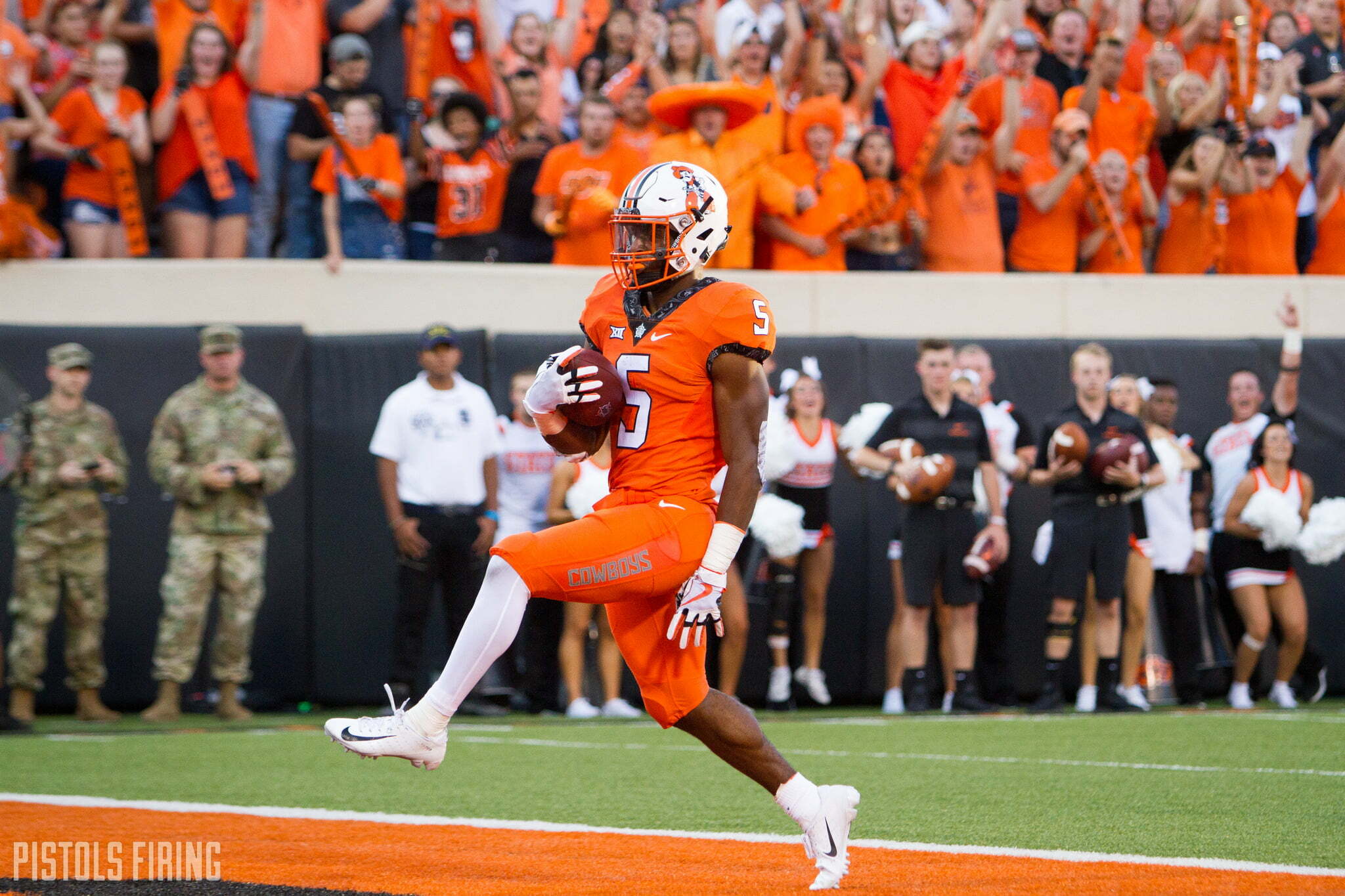 The Liberty Bowl has come and gone, and even though some may say it’s too early, it’s time to start talking about next season. With the early signing period taking place in December, I’ve been primarily covering the 2019 recruiting class. However, now that the early period is over, I wanted to start talking about what big impact players won’t be returning for the Cowboys in 2019.

Below I’ll discuss four players, two on each side of the ball, who I think the Pokes will miss the most next season.

Justice Hill — Even though OSU is returning a talented running back like Chuba Hubbard and has the possibility of signing a highly touted recruit like Deondrick Glass, any time you lose a guy who can break off runs like the one shown below, it’s a big loss.

Hill is one of the most talented running backs in school history, accumulating 3,539 rushing yards on 632 attempts (5.6 yards per attempt) and 30 touchdowns. In addition, he tacked on 304 receivers yards on 49 catches and added another touchdown. That’s nearly 4,000 total yards during the course of his three-year stint in Stillwater.

He’s explosiveness and big play ability made him a threat every time he touched the ball. Defenses had to pay attention to him at all times, allowing things to open up for Oklahoma State’s other offensive weapons.

I think the running back position is in good hands with Hubbard, and will get an additional boost on January 14 if Glass decides to sign with OSU. Either way, losing a guy of Hill’s caliber will be a blow to this offense.

Larry Williams — Outside of Hill, the bulk of the Pokes lost production from 2018 is from quarterback Taylor Cornelius. TC put up big numbers and scored a lot of points for this Cowboy team. However, I am optimistic that whoever wins the QB job in 2019 will be able to put up some quality stats of their own. That said, I decided to go with offensive lineman Larry Williams for my second selection on the offensive side of the ball.

At the start of the season, the guards listed on the depth chart were as follows (2018 classification included):

Along with the guys listed above, Deionte Noel, another redshirt senior, also saw action at the guard position. As you can see, the Cowboys only real contributor returning is Marcus Keyes. Keyes is a really good player at left guard, but there are two guard spots on the offensive line, and someone will have to fill the right side. And, although Williams made his share of mistakes, he was a solid offensive lineman who did a good job in pass protection, and was often able to get to the second level to spring OSU running backs, as shown below.

The early favorites to man the right guard position are walk-on Ry Schneider and talented freshman Hunter Woodard. Schneider showed his versatility on the line working at both center and guard, and Woodard is an exciting young player who received a lot of reps during the bowl practices, but a veteran like Williams will be tough to replace.

Jordan Brailford — Brailford led the Pokes in sacks and tackles for loss in 2018. That type of production will be tough to make up for as the Pokes head into 2019. In addition, they lose defensive ends Jarrell Owens and Cole Walterscheid. Brailford’s loss would be a big blow even if everyone else on the 2018 roster was returning, but with Owens and Walterscheid also out of the picture, this might be the biggest loss for the Cowboys at any position.

Brailford was able to create havoc in the opposing backfield game in and game out, and was one of the primary reasons OSU finished the season 12th in the country in sacks.

Oklahoma State still has some talented guys left on the roster, such as Brock Martin and Mike Scott, and they add a talented recruit in Trace Ford, but the loss of Brailford on the defensive line is a massive one.

Darrion Daniels — There are a few guys I could’ve gone with here. Linebacker Justin Phillips was the team’s leading tackler and one of the primary leaders of this Cowboy defense. However, although losing him can’t be ignored, the Pokes return a lot of talent at the linebacker spot. In addition, losing safety Kenneth Edison-McGruder is a big blow. He was another leader of this defense and had a great season for OSU, but the Cowboys have a lot of skilled youth at the safety position and I feel optimistic about that spot moving forward.

So, I decided to go with the position that I think will be one of the weakest for Oklahoma State in 2019… defensive tackle.

Daniels only played in four games in 2018, but managed to tally 7 total tackles, including one sack against Texas Tech. In 2017, Daniels broke out as an absolute monster in the middle of the OSU defensive line, an example of this shown in the following video.

It’s not so much his missed production from 2018, but with Enoch Smith Jr. and Trey Carter also leaving, Daniels choosing to transfer hurts that much more. Smith and Carter were out of eligibility, but Daniels had the option to return. His absence will be felt on the interior of the OSU defensive line in 2019, especially since there is little to no in-game experience returning.