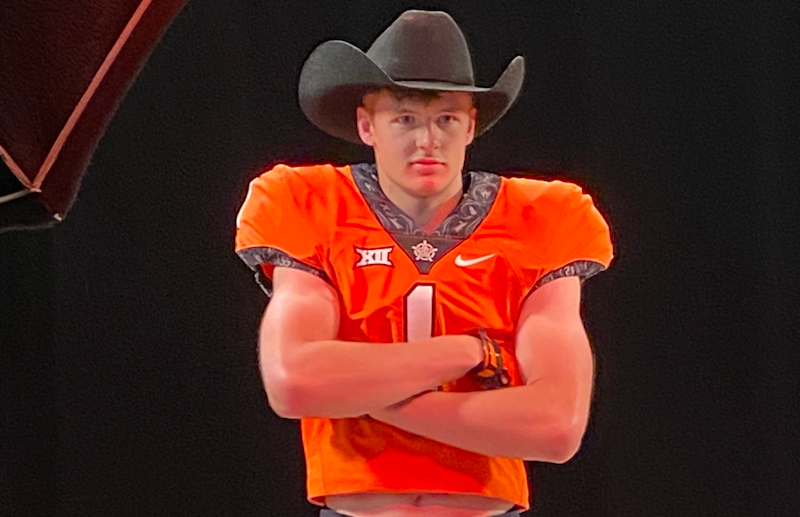 OSU lost two big talents at receiver this week with both Braylin Presley and Langston Anderson among the many who hit the transfer portal. But the Cowboy coaching staff is already in the mix to land an elite talent in the 2024 class as it aims to restock the cupboard for the future with four-star talent Gatlin Bair including the Pokes in his top 11 schools this week.

Bair is a 6-foot-2, 180-pound talent from Burley, Idaho, who thus far has already earned more than 15 offers. His narrowing to 11 isn’t a major cut, admittedly, but OSU made the list along some heavy hitters that also includes Michigan, Boise State, Oregon and Stanford.

At 6-foot-2, Bair brings a tantalizing combination of both size and speed to the receiver position. He’s a multi-sport athlete who also plays basketball and runs track at a really high level. Here’s what Gabe Brooks of 247Sports wrote when scouting him earlier this year:

The 6-foot-2, 180-pound Bair possesses excellent on-field context along with a layered athletic profile, which includes scorching 100-meter and 200-meter times with excellent jumping numbers. Bair also gained reps in the return game. His athleticism and experience certainly fit at receiver, but he also possesses immense upside as a defensive projection as well.

Bair is one of many offers for OSU in the 2024 cycle but thus far no recruit has committed to the Cowboys in the class. That’s not for lack of effort, though. Bair is one of seven offers at receiver and one of roughly 60 total offers already sent in the class.

While Bair is the fourth-highest ranked offer for OSU at receiver in the 2024 cycle, he carries a four-star grade at both 247Sports and in the 247Sports Composite rankings, which averages out all the rankings from recruiting services. 247Sports ranks him as the No. 179 overall player in 2024, No. 34 at his position and the No. 1 prospect from the state of Idaho. At the time OSU offered him earlier this year he was outside the top-300 of the national rankings and a three-star recruit. Since then Michigan, Mississippi State, Nebraska, Colorado and Washington have all offered.