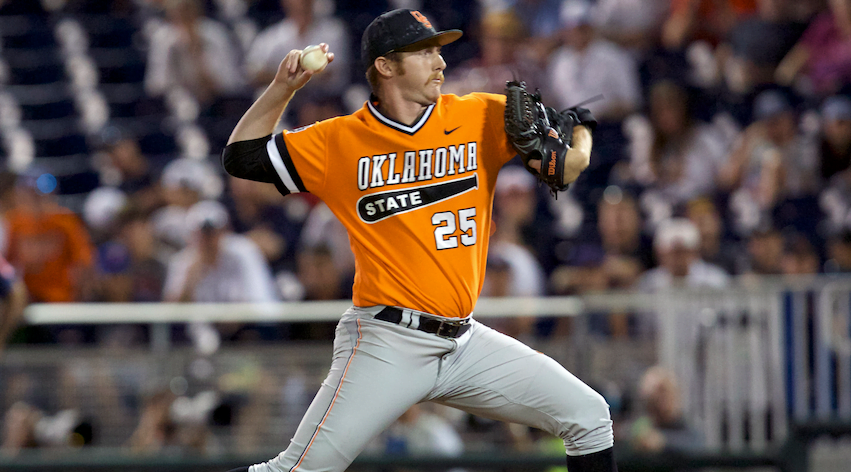 Cobb, OSU’s typical closer, has been out for the Cowboys since mid-January because of elbow soreness in his right throwing arm. Before Heasley ever took the mound for the Cowboys, Cobb saw his potential and approached the developing situation with grace.

“I expect not to have my job back when I come back,” Cobb said.

Heasley was stunned that a senior, a guy on the front of the media guide, was telling him this.

“I expect you to go out there and dominate,” he recalled. “They need to find something for me to do when I come back.”

Cobb said when he charted Heasley’s pitches in the fall, he knew he would be a stud.

“He’s gonna be able to do whatever he allows himself to do,” Cobb said. “This kid would have been our No. 2 last year on our staff behind (All-American Thomas) Hatch, as a freshman.”

Heasley said that conversation meant a lot to him, but his first throws in an OSU uniform weren’t great, despite Cobb’s fortunetelling. In the second game of the Grand Canyon series, Heasley came in as a reliever in the eighth inning. He faced six batters, gave up three hits and four runs with a walk.

He said it was nerves.

“You’re just sitting down there in the bullpen, just waiting to hear your named called,” Heasley said. “Kinda felt like I got out there the first time a little too amped up. I almost lost all feel for mechanics because I was so nervous.”

Cobb said from what he saw, Heasley’s adrenaline was just too high. It seemed as if he reverted to what was comfortable in the moment, he said.

“He goes in there and forgets everything Rob teaches and just goes right back to whatever you did in high school,” Cobb said.

There are eight true freshmen pitchers on the OSU staff. Heasley said he was he was a little worried he might have blown his shot at piercing the relief rotation.

When he came back to the park the next day, he walked up to pitching coach Rob Walton, who is known as a wizard in correctional pitching. Walton didn’t have much to say, but acknowledged the rough day and prodded the youngster forward

The encouragement helped Heasley know he was going to get another chance and that the staff had faith in him to go back out after a botched first try. When he learned he was going to start that next Tuesday, he said he was a lot more composed heading in.

In his first start, Heasley went five innings, allowed two hits and no runs against Arizona State. He said he realized how different the game is in college from high school. Cobb said he knew that’s how it would go.

“It was something that anyone could watch and be like, ‘This kid’s gonna be special.”

Four days later, he was in his first save opportunity and gave up a loss-clinching sacrifice fly in the Cowboys’ 12-11 loss against Texas State. Heasley said coming in as the closer was a completely different feel. It was something he had never done before.

Luckily, Cobb was there.

Since Cobb has been out, he has grown into a sort of player-coach role, he said. His desire to coach after his playing career has spiked after seeing the other side of the game, he said.

Cobb said using his coaching eye, Heasley’s got the juice, but that’s not hard to notice. He posted a 29-3 high school record with a 1.47 ERA and more than 300 strikeouts at Prestonwood Christian Academy in Plano, Texas. He had a perfect 13-0 record as a senior with a 0.33 ERA.

“He’s just a guy who has incredible stuff; he has big league stuff,” Cobb said. “On the mound, he’s 94-96 with a nasty slider, good curveball, changeup.”

Cobb said he knew by Heasley’s demeanor and confidence that he would fill the innings he left behind with his injury.

“When you look at him, you don’t see him as a freshman,” Cobb said. “He’s had success his whole life on the mound, and he just doesn’t know what not having success is like.”

Although Heasley has never been a closer, he said he is eager for the opportunity. It’s a different feel having to wait seven or eight innings every game, and the daily rehab is different. But Heasley says he kinda likes the pressure of being a freshman closer on a team that went to the College World Series last year.

“You can be the hero or the zero,” Heasley said. “But I like coming into situations like that knowing I have to shut it down.”