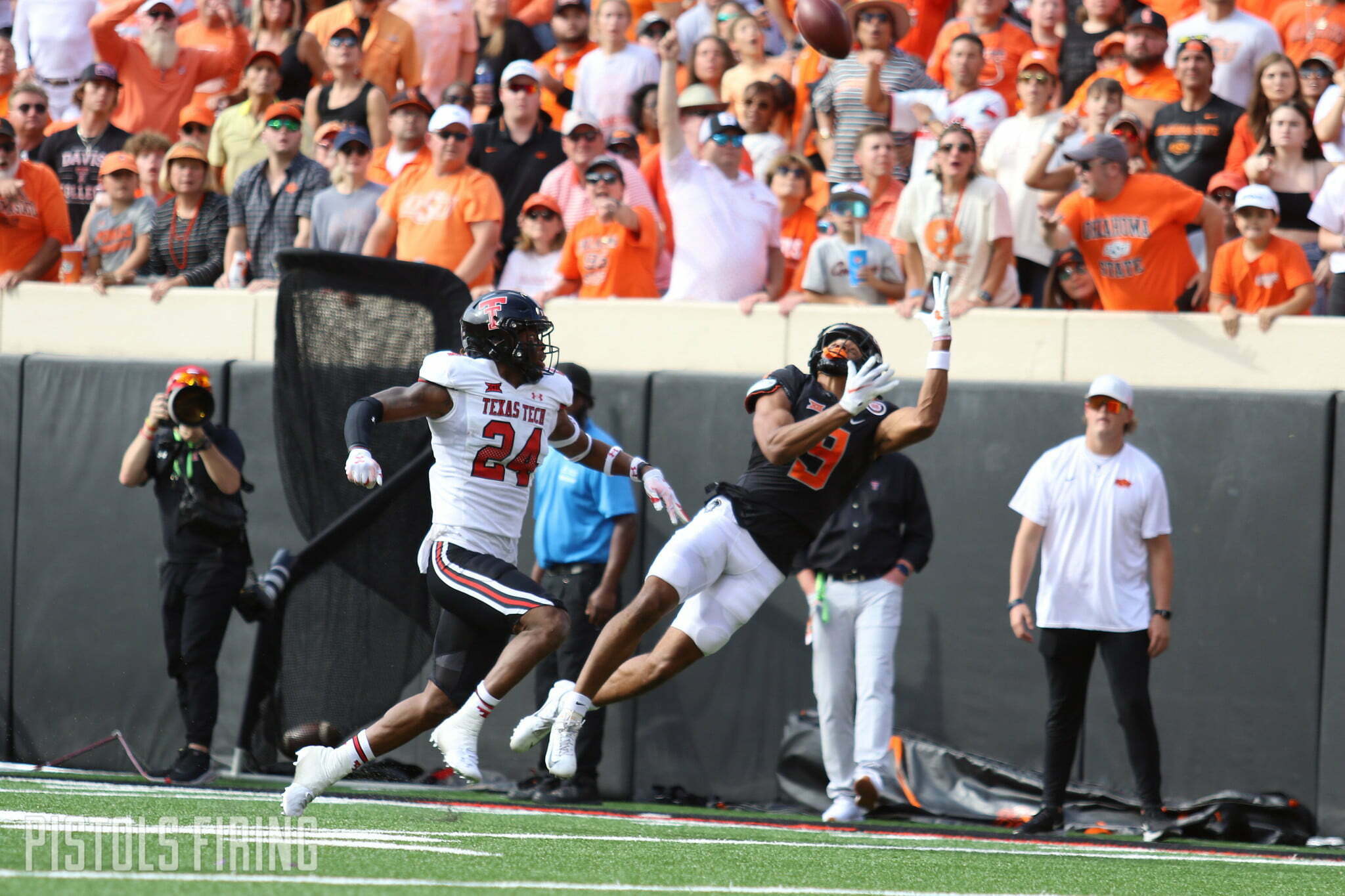 Was it easy? With Oklahoma State, it rarely is. But on Saturday in front of a sold-out crowd at Boone Pickens Stadium, the Cowboys again emerged victorious to improve to 5-0 on the season with a 41-31 win over visiting Texas Tech, finishing with an 18-0 run to close it out in style.

Here are our grades for the game.

OSU’s special teams for years was so costly and so poorly coached, it was always among the most relevant gripes for OSU faithful. But no more! I’m here to report: it is 100% a strength of this team. Welcome to bizarro world!

Special teams impact goes beyond the return game and return yards, and no better example of that came early in the game when Demarco Jones, after Texas Tech struck first with a score, called for a fair catch after Tech attempted an onside kick. Tech recovered, but because Jones had the awareness to call for a fair catch in this situation, Tech was called for catch interference — and OSU got the ball in great field position. It scored two plays later. It’s not hyperbole to think that this play might have been the difference between a win and a loss on Saturday. Somebody get this man under the neon palms ASAP.

He didn’t lead the team in total receptions (that was Brennan Presley) and he was relatively quiet in the second half (for reasons that remain unclear?), but holy smokes, Bryson Green! Welcome to adulthood!

Green led the team with 115 yards receiving and a tuddy in the game with some absolutely unreal highlights in at least three of them. He was a massive comfort blanket for Spencer Sanders down the field in big situations, and he constantly came up with contested catches in clutch situations. For instance:

And also for further instance:

And also one more time because HOLY BRYSON GREEN!

What an unreal day. Jaden Bray got back to playing in limited action and he’ll continue to carve out a role for himself, but Bryson might’ve cemented himself as one of Sanders’ most favorite targets until further notice.

Sanders didn’t have the most efficient outing — he was 22 of 45 passing for 297 yards, one rushing TD, two rushing TDs and no picks — but he continued on Saturday to look like the most prolific QB talent in the Big 12 (and the one you want when the chips are down). He had 17 rushing attempts for 56 yards and marched OSU down the field on a time-draining drive up by a field goal late to take the 41-31 lead and effectively end the game. That drive included several clutch runs, a couple laser beams and some moxie to top it all off. Fittingly, it gave him 29 career wins at OSU as the starter, surpassing his head coach, Mike Gundy, and moving to second all-time in that category,

There’s good news and bad news with respect to the defense, so let’s get to the good first: the second half it looked really good! Tech scored just seven points the entire third and fourth quarter and was able to pitch a shutout after the 8:40 mark in the third quarter. So Tech didn’t score the last 23+ minutes of the game as OSU rallied from behind. The bad news . . .

… well, the bad news is the bad news, and that was whatever we witnessed in the first half from OSU’s defense. Busted coverages everywhere, chunk plays given up over and over again, defensive line looking a little pedestrian. QB Behren Morton had a field day slicing up the secondary. He went for 39-of-62 passing, 379 yards, two scores and an additional 46 yards rushing and a rushing score. This was all while Tech jumped out early and compiled 24 first-half points. Credit goes to the OSU staff and its players for making in-game adjustments and clamping down when it mattered, which they’ve been exceptional at the last few years, but the first half was pretty concerning especially considering how big-play susceptible the secondary has shown itself to be at times this year.

OSU got the win, so seriously, I wouldn’t dare question any decision Mike Gundy and his staff made. A win is a win. That said, OSU’s opponents two weeks in a row now have been the unquestioned aggressor. Baylor last week let it all hang loose, going for it on fourth down five times to OSU’s one time. On Saturday against Tech it was a similar story: Tech went for it on fourth down seven times to OSU’s one time. Instead, OSU settled for field goals or short punts on several occasions, potentially leaving points out there and playing field position. It has worked the last two weeks just like it has worked thus far all season — OSU is 5-0! — but the hyper-conservative nature with which Gundy coaches could bite the Pokes at some point if more aggressive teams continue to play the way Baylor and Tech have. Eventually the extra possessions and going for it are going to be tough to overcome with more field goals.

When OSU opened the season with Dominic Richardson, Ollie Gordon, Jaden Nixon and Deondre Jackson on the roster, the assumption — and what Mike Gundy told us all offseason — was that there’d be a committee with each of the backs splitting roles. But Richardson frankly has been too good and too productive to cede work for most of the season (and especially on Saturday). He had 19 carries for 67 yards, two receptions for 24 yards and one giiiiiiiigantic touchdown late to effectively seal the win. I wouldn’t be surprised to see Jackson and Gordon get more work as the season progresses, but Richardson is the clear No. 1 and he’s earned the majority of the reps at RB with the way he has played this season. Hat tip to him, and a major hat tip to the coaching staff for taking him in 2020 after TCU took another RB and he went back on the open market. Been a very solid addition the last few years and has really emerged this season as a difference-maker.

It’s been a frustrating start to the season for second-year receiver Jaden Bray, who until Saturday had not played in a game after sustaining a hand injury in the preseason. But he finally saw the field Saturday for the first time since last season, and it was encouraging what we saw. In a limited role he brought in just two catches for 24 yards and also had a rush that went for negative-two yards. But what really stood out is his ability to demand targets. He got eight of them on the day, and while that led to just two catches, it’s clear Sanders loves looking his direction. The production’s going to come and his big-play ability when he gets to full speed is going to unlock even more explosiveness in this offense.