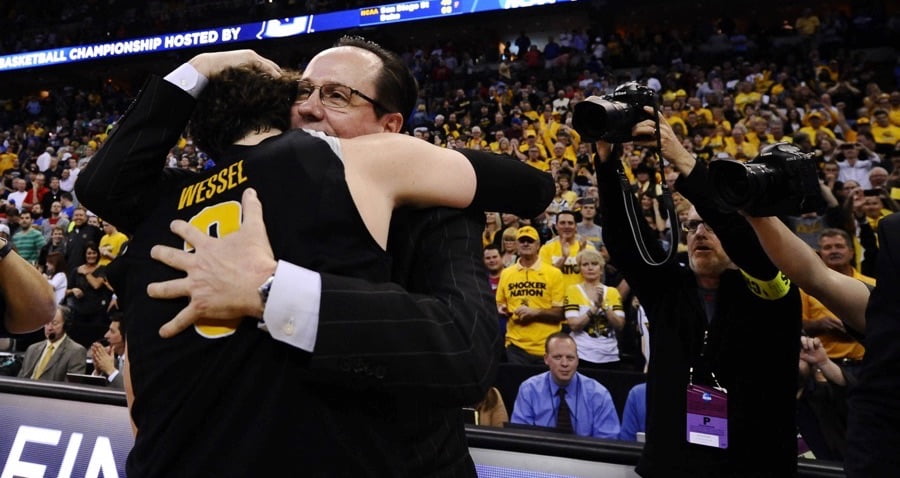 Gregg Marshall is headed to the Sweet 16. (USATSI)

That headline should read “Gregg Marshall or someone like him,” but I ran out of room in the box where you type all the letters.

As Wichita State unwound Bill Self’s Kansas squad on Sunday, a number of folks on Twitter (myself included, jokingly albeit) posited that Marshall would look sharp in some orange and black sometime soon.[1. Although, I’m not sure beating Kansas is actually our problem right now.]

That’s never going to happen, though. And it doesn’t have as much to do with Oklahoma State as much as it does with Marshall.

Gary Parrish wrote about this two years ago when Marshall seemingly turned down the UCLA (!) job before it was even offered to him.

“I’m already making seven figures,” Marshall said. “You can eat a lot of steak and hamburger and pizza for what we’re making at Wichita State . … I live on the golf course. We have a beautiful backyard. My wife has four dogs. She gardens. We fly around on private planes to Napa and back to South Carolina. We have a good life, man.”

The Marshalls do have a good life, man. And here’s the thing: It’s not really a unique life for a college coach anymore.

It would take some serious cash to get somebody like Marshall. Like, life-changing cash. You’d probably have to pay upwards of $8 million a year combined for him to jump and Ford to not coach (i.e. his buyout).

OSU could lose their next 50 games in a row and doubling Gundy’s salary for OSU’s basketball coach would still never happen. Especially with OSU hoops bleeding money like it is.

As Parrish goes on to point out, the problem with firing somebody like Travis Ford is that you have to hire somebody that’s probably completely unknown.

And whichever athletic director finds himself in need of a coach next March is probably also going to have trouble hiring a coach, because the era of overwhelming a candidate with millions of dollars and a perceived better opportunity is mostly over.

These days, almost every attractive candidate is already in a position he perceives as pretty good or great, at least in part because he’s probably already making millions of dollars.

There’s one solution to this (again, an unknown one) and he wore two 4s on his back in college. As we’ll look at later today, though, that’s not going to happen either.

At least not anytime soon.