Gundy has four years and a little under $10M left on his current contract, but the twitters were all a-flutter last night with talk of the new deal he’s been negotiating for a week. It started with a few not-so-innocuous Dave Sittler tweets then DeShazo and Pokelahoma started the #GundyContractDemands hashtag and we were off to the races.

Here’s how Sittler kicked things off at the end of the work day yesterday:

I’m not sure how much I buy into that, especially considering Haisten’s contradictory answer to a question later on: 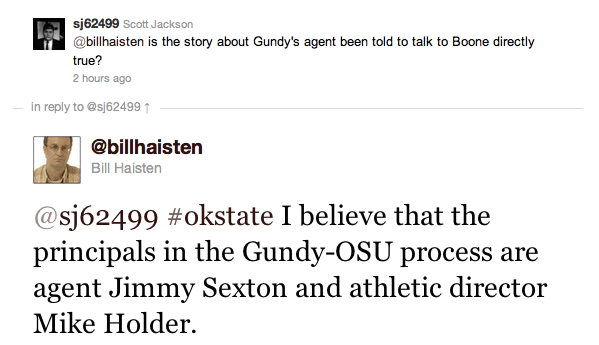 But that seems to be where the incongruities end. Everyone I’ve talked to (and to be fair I haven’t talked to that many people) and/or read in the last few days has said some variation of the following two tweets:

The second one bothers me more than the first. Can I understand why the negotiation is “rocky” and “not going to be resolved any time soon”? No, but I can at least fathom it. The second statement however, the one about how the higher ups at OSU have basically trashed what Gundy has done in the last three years because they think you or I could have done the same thing, if true, is a comical misjudgment by the Holder camp as to what this program actually is.

Sure, the facilities are nice and Boone’s direct deposits help, but you have to have somebody with some moxie running the show, and Gundy has been more than capable. In fact, I’ll give you two good reasons they should overpay him in his next contract:

There’s no possible way this botched negotiation can be about money. Nothing OSU has done in the last 10 years has included cash as a variable (well, except the time Boone lost hundreds of millions in the stock market…) and this is no different.

This is about power, who has it, and who’s giving it. The three-way tug-of-war between Boone, Holder, and Gundy makes for fun jokes on Twitter and enjoyable banter between fans.

It does not, apparently, make for smooth contractual negotiations.