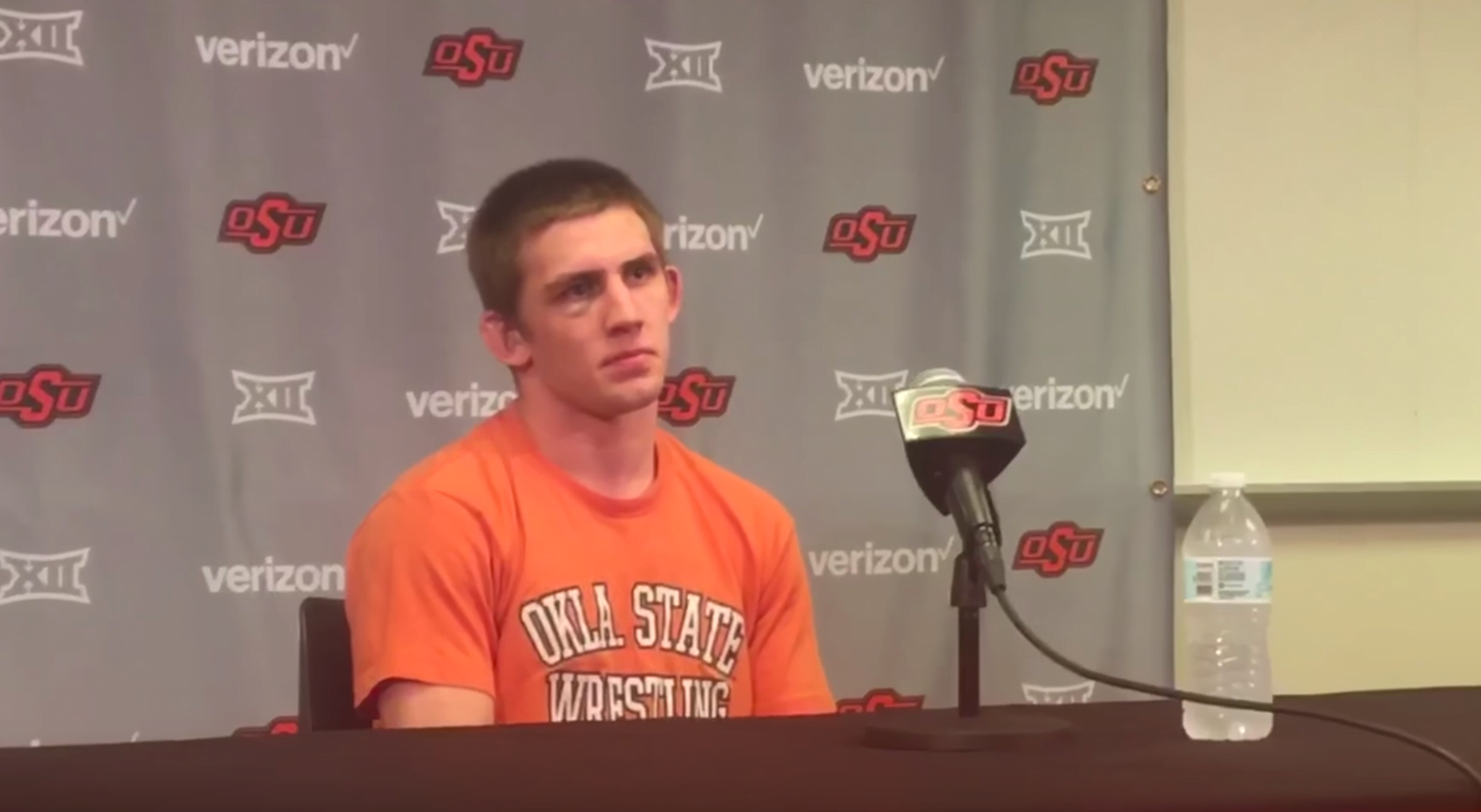 As coach John Smith addressed the media after his Oklahoma State wrestling team lost in a dual meet for the first time in almost a year, Dean Heil looked beside himself.

He bent over in his chair while he waited to sit and talk about the Cowboys’ 27-13 loss against Penn State on Sunday before a record crowd in Gallagher-Iba Arena. With a blackened right eye, he put his head in his hands and stared at the wall.

Smith had said his team’s problem is recognizing that, though many of the Penn State wrestlers have higher credentials in world events, they are still college student-athletes. He said that’s OK, but, with his team captain about 10 feet away, he said you have to compete.

“If you’re not a competitor, you’re nothing,” Smith said. “You’re mush. And I thought we had a couple mush matches. Let’s grow. Let’s be a little bit more fired up about our performance, and let’s move forward.”

After Smith finished speaking and Heil took a seat at the microphone, he gazed through the reporters and paused after almost every question. After a seven-second pause, Heil said it hurts to hear Smith say his team was, “mush,” and lacked effort.

“I’ve been a part of two prestigious programs both at Oklahoma State and going back to St. Edward (High School), and I’ve constantly been on a team that has been second,” Heil said. “I was second to Blair all four years in high school, and now it’s second to Penn State or Ohio State or whoever’s been ahead of us.

“When coach uses words like that, it hurts. It should definitely motivate us. If it doesn’t, then I don’t know why you’re wrestling here at OSU.”

Smith said he isn’t a rah-rah guy. He said there isn’t much of a benefit in losing and learning from it. He said the guys need to be more motivated, but Heil said that doesn’t happen in the wrestling room among he and his teammates.

“We don’t, but we should,” Heil said. “I think what happened this dual is we didn’t wrestle like a team. Over the past couple duals, we wrestled like a team. We had that chemistry, and this dual, I just felt like we didn’t really wrestle for each other.”

Heil said it starts with him.

“I honestly take full blame for kinda how our team has developed,” he said. “As a returning national champ and a team leader, I can say that I’ve been a horrible team leader to my teammates.

“Last year I worked with Kaid (Brock) a lot. Maybe if I worked with Kaid more this year, maybe he would have got that tech (fall). I wrestled pretty poor in my match. Maybe if I put up that major (decision), it would have motivated Anthony (Collica) to do better in his match. Yeah, he wrestled one heck of a match, but maybe instead of stressing him out before it from watching a match, if I did better, I could have fired him up.

“Maybe if I was a better team leader in the room, was more talkative, was more, ‘motivational,’ in the room towards my guys, maybe you would get a lot of guys who wrestled better, or went out and did instead of just tried.”

There were a lot of guys who didn’t, “do.” But, again, that’s on him to be a better leader and work with his teammates to not just, “try,” he said.

“I need to do a better job on my part just to be a better leader,” Heil said. “I’m just not doing that. I definitely will be making changes just how I am and how I act towards my team in these next couple weeks coming up.”