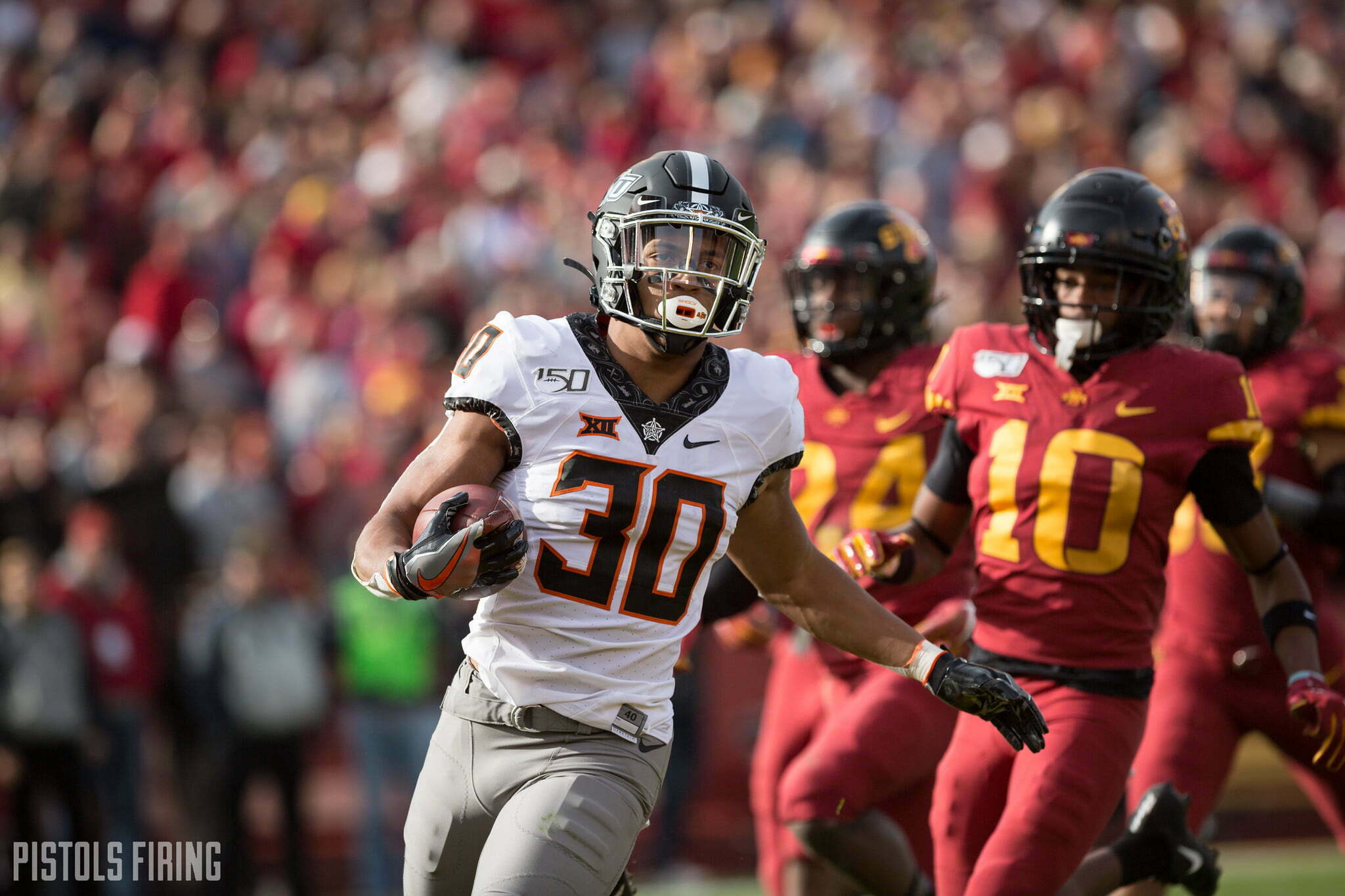 Why would Chuba Hubbard return to school?

That’s a question I’ve been thinking about a lot over the last few days and weeks. At the outset, it doesn’t make much sense. Elite back with a shelf life foregoes many dollars to return for zero dollars and take 250-300 more hits next season.

While there are several reasons for Chuba to turn pro, I also think there are a handful of reasons (and one very, very big reason) why Chu would come back to Oklahoma State. I’ve put together a completely and totally unbiased list of 1,000,008 reasons why 30 could be wearing orange and black for OSU next year and not the Cincinnati Bengals.

1. Short Stint at RB1: Chuba has now started just 16 college games following his Canadian high school football days. All of us look at the stats and think, How can he get better? NFL scouts though don’t look at the stats. They look at the tape and say, Yeah, you can get 10 or 15 percent better here and here. NFL football is very different from college football. They care about pass-catching. They care about blocking. Stuff that kind of matters in CFB really matters in the pros. Improvement in certain areas could represent a meaningful leap in next year’s NFL Draft.

2. Draft Grade: This is related to No. 1. I heard from multiple folks that his draft grade was good but not tremendous. Not an obvious “you should go pro right now” grade (more on that below), and because he’s played so few games I think there’s probably room to grow there. If he was a junior who had started three straight years, it might be a little bit different.

A good example of this is Utah’s Zack Moss. He could have come out and would have been drafted last year, but he came back, had his best year ever and is now projected to go between Round 1 and Round 3.

3. Higher 2020 Profile: You know how many national folks knew about Chuba Hubbard this time a year ago? Not many. We think they did because we did. Or maybe we think they should have. But they didn’t. This year though? He’ll be a preseason Heisman dark horse (or maybe favorite). He’ll be talked about all the time, especially if OSU is good. Maybe that stuff doesn’t matter, but it certainly seems like it matters for guys like Jonathan Taylor when it comes to the NFL. Even if it only matters five or 10 spots in the draft, that’s still a ton of money (we’ll get to that).

4. Worse Class: This is a moving target, but Chuba is probably the fifth back in this class. Here’s who most would have ahead of him (Etienne hasn’t declared yet).

Next year could be different. It’s always fluid and based on team need — even up to the days before the NFL Draft — but the only site I could find that had 2020 and 2021 RB rankings had Chuba 5th in 2020. But it had all four guys ahead of him declaring, and the 2021 guys it had ahead of him (Kylin Hill of Mississippi State and Eno Benjamin of Arizona State) are also declaring. So by default it had Chuba as the No. 1 RB in 2021.

Depending on how good the newly-eligible 2021 RBs who declare are, it’s not crazy to think that Chuba could be a top-two or top-three NFL prospect at his position next year. Especially when getting away from this loaded class. Mel Kiper’s rankings were similar. He didn’t have 2021 backs, but for 2020 he has Chuba 5th, but with all four ahead of him leaving.

5. Combine With Nothing to Prove: If Chuba declared this year, he would go to the NFL Combine trying to prove that his year wasn’t based on a system and wasn’t a fluke. Two years in a row of 2Kish yards though? There wouldn’t be much to prove. Either way, he’ll kill at the combine.

6. Big 12 Title in Play: Maybe this isn’t about the NFL Draft at all. Maybe Chuba simply wants to play one more year with his friends? It’s almost always at least a little bit about the money, but if you combine the fact that he could feasibly improve his financial windfall substantially (we’ll get there) with the reality that OSU is suddenly sitting pretty to be one of the top two or three teams in the Big 12, maybe the decision gets percentage points easier.

7. Fewer Touches: This was Gundy’s promise after the Texas Bowl.

“Chu got tired during the season a little bit and had some time to rest, got fresh. We’re unbelievably excited about him next year. I think there’s a really good chance he’s on our football team next year. I don’t think any of us could say 100 percent.

“We’ll be in a position to protect him a little bit next year. He won’t have to carry the ball 30 times a game. Will be around 20 times a game if that all works out for us because we’ve got some maturity behind him.”

I don’t totally know what that maturity is — maybe Deondrick Glass or Dez Jackson or a revamped LD Brown — but I do believe Gundy here, and Justice Hill is proof.

8. The Big One: Again, I’ve heard his draft grade somewhere outside of the 1-2 range. This makes sense based on the process players go through. Here’s a snippet.

The new ratings are much simpler: potential first round, potential second round, or neither, which is effectively a recommendation to stay in school. If a student-athlete’s goal is to play in the NFL, his best chance at success may be to stay in school, earn his education, improve his Draft position and complete his college football eligibility. [NFL]

These ratings are normally quite accurate. Here’s more.

In 2017, 140 total players were advised to remain in school by the College Advisory Committee (3rd-round grade or below). Forty of those 140 players declared for the 2017 NFL Draft after being advised to remain in school. The average draft position of these players in the fourth through seventh rounds was consistent with the evaluations provided by the NFL clubs. [NFL]

Their average round drafted was 5.4. There were only two top-two round picks out of the 40 that declared after being told to go back to school. I believe based on info I’ve heard that Chuba is in this group that was not given a Round 1 or Round 2 grade. So let’s say best case scenario is that he’s a high third-round pick in this year’s draft as the fifth-best RB (last year’s fifth-best back was pick No. 74 — round 3, pick 10). This year’s class is better so let’s say Chuba is pick No. 64, first in the third round.

Last year, the first player in the third round — Zach Allen of Boston College — earned a contract (including signing bonus) of $4.3 million. That’s a ton of money. However, let’s say Chuba improves his status next year and becomes the second-best back in the 2021 draft. Last year’s second-best back — Miles Sanders of Penn State — went in the middle of the second round and signed for $5.4 million. Depending on how comfortable you are with injuries, that’s a $1 million bump to go back to OSU and play with your buddies for one final season. You know, if the math works out. If he can play his way into the front of the second round that gets into the $7.5 million range, which is a $3 million bump. Everyone in the first round last year signed eight-figure deals.

So who knows what’s going to happen. I think Chuba stays. Some still think he leaves. I wouldn’t blame him either way. But if there’s a case to be made for him staying, I think this is at least part of it.