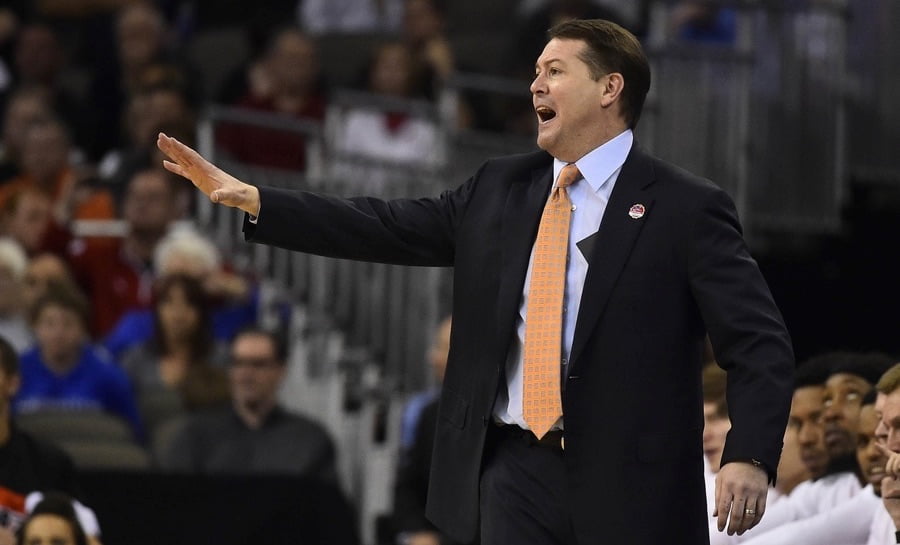 Travis Ford is (somehow) keeping his job another year. (USATSI)

Travis Ford and Mike Holder addressed the media firestorm on Wednesday and chatted with a small group of folks about Ford’s job and the future of OSU hoops.

Mark Cooper, Robert Allen and John Helsley all wrote good pieces (Helsley | Cooper | Allen) on what went down but I wanted to take a closer look at some of the quotes and offer some of my unsolicited commentary.

First up, the head ball coach.

“Things get out there that just aren’t true and then you gotta start handling certain things with your own team.”

Well, ok. What was out there that wasn’t true? That OSU was considering buying out Ford? Did that just get completely made up? No, it didn’t. I get that Ford has to say this but I hate it when people disparage sources and reports.

“That’s where we were both kind of like, wait a second here, where’s this coming from. From that standpoint, yeah, once we did that, we thought, wow, we may need to put something out here to make sure they understand that’s not the case.”

Does “we” mean him and Holder or him and his wife?

“I think that for some reason there had started to become speculation on certain things because of, just wrong information that was out there,” Ford said. “So I appreciated that he did that. That was nice.”

This was about the Boone tweet. I bet it was nice.

I’m fairly certain that Travis Ford does not want to get into what his kids are or are not doing on Twitter.

“It still keeps me up late at night at this point thinking about, why? And I still can’t put my thumb on it why we did not finish stronger.”

He’s discussing the end of the season here and really, it’s perfect. Holder later described Ford’s time at OSU as being “not quite right” and I think we all agree.

There’s just something…off…about him and him using the phrase “can’t put my thumb on it” when he meant “can’t put my finger on it” is as perfectly as he can sum it up.

“That’s three years in a row that we did that; that’s significant. I think in some ways the team overachieved early in the season, which raised a lot of expectations. And then the disappointing finish wasn’t the kind of note you want to go out on.”

This is true. What if the losing streak had come in January and then we’d ended the year on the high note that got Ford multiple “is he gonna usurp Bill as Big 12 COY?!” articles written about him?

On the other hand, Travis Ford ending years well is obviously why we’re all here to begin with.

“I’m aware of it. Most of that, or all of that, is directed toward the won-loss record. Maybe the average fan doesn’t see what I have an opportunity to see what I have behind the scenes. You have to temper that frustration and that disappointment with a bigger-picture outlook.”

Look, I get what he’s saying. We’ve gone over the financials before and I’m certain Holder gives a crap about graduating dudes and all that stuff folks pay lip service to.

I actually agree with this, too. I’m just not sure it’s the wisest thing to float unless he’s strictly talking about money (which he very well could be).

Also, both of these guys need to stop using phrases like “average fan” and “normal fan” — that doesn’t play well among the masses.

“I thought at the time, I was trying to lock in a good, young, up-and-coming coach that I thought was going to be successful. The length of the contract – I’ve talked to a lot of people since then, and the worst thing you can do is drag anything out too long, because no one can predict the future.”

“People have kind of held that against Travis, when the focus should be on me. All he did was sign the contract. I’m the one who offered it to him, so I should be the one in the crosshairs, and I accept that I am.

“Did I learn from that? Absolutely. I don’t have any intention of doing that again in the future because I just think it puts the university and whatever coach it is in a difficult situation. But the contract’s there, and you just deal with it.”

“The football and basketball season ticket holders may think when they occupy their seat then they are just supporting football or basketball.

“They are supporting all of our sports, baseball, wrestling, soccer, golf, and our DNA is really based on minor sports. We have 52 national championships and only two of them come from the major sports.”

That’s a really intriguing quote. I have to say, I’ve never thought about my fandom of OSU like that. He’s kind of right, though.

“The quandary is to figure out what is missing because he has so many of the qualities that I value and there is some component there that is not quite right. Hopefully, we can start again this year and come up with a better result.”

Is this not the definition of insanity?

Look, the bottom line — and we ALL know it, including Ford — is that if an eight-year contract had been on the table instead of 10, Ford would likely be gone. What do you think “but the contract’s there, and you just deal with it” means?

All of this hinges on the millions of dollars you’d have to throw at the problem to make it go away and how Holder is not going to do that.

If you read between the lines, that’s what all of this is about.