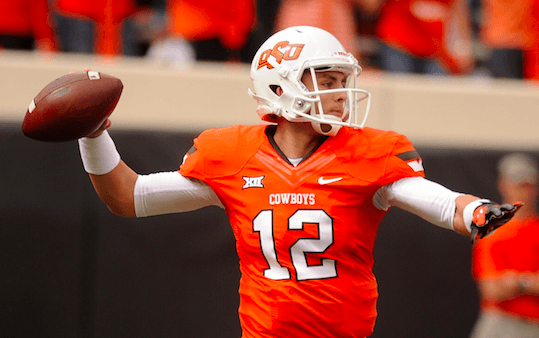 The backstory of Daxx Garman is winding and a little bit crazy. Why hasn’t he played football since before Brandon Weeden was the starter at Oklahoma State? Why has he seen the inside of so many locker rooms in the last five years?

There are answers in regards to his high school days in this investigative (and pretty creepy) YouTube video which was posted in 2010.

In it his dad[1. Who played minor league baseball and was a 1st round pick per Mike Sherman.] comes off as a little bit (okay, a lot) crazy with the whole thing culminating in him throwing a bag of ice at a cameraman.

This obviously has nothing to do with Daxx’s college career or even Daxx himself but I do wonder how all of this fits into what Gundy has in mind for the QB position.

It has to at least factor into the equation.[1. There was some confusion on this but I simply meant that coaches still have to deal with phone calls from dads, interactions with parents, etc. with college athletes. As Amilian said “if there’s anybody who would stubbornly not play the right guy just to spite one of his family members………..]