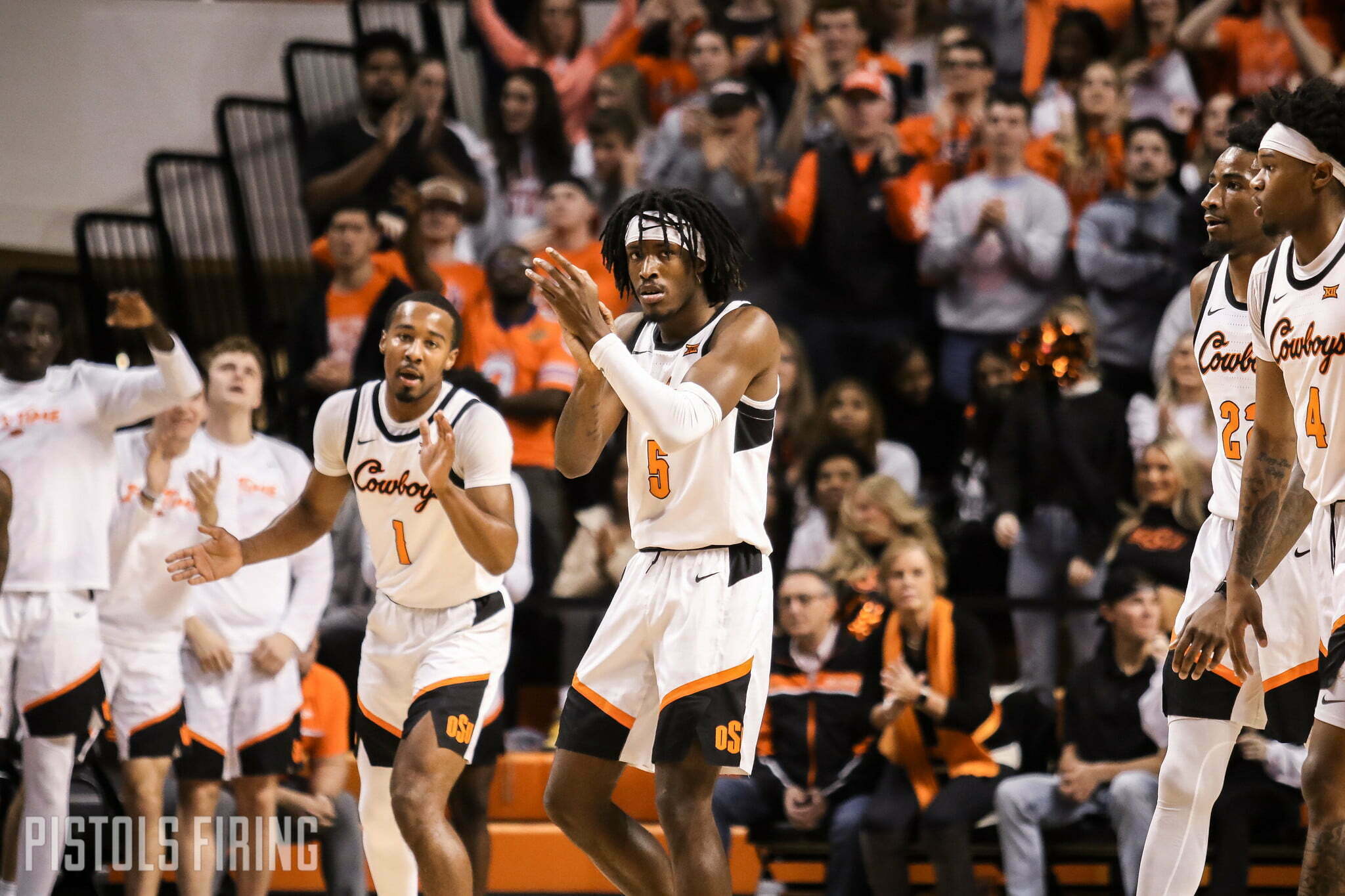 STILLWATER — The Cowboys’ needed a win Wednesday, and they got it.

Following its 72-56 victory against Bedlam rival Oklahoma, Oklahoma State hosts No. 12 Iowa State at 1 p.m. Saturday. Here are three things that stood out from the Cowboys’ Thursday media availability.

The Cowboys’ had 68 possessions against Oklahoma on Wednesday, the second-most they’ve had in a Big 12 game this season.

Playing with tempo has been a hallmark of Mike Boynton’s tenure thus far, often a result of the athletes Boynton tends to recruit. But this year has been a little different. OSU ranks 201st nationally in adjusted tempo, according to KenPom. That puts the Pokes eighth in the Big 12.

Boynton said it’s an amalgamation of things that have slowed his Cowboys down.

OSU started the Big 12 season with a game in Lawrence. Boynton said the goal is to limit possessions in the Phog, to slow down the Jayhawks’ high-powered attack. It also limits the number of times whistles can be blown.

From there, OSU got into a wrestling match with West Virginia — a game with seemingly zero flow. There were 46 fouls called, obviously slowing the game down. That game also saw Moussa Cisse suffer an ankle injury. Cisse’s absence forced the Cowboys to try to alter their style of play further.

OSU had 71 possessions against Kansas State, the most the Pokes have had in a Big 12 game, but that’s more indicative of the Wildcats, a team that ranks second in the league in adjusted tempo.

Finally trying to get out of the rut of slow play, the Cowboys scored 1.059 points per possession Wednesday, the first time they’ve been in the 1.0s since their win against West Virginia.

“There’s a lot of things that just happened sort of organically that you don’t really control that you just try to figure out as you go,” Boynton said. “But the thing that was clear is for us to have the best chance, we need more possessions in the open court. [Wednesday], it gave us a little glimpse of what it could look like.”

On two occasions Wednesday, Caleb Asberry pulled off plays that took a supreme level of confidence to even attempt.

The first came when OU coach Porter Moser was trying to slow OSU’s second-half scoring onslaught. Moser nearly ran to the half-court line hollering at his team to set up a zone defense. The Sooners got in there zone for all of a few seconds when Asberry pointed to the rim while looking at ball-handler Avery Anderson. Anderson heaved up and alley; Asberry threw down the oop. It came early in the shot clock before OSU had even attempted to run some sort of offense.

Then with about two minutes to play, Asberry threw an inbound pass off OU guard Grant Sherfield’s back. OSU had an 11-point lead at the time, and the Pokes ensuing possession resulted in Woody Newton’s dagger 3-pointer that essentially started the Sooners bus. Had that went awry, OU could’ve scored and pulled back to within single digits.

“I believe in myself,” Asberry said. “I feel like, one, I can jump pretty high, surprisingly. If you didn’t know it, I can jump. Then for two, I don’t know why I threw that off Sherfield’s back. It was mainly because he was talking mess, so I had to get back at him somehow. It’s just confidence, so yeah.”

In his first season at the high-major level, Asberry has been perhaps the most impactful piece off Boynton’s bench. Asberry averages 8.9 points a game while shooting 37% from 3, but on top of that, he makes game-altering plays like the ones he pulled off Wednesday.

“I try to let my players be who they are,” Boynton said. “I try to get to know them and be able to trust who they are as well as we can through the recruiting process. He plays with a chip on his shoulder. He believes he should’ve been at this level his whole career and wants to, in those games, in those environments, show that he’s as good as anybody else on the court. There’s a fine line. His aggressiveness at times has hurt us, whether it be not really focusing on executing our plays or fouling unnecessarily too far away from the basket, but there’s got to be a certain level of courage that you got to play this game with. And he certainly plays with a great deal of courage.”

As important as a home crowd is for a team, it might be even more important for Oklahoma State in regards to Kalib Boone.

Boone scored 15 points Wednesday against Oklahoma in front of the 10,789 in attendance. He also had a quintet of blocks and seven rebounds, finishing a game-best +30 in plus/minus, meaning Oklahoma State was 30 points better than OU when Boone was on the floor.

Boynton has spoke in the past on how sometimes Boone seems to need a spark to get him going. When he scored 10 second-half points against West Virginia, a tie-up that went to the floor seemed to be that spark. Against the Sooners, it seemed to be the crowd reacting to his three second-half dunks.

Now it’s a matter of whether GIA can continue to provide Boone, and the Cowboys, that spark.

“He’s a different animal,” Caleb Asberry said. “He feeds off of everyone in the gym. When he’s going, he might be the best big in the league, like scoring-wise.”