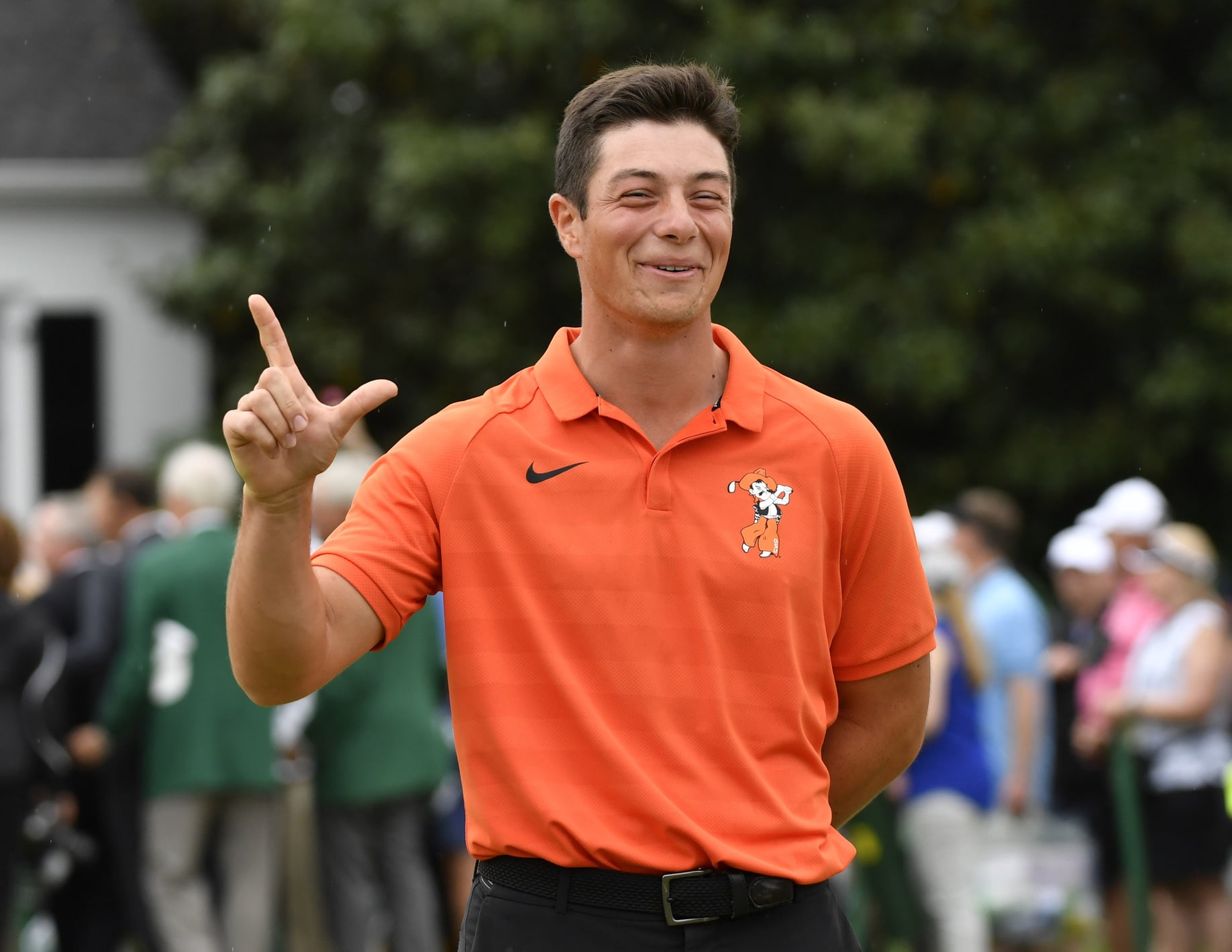 Swinging Pete, Wrestling Pete, even Detective Pete. Oklahoma State’s infamous mascot is as versatile as he is memorable, a fact that spread across Twitter earlier this week.

The original tweet was from The Ringer’s Rodger Sherman as he fawned over the Swinging Pete logo on Viktor Hovland’s polo from the Masters.

Kinda obsessed with this Pistol Pete Golfing logo
Just a rootin’-tootin’ mustachioed cowboy hitting the links in his massive hat. He’s got his guns in his holsters and if you try to enforce the dress code they might just come out pic.twitter.com/ozyTID5kaz

The Cowboy junior was the low amateur at golf’s first major of 2019 which meant he got a front-row seat as Tiger Woods was presented with his historic fifth green jacket. It also meant he got plenty of screen time on CBS Sunday afternoon, shortly after the most-viewed golf even over the last 12 months.

On Thursday, OSU’s head golf coach (and Hovland’s Masters caddy) Alan Bratton talked about that good pub that the university gained from Hovland’s play, as well as his wardrobe.

“It’s huge,” Bratton said. “I think they said there were 18 million people or something like that watching. To see the Swinging Pete logo there was huge, but more than that, to just see a product of our program, Viktor Hovland, represent himself with that much class and humility on a big stage like that. That’s huge Oklahoma State golf, but just for our university as a whole. It was a really proud moment for anyone that bleeds orange for sure.”

Shortly after the above-linked tweet from Sherman, SB Nation’s Bill Connelly who is, among other things, a statistical guru, Oklahoma native and actual friend of the pod, grabbed the reins.

They have Pistol Petes for every sport at the school bookstore. It is the greatest thing.

But that was only the beginning. What followed were threads of replies by national and local writers and fans (of OSU and otherwise) all tweeting pics, reactions and input on the debate of the multifaceted amulet of orange.

Here are some of the better ones I came across (many of these I had no idea existed).

sir if you want to play our course you’ll need to buy a collared shirt from our pro shop located inside the clubh—
(Pistol Pete draws his pistols)
sir my supervisor just told me we have actually decided to relax our dress code for today pic.twitter.com/AHDuYgSIby

he is twirling the ball with his hand on the toast… in case you want to try it!!🤣🤣🤣 pic.twitter.com/IxV4XqI7DS

And some alternate unis.

Oh man I would wear the HELL out of that.

Probably the best one pic.twitter.com/U2GlNUEhVw

Goin’ down to accounts receivable, if I ain’t come back in an hour count me get dead and call the IRS pic.twitter.com/AHN3zcqTIX

This one is just terrifying.