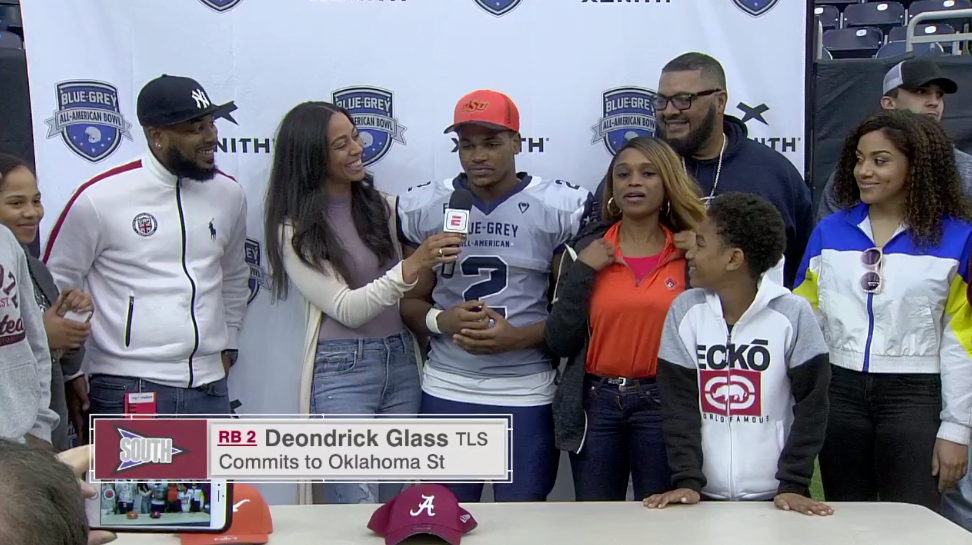 Nevermind the circumstances surrounding the recruitment of Deondrick Glass — that Alabama probably didn’t have a spot for him, that Texas didn’t make a full push to keep him in the state, that Miami landing a transfer may have pushed him elsewhere — his commitment to Oklahoma State on Monday was a big one.

When he put the OSU cap on during the Blue Grey All-American Bowl, it handed OSU a nice win on the recruiting trail that boosted its class ranking overall and simultaneously made him one of the highest-ranked running backs to ever commit to Oklahoma State.

It’s a big deal. And now, OSU can at least march full steam ahead to the upcoming signing day with confidence that its recruiting class, though still average in terms of overall ranking, is vastly improved from it was. OSU has, at times during the cycle, drifted closer towards the eight- and nine-spot than where it currently sits, at five, in the Big 12 hierarchy.

Here’s how the rankings within the conference look now.

Oklahoma State moved up one spot in the conference rankings, surpassing Iowa State to get to No. 5, and moved up five spots from 45 to 40 with Glass breaking news that he was OSU-bound on Monday. It gives the Pokes a puncher’s chance, from here, to potentially get to No. 4 in the conference and inside the top-40 if it maybe lands another, as many expect it will.

Here’s the national rankings embedded below (which will take you to the full page if you click anywhere on the link). The big note here is that OSU as a team has a class ranking at 195.65; ahead of it is Iowa at 196.57, Minnesota at 197.93, Baylor at 198.55, and so on. Even marginal improvement, such as landing one more commitment, could give them a final jolt to push them into the top four of the Big 12 and top 40 nationally.

The million dollar question here, of course, is will OSU land one more?

Colorado transfer Israel Antwine may count towards the 2019 scholarship count, but he’s not going to be factored into the team ranking (which doesn’t make sense considering junior college transfers do count, but, a rant for another day).

The most likely final piece remains out on the board in Soni Fonua, a defensive end at the junior college ranks. He’s set to visit in two weeks, and his commitment would likely push OSU into the 30s in the recruiting rankings.

Regardless, anything on top of Glass is gravy from here out. As Dustin Ragusa said on The Reload podcast Monday night, 2019 is the first class since 2014 — a class that had Mason Rudolph, Tyreek Hill and Devon Thomas — that has at least three four-star commitments.