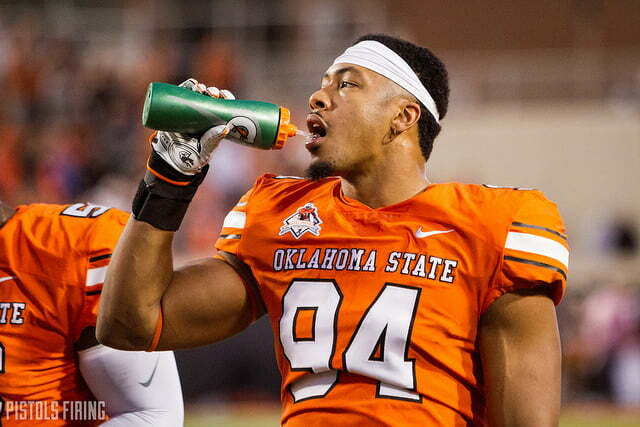 Oklahoma State’s leading rusher Justice Hill made himself some coin at the NFL Draft Combine last week, but its sack leader also improved his own draft stock with a solid showing in Indy.

Let’s recap his big weekend and the combine.

Brailford at least checked some boxes when it comes to his measurements. During the East-West Shrine Game practices, he weighed in at a slight 241 pounds, but he showed up in Indianapolis at 252.

If he can play at that weight it will bode will for him. Brailford’s still not the biggest or longest edge rusher out there, but he plays above his weight in the trenches.

Brailford showed out during the on-field drills and exercises. He did not take part in the 3-cone drill, the 20-yard shuttle or the 60-yard shuttle, but what he did participate in likely put him on several teams’ radars as a mid-round pass rusher.

It’s a bit curious that he didn’t take part in the agility drills, unless it was a decision based on his added weight. But he will have a chance to fill in any blanks at OSU’s pro day on March 12.

Brailford’s 40 time, even with the extra added weight, was ninth among edge rushers, a hair slower than another former Cowboy sack leader, Emmanuel Ogbah, who ran a 4.63 during his combine performance.

Brailford was the nation’s best pass rusher midway through his junior season, but those sack numbers took a nose dive as competition increased and as opposing playcallers tried to scheme around him. He’s also going to be hurt by coming out in what some draft evaluators are calling the best crop of D-linemen to come out in years.

But more than one NFL scout in attendance called Brailford the top defender at the East-West Shrine Game, where he met with the Cardinals, the Panthers, the Broncos, the Dolphins, the Giants, the Jets and the Eagles.

For those teams who were in intrigued by him in St. Petersburg, Brailford’s combine outing reinforced his case as a mid-round rusher and possibly even boosted his stock in an elite D-line class.