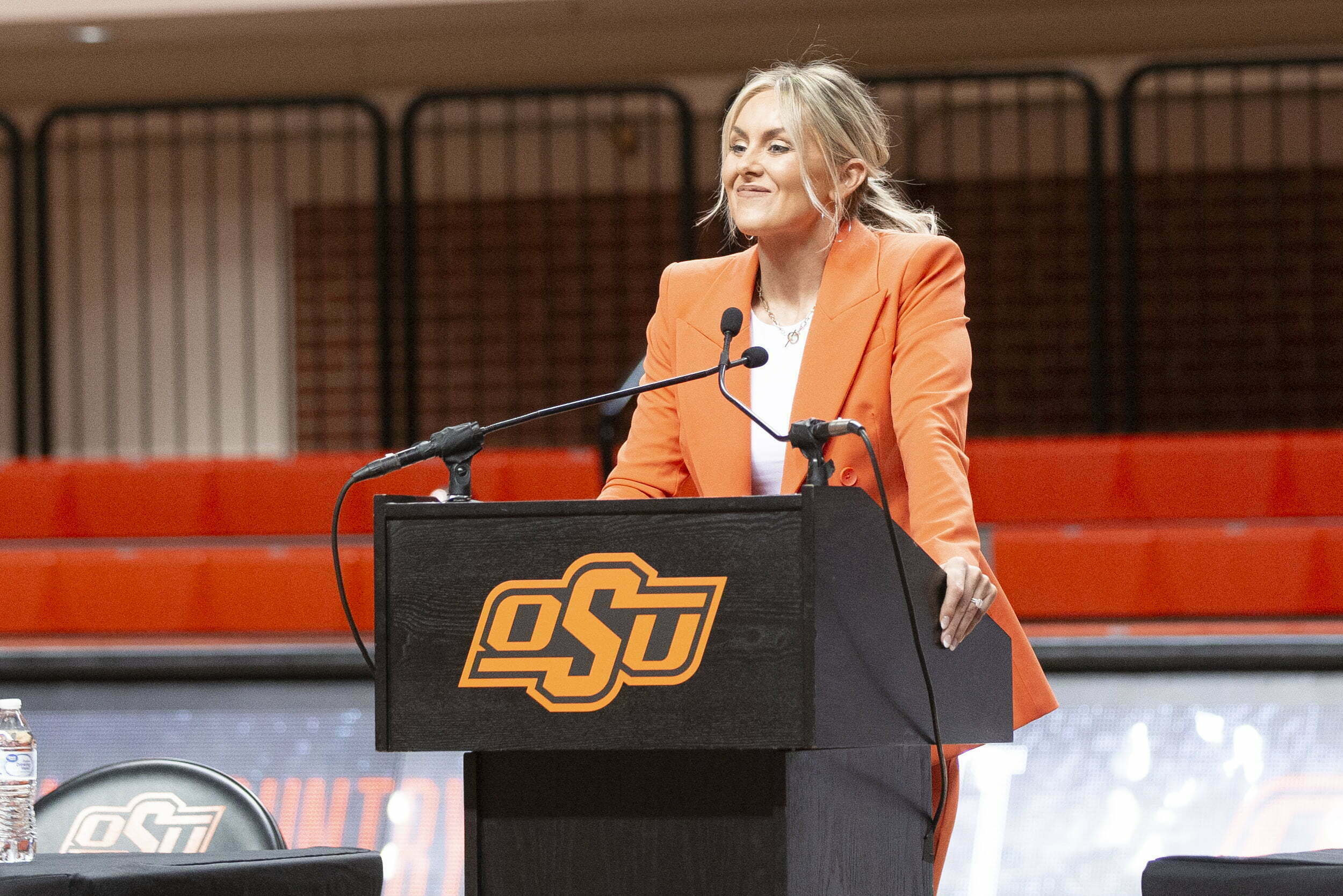 STILLWATER — As a young coach, Jacie Hoyt said she was often asked what her dream job was.

Hoyt, 34, was named Oklahoma State’s eighth women’s basketball head coach on Sunday after spending five seasons revitalizing the program at Kansas City. At her introductory news conference Monday, Hoyt said she tried to not get caught up in thinking about a “dream job.” She said her faith would write her story for her. That’s when Oklahoma State and athletic director Chad Weiberg reached out.

Oklahoma State started becoming more of a dream job for Hoyt when she met the people involved, she said.

She called that group a “dream team.” The team included Weiberg and OSU president Kayse Shrum. It wasn’t just that Shrum was a woman in a position of power, but that she also cared about and supported athletics.

Hoyt said her views on faith, family, relationships and winning aligned with that of Weiberg’s, too.

“We wanted to find a program builder,” Weiberg said while introducing Hoyt. “We were looking for someone whose personal integrity was very important to them and who would demonstrate that to our student athletes in the way they lived their life, lead our players and run our program. We were looking for someone with a great energy that would represent the best of Oklahoma State throughout women’s college basketball. We wanted a relentless recruiter with experience in identifying and attracting Big 12-caliber talent. We wanted a leader. We have found all of that and more in Jacie Hoyt.”

When Hoyt got the call from Weiberg about the job, she said she stepped outside as to not be distracted from the ongoing NCAA Tournament games she was watching with friends and family. While she was on the call, her sister’s dog got out and ran down the road. She had to chase the dog down before she told anyone.

But before Weiberg called her, one more person added to the dream team — Mike Boynton. Boynton, the men’s coach, called before Weiberg. True to his New York roots, Boynton compared himself to Mariano Rivera but when Boynton’s Yankees still had John Wettland. Boynton was the setup guy, not the closer.

Boynton and his entire staff were on-hand for the news conference. Boynton, who has a daughter, said OSU having a female head coach among its ranks is “awesome.”

“My thought is that Chad went and hired the person he thought was best,” Boynton said. “I certainly think it’s a positive thing that the young girls on the team have someone to look up to that has kind of walked in the same type of situations that they have. I think it can be a very positive experience for both sides, obviously the relatability. But there’s no doubt I’m all about female empowerment. I’m very vocal about that. This is not a man’s world. I’m telling you. I got four sisters. It’s never been a man’s world in my life. And obviously now being married, I understand the value that women bring to everything we do.”

Hoyt grew up in Kansas, so it would’ve been understandable if her dream job was KU or Kansas State or even Wichita State, where she played. But after going through the process and meeting the people OSU had to offer, her dream was in Stillwater.

“So, all of a sudden now I do have a dream job,” Hoyt said. “And I realize it’s right here at Oklahoma State and all those people that I talked about are a dream team, a dream team that I knew that I so badly wanted to be a part of.”