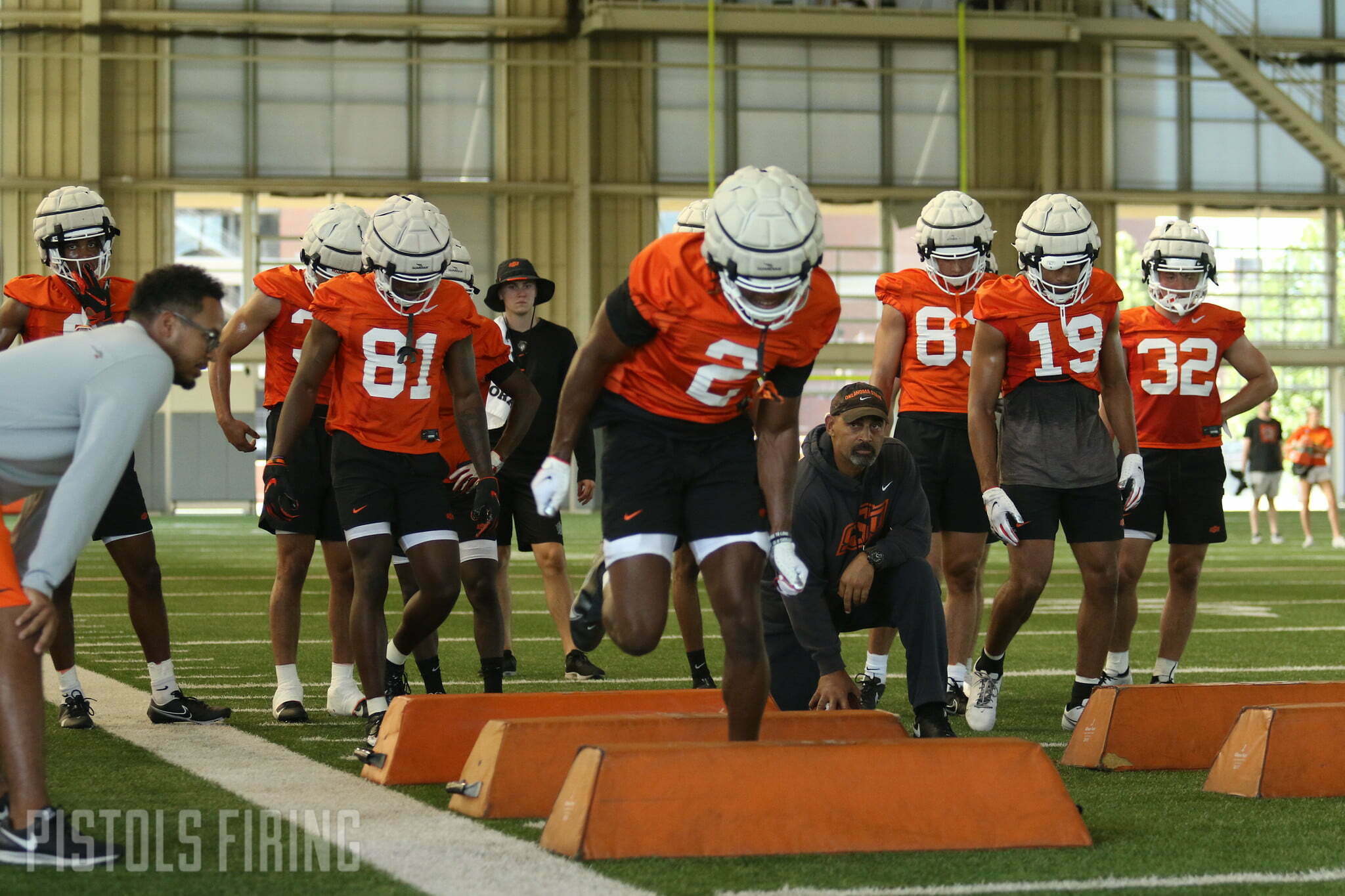 STILLWATER — Talyn Shettron is the highest-ranked receiver prospect the Cowboys have signed since Dez Bryant.

And the Cowboys have had some darn good receivers since then — guys like Justin Blackmon, James Washington and Tylan Wallace. Shettron was the No. 126 player in the 2022 recruiting class and after enrolling in Stillwater last spring, he is in the midst of his first fall camp as a college player.

Listed at 6-foot-2, 195 pounds, Shettron is in a position group with some returning firepower. OSU had a four-receiver recruiting class in 2021 that should be better in 2022 after getting thrown into the action early. But it’s hard to imagine a player of Shettron’s caliber won’t find his way onto the field this upcoming season. How would it look? Mike Gundy said this when referencing how much last season’s freshmen wideouts had to play.

“What I like to do is what we did with James Washington, where he comes in and plays eight, 10, 12 plays a game,” Gundy said. “And then we bring him along, and toward the end of his freshman year, we started playing him more, but he had gone through August, September, October. We started to get into November, and he started playing 25, 30, 40 plays a game, but we brought him to that level. We just didn’t throw him out there and put him in a difficult situation. That’s really a progression that I’m more comfortable with.”

So, let’s take a look at how OSU used Washington as a freshman. Wallace had a similar upbringing, so let’s look at how they did it with him, too.

Starting with Washington, here is how much he was used as a freshman (snap counts via Pro Football Focus):

Numbers-wise, it seems Gundy misremembered a bit on Washington’s freshman season (but a lot of that 2014 season was forgettable). Still, the point remains the same. At the beginning of the year, Washington wasn’t on the field for more than 55% of plays, but toward the end of the year, he was regularly out there for 80% of plays.

Then here is a look at Wallace:

Each circumstance is obviously unique. Washington probably got to play more because OSU was in a rebuilding mode in 2014. The team wasn’t good by OSU’s standards, going 7-6. So, it made sense for OSU to build for the future with a guy like Washington.

Then for Wallace, that 2017 team was contending for a Big 12 title, and Wallace was behind arguably the best wide receiver room in program history with Washington, Marcell Ateman, Chris Lacy, Tyron Johnson, Dillon Stoner and Jalen McCleskey. So, it’d make sense that Wallace wouldn’t play as much as Washington got to in 2014.

So, how can we take what we’ve learned from Washington and Wallace and apply it to Shettron? Well, the Cowboys are supposed to be good in 2022, a similar situation to 2017. However, I think it’s safe to say that the wide receiver room isn’t as strong as that 2017 one was (if it is, sheesh). So, Shettron would likely come out somewhere in the middle.

Between 115 snaps and 572 snaps seems like a cop-out answer. The middle of that comes to about 344 plays. If my math holds up (it rarely does), that feels like a pretty good sweet spot for the Cowboys’ highly touted pass catcher.