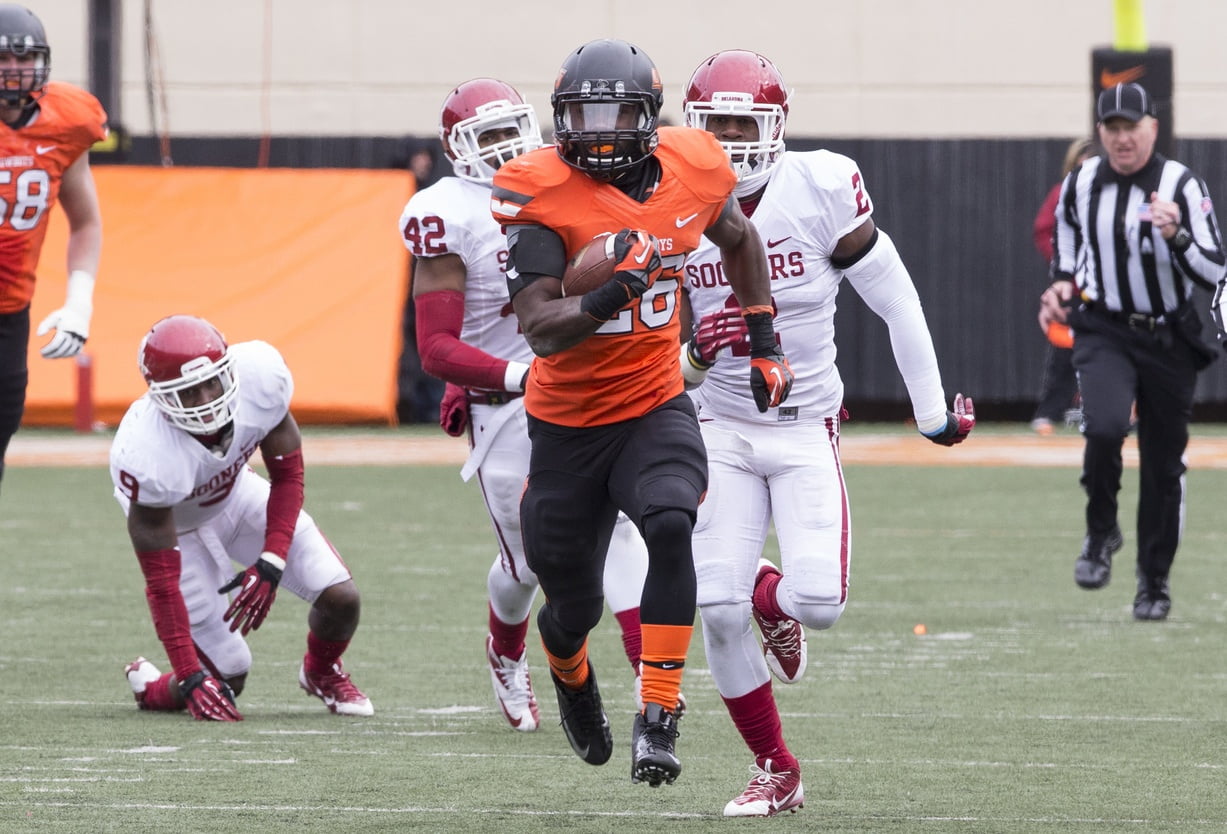 I wouldn’t mind seeing this this weekend. (USATSI)

I got together with Matt Hofeld of the excellent Crimson and Cream Machine earlier this week to talk Bedlam.

I had questions, he had answers. Here they are.

1. It’s been sort of a lost season for OU based on expectations — are most fans still locked into this game or have they moved on?

Fans are definitely still locked in. The season didn’t go as expected and so the last thing that Joe OU fan wants to hear is his OSU work buddy, neighbor, relative, or whoever bragging for the next twelve months about losing Bedlam on their home field.

Instead what he wants to be able to say is, “granted our season didn’t go as planned but at least we still made it to a bowl game.”

2. What is the formula for OSU to come away with the win on Saturday?

The “magic formula” for beating OU is pretty simple. Stop the run and force the Sooners to play from behind. When you look at the success against Oklahoma this season it has been when opponents shut down the run and forced the quarterbacks to make plays with their arms.

Trevor Knight has not been the guy we say in the Sugar Bowl and his replacement, Cody Thomas, has struggled even more so in the pass department.

With top receiver Sterling Shepard having a big question mark about his availability for Saturday you have to think that stopping the run puts OU is serious jeopardy.

I really don’t think you can nail it down to just one defensive player. I don’t see this as a game where just a single Sooners defender makes all the difference.

That said, I think in linebacker Eric Striker is having a big game, in terms of pressuring and sacking the quarterback, then it has been a good day for Oklahoma because it most likely means that the Cowboys have been forced to play behind the chains.

The OSU passing attack is going to be key here because Oklahoma’s secondary (particularly the safeties) has been brutal at times this year. So I would have to add at least the safeties to the conversation as well.

This game is past the days of just a single guy dominating from the defensive side of the ball. The Cowboys may be come stumbling into this game but it isn’t because they don’t have talent.

4. How scared are you of the “freshman QB on the road as a heavy underdog” parallels to 2001?

You had to bring 2001 up didn’t you? It’s just one game but I’m not sure that O-State doesn’t have a better freshman quarterback in 2014. The problem is they don’t have the All-American receiver and are nowhere near the caliber along the offensive line.

On the other side of the field the Sooners aren’t world beaters at quarterback either and have struggled at receiver as well. Oklahoma could easily see this game slip out of their control. I think the running backs for both sides are going to be keys to success. 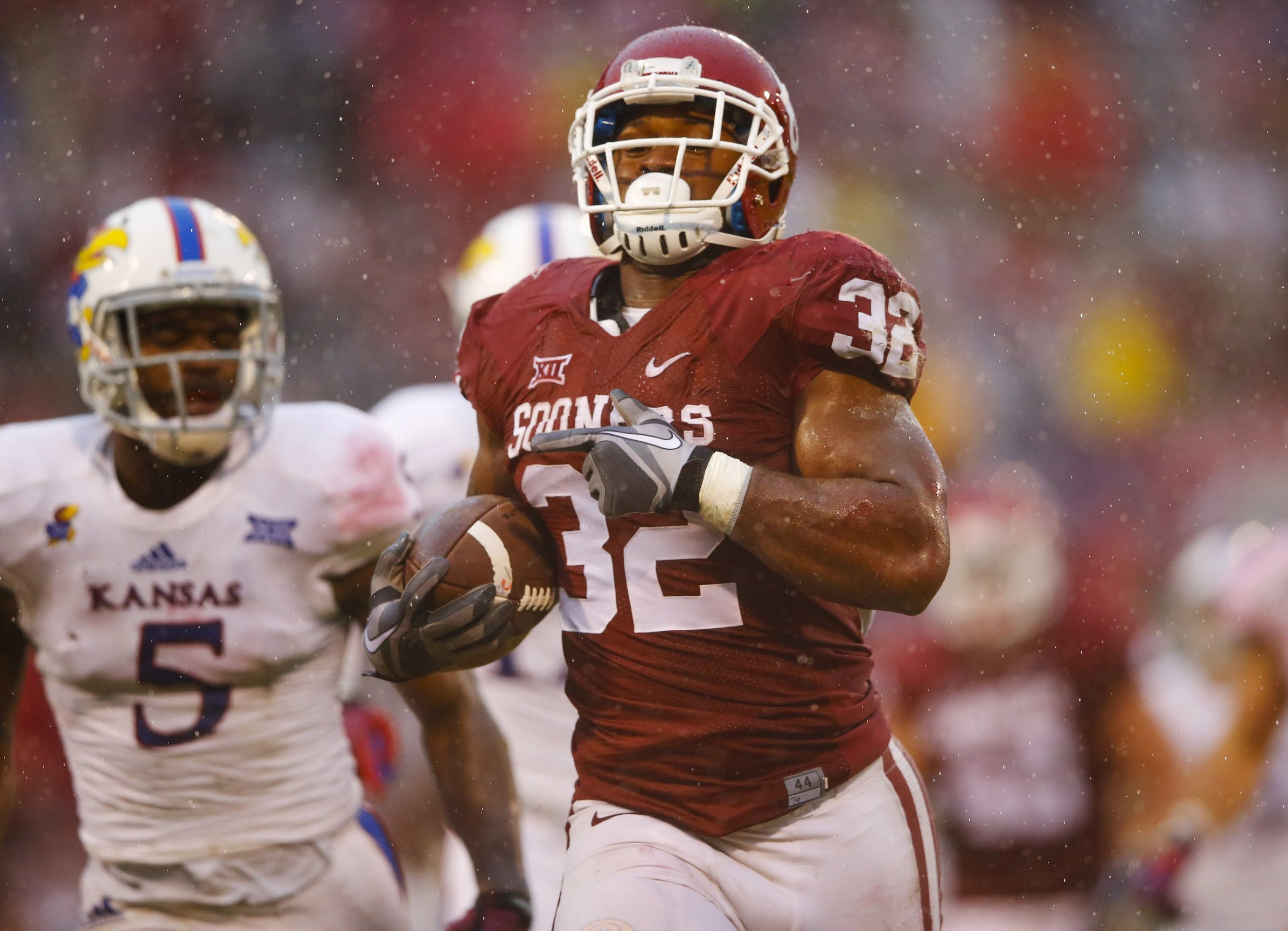 Samaje Perine is a beast. (USATSI)

5. Speaking of being scared — which OSU player scares you most in terms of controlling the game (#gamecontrol)?

I hinted at this a little bit above but I think that the team that has the greatest success on the ground is going to win the game.

For those reasons I have to look at a guy like Desmond Roland or Tyreek Hill. Both of them can find success on the ground and, Hill particularly, be a home run threat when they get to the edge.

6. What is Samaje Perine’s ceiling in Norman?

Samaje Perine is one of the fun stories this season. He started camp at No. 4 on the depth chart and most likely would have been a redshirt had Joe Mixon not had his incident back in July. Now it turns out that he may be the best running back in the Big 12 and yet he didn’t even start in his record-breaking performance against Kansas.

I don’t think there’s any other way to describe him but as a guy with a high ceiling. He’s tied Adrian Peterson’s freshman 200 yard game mark, broken his freshman touchdown record, and set the all-time NCAA single game rushing record all in a year where opposing defenses are focused on the run because of the struggles at quarterback and receiver.

Imaging what this kid can get away with if Oklahoma somehow gets the passing game working again.

7. Why might Cody Thomas be better than Trevor Knight?

Honestly I’m not sure that he is but if I had to start somewhere though it would be with his ability to run the ball. Knight is the faster and more athletic of the two but Thomas seems to have a better understanding of when to keep the ball.

It’s pretty crazy how much better the zone-read works when the quarterback doesn’t just hand it off every time. That’s been the biggest difference between the two quarterbacks to this point.

In terms of passing the ball though,I’m not sure that I’d trust either one of them to hit water if they fell out of a boat.

8. OSU fans (myself included) are pretty convinced Blake Bell has a Bedlam dagger permanently attached to his body. How do you see him applying it this season?

Blake Bell has set his Sooner Legacy on this game and there are so many possibilities heading into Saturday.

1) He’ll be the starting tight end and is a big target at 6-6/259 and is second on the team with four receiving touchdowns.

2) He hasn’t scored a rushing touchdown this season and I wouldn’t be surprised to see a healthy dose of the Belldozer.

3) With Trevor Knight ruled out Bell will also be the backup quarterback.

I’m with ya though. Bell has single-handedly been a thorn in O-State’s side and there’s no doubt that he will have a huge hand in the game plan. Me personally, I would expect to see him take more snaps at quarterback than any game this season.

9. Over/Under 5.5 more Bedlams for Bob Stoops including this one…?

That’s a great question! I still feel that Bob Stoops writes his own ticket in Norman and will leave only when he’s ready. I think I’ll take the over because it includes Saturday’s game but I just wouldn’t go more than six more.

That’ll be a 20-plus year tenure and you just don’t get that from very many coaches anymore these days.