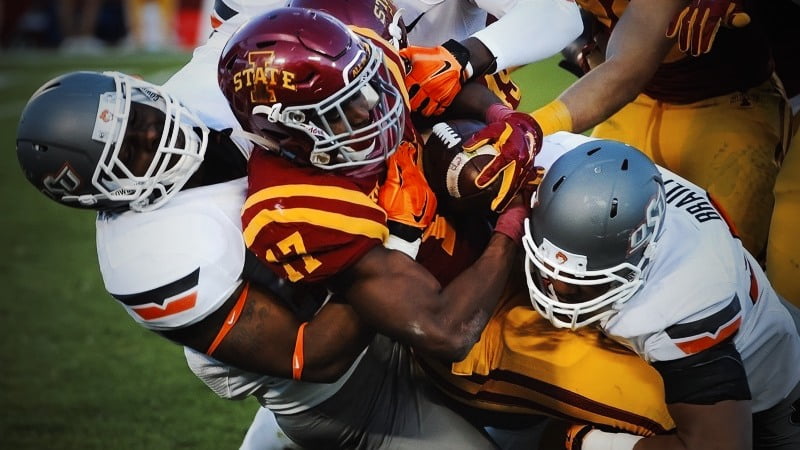 Surprisingly chameleon-ness isn’t one of the CFP committee’s myriad criteria for getting into the postseason final four. If it was, Oklahoma State would have to be thrown right to the top of the pile. Did you hear Mike Gundy on Saturday after the Iowa State game?

“I probably failed our team four years ago on doing the same thing over and over again, and we didn’t function well,” said Gundy. “We talked about that as a staff, that we would not be out-coached or out-schemed. We had some advantages in x’s and o’s this year, that we had not had.”

It’s as if not having as much NFL talent (like OSU did in 2011) has actually helped its coaches be better coaches and its team become a better overall team. That’s pretty fascinating.

And look at all the ways OSU has won games this year. Offensive explosions, defensive stands, turnovers and a couple of game-winning field goals that were very much in doubt. There is no lights-out formula like there was in 2011 when Brandon Weeden went for throats early and often that season. There haven’t been routs (other than the first half against TCU). There’s not a performance art aspect to this squad.

It just shows up on Saturdays, empties the tank and wins football games.

Ironically, this style is hurting it with the CFP committee. It isn’t dominant enough, apparently, for the schedule it has. It isn’t as flashy as the committee would like. It doesn’t play both sides of the ball like Iowa (LOL).

What it is doing, though, is no less impressive. Mike & Mike have schemed people’s pants off the second half of the year. Gundy with his Big Chief notepad and Yurcich with (presumably) his Legos. They are taking a bunch of two-star and three-star dudes and beating everybody they face. In a season marred across college football by one-loss and two-loss teams, there has to be something said for perfection.

“We think that’s what makes us a very strong team and strong offense is the fact that we are so versatile, we can do so many different things,” David Glidden told the Tulsa World on Saturday.

The reason we all keep saying “I’m STILL not sure if this is a great team” even after 10 wins this season and 12 straight overall is because it doesn’t have a distinct identity. And I mean that in a good way. Alabama, what are they? They’re going to run it down your throat and you aren’t going to run on them. Got it. Iowa? Ditto. Clemson, what are they? They’re going to be efficient on offense and let the defense overwhelm.

OSU, what are they?

I have no idea.

“Coach Yurcich and that staff have done a great job,” said Gundy on Monday. “I don’t know if ‘smoke and mirrors’ is a good wor,d but they’re doing a lot of different things to be able to accumulate yards in ways that are somewhat different than what we’ve had here in the past based on who we are as an offensive team right now.”

“You’ve got to keep it fresh, man,” added Yurcich. “These guys are eager for new schemes at times, but at the same time, you can easily stress them out if they’re trying to think. There is a lot to be said for putting out a game plan and making sure your guys are technically sound.”

It’s the same thing on the defensive side. New looks every week. It really proves how great of a season Yurcich and Glenn Spencer have been having.

On Saturday in Ames, OSU had drives of 6:16 and 7:15. The week before against TCU, its scoring drives lasted a total of 5:08. That’s what I mean about being a chameleon. That is just ludicrous. There aren’t a lot of teams in the country that can do that. OSU’s outlier characteristic (this ability to beat anybody in a number of different ways) is something that’s difficult to measure outside of the win/loss column.

Unfortunately for us, that might be the only place the committee isn’t looking these days.