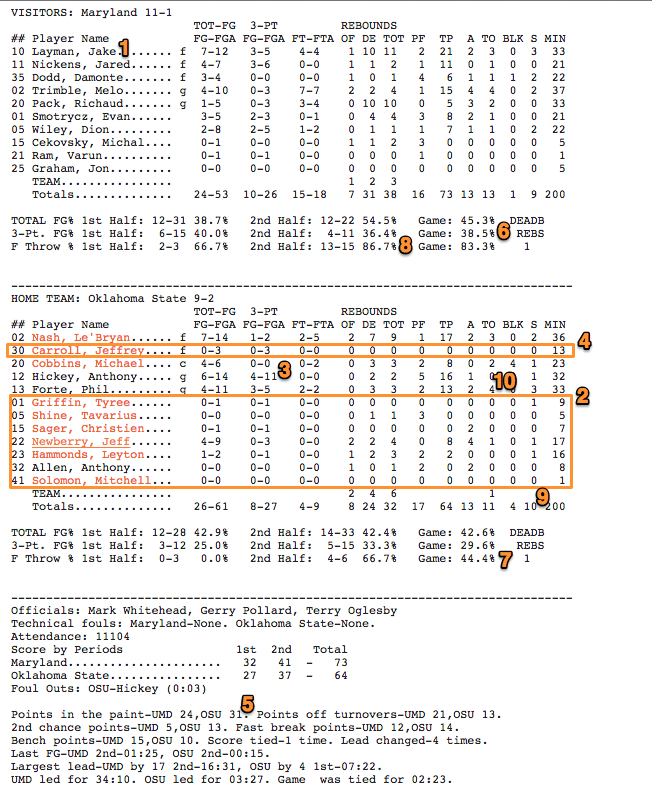 It’s been since last season that we did this but I thought OSU’s biggest game of 2014-15 (so far) would be a good time to bring it back.

1. We talked about it yesterday but Career High Guy gonna career high against Oklahoma State. Layman was a monster — I didn’t realize he led both sides in points and boards.

2. You can be deeper than the Indian Ocean but if this is what your bench does then what’s the point of touting depth as a strength?

3. That’s too many 3-pointers for Hickey. I realize a lot of them were in desperation time late but I don’t need him taking more than three a game. Probably fewer.

4. Literally the only thing Clip did was take three shots. That’s it.

5. Everybody (including me) says interior scoring is an issue but Nash sort of makes up for that, doesn’t he? I was surprised to see OSU scored more in the paint than Maryland. The real issue was at the 3-point line.

6. Sure felt like they shot the 3 better than this, didn’t it?

7. Yep. Here are the five worst performances since 2010 (all losses, not surprisingly).

8. Only 10 teams in the country have made more than 200 FTs, Maryland is second at 229. Oklahoma State has only made 187. Maryland shoots 74 percent which is pretty good but when you shoot that many it matters a lot less what your percentage is.

9. OSU is currently 9th in the country with 110 steals. Who saw that coming with Smart leaving?

10. Phil Forte has played 78 games, here are the number of games he’s had zero, one, two, three and four turnovers…

Related: Notes and thoughts on OSU-Maryland