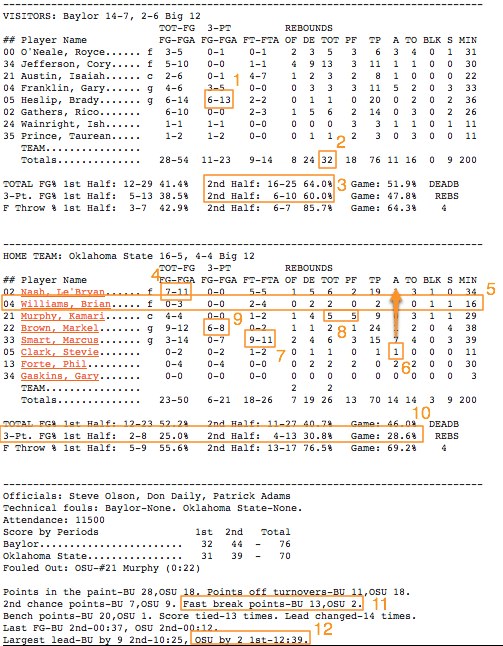 1. OSU guarded him like they didn’t know he’d been banging threes since the Carter administration. How many of these did he have a hand in his face for? Three? Four?

2. A team with two seven-footers should never get this few rebounds in a game. They almost got out-offensive rebounded!

3. I feel like this is the only way Baylor will win Big 12 games. Just catch NBA Jam-like fire in the second half and see what happens.

4. Get him the rock. I don’t know what’s so difficult about feeding a guy who’s 54% from the field on the season.

5. He affects games about as much as I do these days. And Ford’s not playing him — he’s only played more than 25 minutes once since the West Virginia game in Morgantown.

7. Marcus’ per 40 minute free throw attempts are actually up by more than two this year. That surprises me because it feels like he’s settling more for jumpers.

8. Remember when Kamari said he was ready for the big time? I don’t blame him because he’s a bit player on a conference title team and Ford is trying to ride him right now but don’t say that.

9. This brought him up to 37 percent from three in conference play. He was 42 percent last year. A lot of work left to do.

11. This is embarrassing, especially with the guards Baylor was rolling out there. And with Ish Wainright I mean literally rolling.

12. This is even more embarrassing. A 1-6 Baylor team WITHOUT ITS POINT GUARD and the biggest lead you get on them is two points?