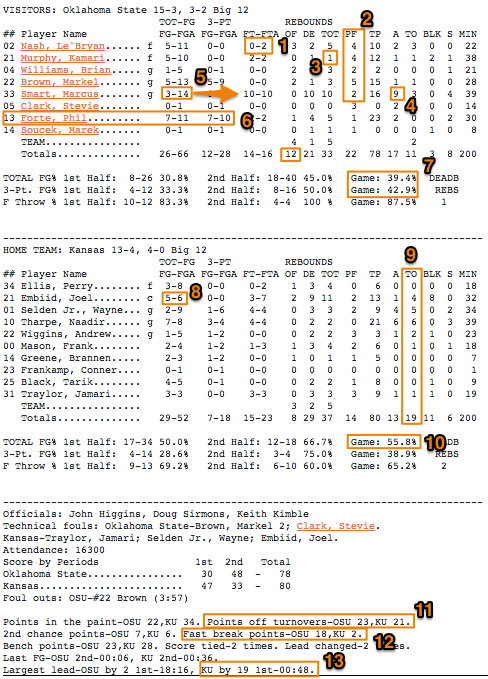 1. A lot of people have been commenting on this lately and I have to say I agree. Nash doesn’t go to the line enough in big games like this despite drawing a lot of contact. He’s been so solid this year and doesn’t get enough credit for it from refs.

2. What are we going to do if OSU goes to overtime or, gasp, double overtime this year?

4. Smart said on Saturday after the game that anyone who knows his game knows he’s a facilitator first. I don’t necessarily disagree with him, I guess, I’ve just never thought of him like that.

5. It’s amazing to me that the dude who went 3-14 can affect the rest of the game like he did. That’s why he’ll make millions.

6. He was so good. From Wichita, from Liberty, from Kansas City. From everywhere in the state of Kansas.

8. Embiid is so patient and yet so aggressive. He’ll have to get bigger but I was extremely impressed.

9. This is Kansas’ achilles heel. They freak out when they get pressured and I don’t know that Naadir Tharpe is the dude whose basket I want to put all my eggs in come March.

10. My gosh, how did OSU almost win this game again? That’s the worst (or best) shooting percentage OSU has given up to an opponent since Mizzou shot 59.3% in the 2012 Big 12 tournament.

11. I think OSU had two or four or some not-very-large number here at halftime. That second half was everything we’ve ever wanted this team to be in terms of pressure defense.

13. I said it in my 10 thoughts but it’s extremely impressive that an OSU team that trailed by 19 at one point in Allen Fieldhouse was a Le’Bryan three from swiping the Big 12 driver’s seat. I wonder what the biggest deficit ever overcome at AFH has been. I would think 19 would be pretty close to the record.