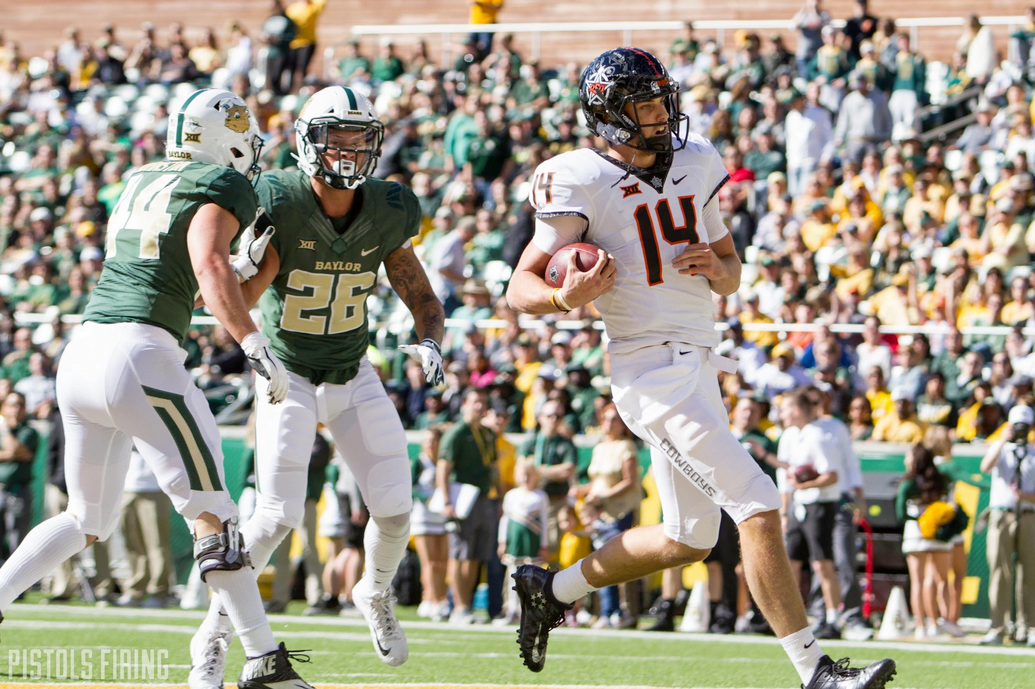 Oklahoma State came up with a huge win last week to potentially save its season. In taking down then-No. 6 Texas, the Pokes snatched up much-needed momentum and stopped the bleeding from a two-game losing skid.

The Pokes were back in action on Saturday a week from their trophy win against a middling Baylor, who entered the day 4-4, and they appeared to have a small case of the big-win-hangover-blues. Much like the two losses prior to Texas, OSU’s offense struggled to gain traction early, scoring only 10 points in the first half and 31 on the afternoon. They also made just one of their three field goal tries, thanks in no small part to gusty winds in Waco, leaving valuable points on the board that proved to be the dagger.

Though the Cowboys trailed going into the half (and made it easy to take a cat nap for most of the third), they finally got things going late in the third frame with some misdirection in the red zone to take a 17-10 lead.

#okstate back on top thanks to a #Corndog2Tylan connection in the red zone. pic.twitter.com/3GInEGuC7r

This scoring connection from Cornelius to Wallace was one of two in the third quarter for OSU. Minutes later, with only 25 seconds left before the fourth quarter, Wallace and Cornelius also connected on an 8-yard that found pay dirt.

Baylor did not go away, however, despite trailing 24-14 after those two scores. The Bears quickly responded by going 75 yards on a 1-yard drive 13 seconds later to make it 24-21 going into the fourth. When OSU scored with 8:55 remaining to go up 31-21, Baylor responded by upping the ante to inch it to 31-28.

The tipping point came late in the fourth quarter that may have swayed the outcome of the game. On a fourth-and-3 with less than 2 minutes remaining, OSU tried — and failed — to convert, giving Baylor excellent field position by taking a sack. Baylor happily took advantage of it by putting together a devastating drive that milked the clock and gave them the go-ahead in the final 10 seconds to go up 35-31. OSU’s final effort at a Hail Mary came up short.

Though the fourth-down fail in the fourth was an ill-advised sack taken from Cornelius — he probably should have gotten rid of it — he played well overall on the afternoon, hitting 23 of 40 passes for 264 yards and a score. He also had 12 rushes for 19 yards.

The running game on the whole was consistently a factor in the game for OSU. Justice Hill had 18 carries for 119 yards and a score, and Chuba Hubbard added 10 for 51. In the end, however, OSU’s mirage-of-a-defense picked a bad time to disappear on the final drive that lasted 1 minute and 24 seconds, culminating the 55-yard 8-play sequence with this.

The Cowboys are back in action next week against OU in Norman. Kick time and TV information is forthcoming.