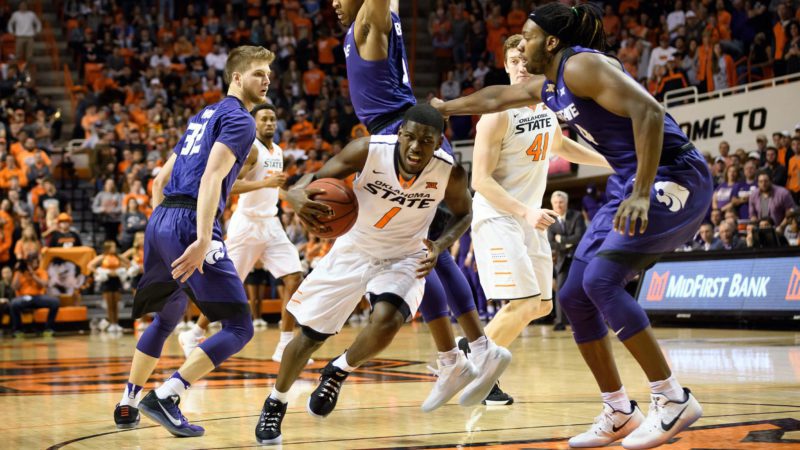 What started off as a track meet got downright ugly late for both teams. The Cowboys (10-7, 0-6) struggled on defense all night giving up 96 points to Kansas State (13-4, 2-3), a season high for the Wildcats.

It was an active crowd that started the 1,000th Cowboy basketball game played in Gallagher-Iba Arena. The Cowboys got out to a quick 13-8 lead thanks mostly to some hot shooting by senior wing Leyton Hammonds. He made his first three 3-pointers, the first two of which came on extra helpful bounces from the rim — and possibly the ghost of Bob Kurland.

Unfortunately, the Wildcats followed that with a 7-0 run, taking advantage of the Cowboys’ poor rotation and a 7-2 advantage to start in the rebounding department. Oklahoma State was able to go on their own 6-0 run by the halfway point of the first half taking a 28-24 lead.

Leyton Hammonds enjoyed a hot start with 11 points (4-6, 3-5 from 3) and three rebounds in 14 minutes in the first half. Unfortunately, Hammonds didn’t take a single shot in 14 second-half minutes.

The Pokes squandered away a narrow halftime lead early in the second half. The last time they led was with just under 16 minutes left.

Each team had five players in double digits, with Barry Brown leading the way for the Wildcats with 22 points (9-17, 4-7) including a Phil-Forte distanced dagger with the shot clock expiring to put Kansas State up 90-79 with 1:39 remaining.

Jawun Evans was aggressive early getting to the line five times in the first half as well as chipping in 14 points (4-7, 1-3 from 3), five assists and zero turnovers before the break. Evans finished with 20 points (7-17, 1-4) and seven assists to three turnovers, but didn’t make it to the stripe in the second half.

Jeffrey Carroll led the way in the scoring department with 24 (7-10, 4-4) and eight rebounds. He was the best player for the Cowboys all night. My 3-point confidence in Carroll has reached Dizzy non-con levels.

The Cowboys shot 64 percent from beyond the arc in the first half and finished 55 percent for the game. But they only shot 45 percent overall from the field.

OSU led for 13:14 of the first half but less than three minutes in the second. Kansas State won the turnover battle 12-19 and their bench outscored OSU’s 22-11.

OSU’s defense is not what we thought it was during the non-conference stretch. Kansas State had wide open layups pretty much whenever they wanted.

The Wildcats punished Oklahoma State’s defense on every late rotation. It’s become increasingly apparent that if OSU doesn’t turn teams over, they are going to have a hard time stopping anyone until they improve in help situations.

Underwood’s defense is predicated on overplaying the passing lanes to force turnovers, which does have a tendency to leave you exposed on the baseline but there is really no excuse for lazy rotations and missing your help assignment at the basket.

Davon Dillard provided a spark of the bench for the second-straight game. with four quick points included this…

Omg. Are you kidding me?! pic.twitter.com/6g3yPgxYha

Dillard has worked his way out of the Brad Underwood doghouse over the last few games and seems set on staying in the rotation with his effort. He’s going to have a few head-scratchers and there will be more but he adds value to this team.

The Wildcats took their largest lead up 84-77 with just over three minutes left but the Cowboys immediately answered with a Mitch Solomon tip in. The teams traded turnovers but Kansas State made the plays down the stretch and Oklahoma State just didn’t.

The Cowboys are 0-6 in conference play and now hold the lone last place spot in the Big 12 after Oklahoma’s win over No. 7 West Virginia in Morgantown. OSU travels to Lubbock to face Texas Tech on Saturday at 1 p.m.