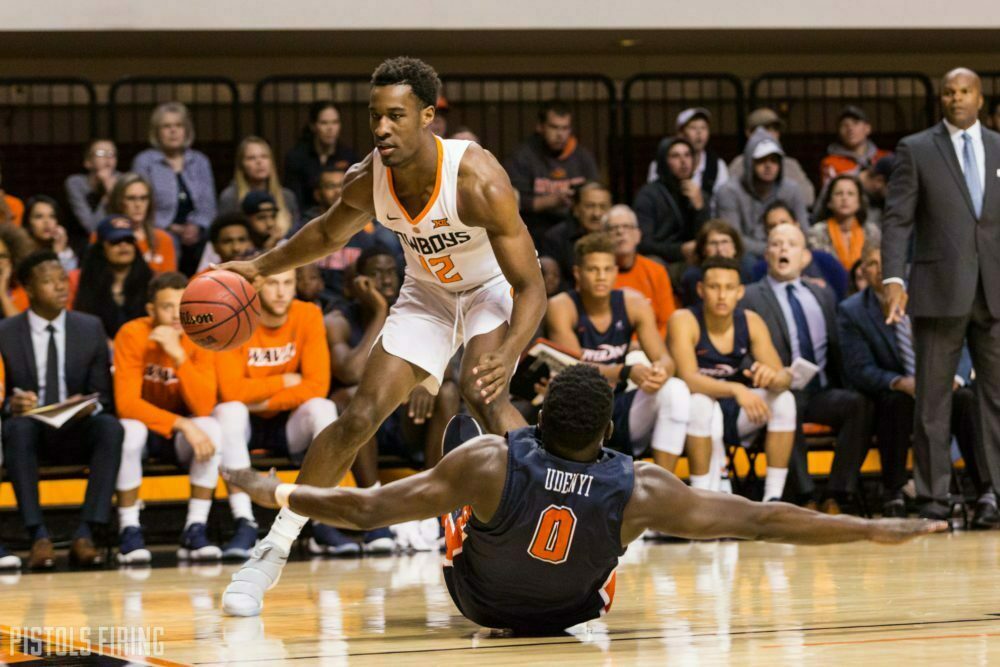 Oklahoma State won its 42nd-consecutive home opener on Friday evening inside Gallagher-Iba Arena over the Pepperdine Waves to give Mike Boynton a W in his first game as a college head coach.

“It means a lot to us … to not only play well for the school but also play well for him (Boynton) knowing all the circumstances that he has been put through,” said Mitchell Solomon. “It just means a lot for us to go out there and play as hard as we could, especially on the defensive end that he is so high on. To get a win like that really means a lot.”

The Cowboys got off to a bumpy start as they hit just 3 of 13 from 3-point range in the first half, but the defense was strong against a meek WCC opponent. The Pokes limited the Waves to just 30 percent shooting overall in the first 20 minutes and turned them over 12 times.

“We’re still a little tight,” Boynton said at halftime. “We’re down a few guys. I was really proud of our team for continuing to guard. Only 21 points in the half. If we do that throughout the year, we’ll be fine.”

The offense came in the second half. Or more specifically, the 3-balls came. The Cowboys seemed to run more of a half court look on offense — maybe because they were without Jeffrey Carroll, Davon Dillard and Zack Dawson. Carroll because of the investigation stemming from the FBI arresting Lamont Evans, and Dillard and Dawson because they broke team rules.

Regardless, OSU only had four fast-break points on Friday. But they hit 7 of 16 from 3-point range in the second half and easily pulled away from what might be the worst team in the West Coast Conference.

To their credit, despite playing almost exclusively out of half court sets, OSU still had 18 assists, mostly with ball movement like this in the second half.

Lindy Waters led all scorers with a career-high 14 points, while Thomas Dziagwa, Brandon Averette, Kendall Smith and Tavarius Shine all had double digits as well. Smith also had 8 assists, and Solomon tossed in 9 boards.

“We’re a couple guys short so someone had to pick up the slack,” said Waters after the game. “It wasn’t just me. It was the rest of the team defensively and offensively. Commitment to defense first, then that led to offense. It made the offense a lot easier.”

“I was very pleased with our effort,” said Boynton. “I’m very proud of our young men for the way they played. They’re dealing with a little adversity right now and we don’t have the most ideal circumstances to start the season, but you can’t tell those guys that.

“Those guys are committed to trying to play defense and sharing the basketball. Our offense took a while to get going, but our offense played well in the second half. One thing I stressed in the locker room is if they continue to commit to the defensive end, we’ve got enough shooters; we’ve got enough offensive players. The shots will fall, so we’ll continue to emphasize that.”

It wasn’t the prettiest college hoops I’ve ever seen, and the first half was particularly poor, but without your two best players, it wasn’t all that bad of a showing (especially defensively) on Friday in GIA.

The 1-0 Pokes pick back up with Charlotte on Monday night in GIA.