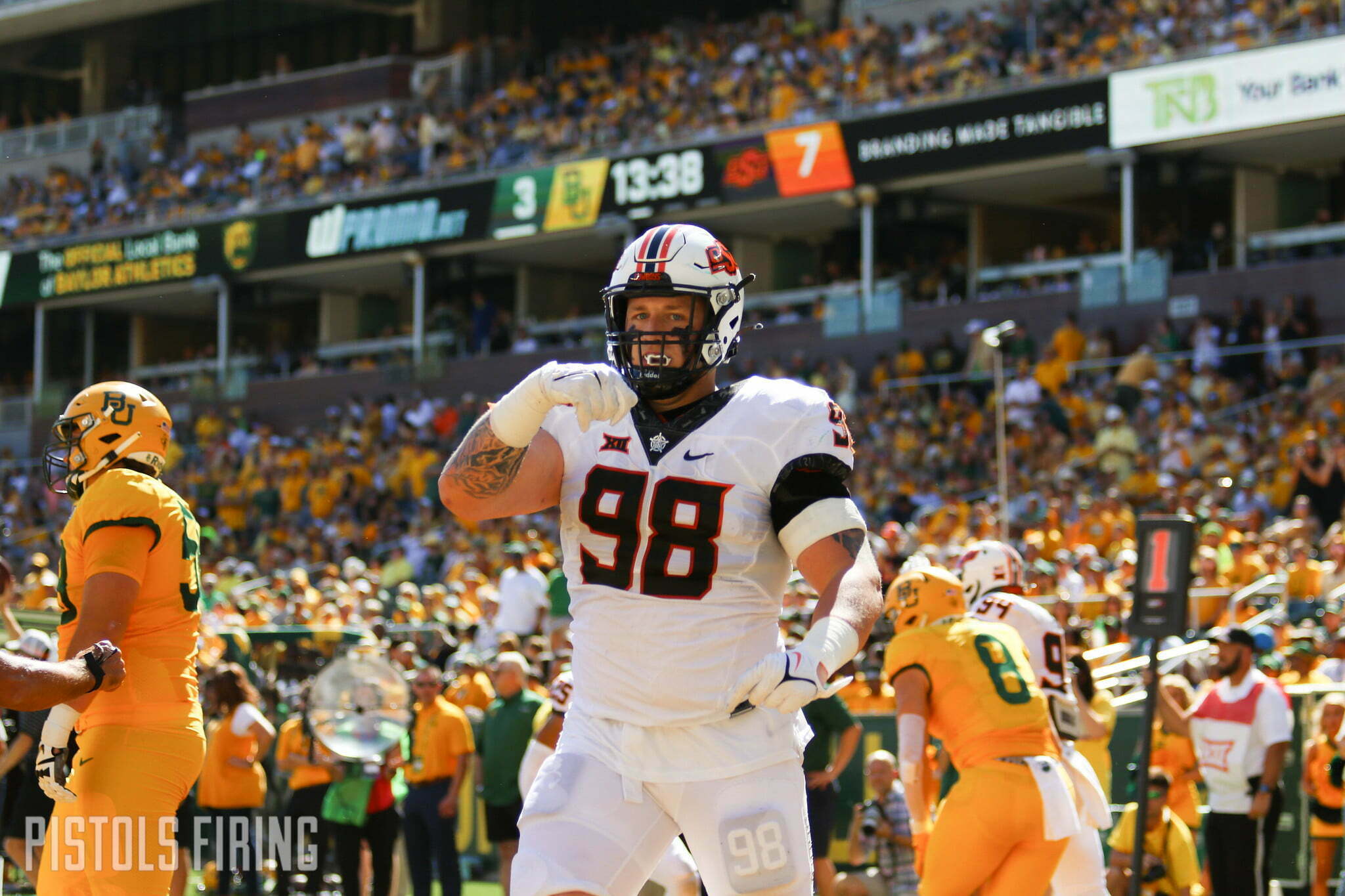 After what’s been a wacky start to the Big 12 season, Oklahoma State hopped into the driver’s seat for a return to Arlington.

No. 9 Oklahoma State defeated No. 16 Baylor in Waco 36-25, thanks to a dynamic performance by the Cowboy quarterback and some stout defense.

Spencer Sanders wasn’t perfect, but he was good enough to put his Baylor demons to bed and tie his head coach with 28 career wins as the Pokes’ starting QB. He’s now four games behind the Cowboys’ all-time winningest QB, Mason Rudolph.

Sanders went 20-for-29 for 181 yards, a touchdown and an interception, but he made his fair share of plays through the air. He also led the Cowboys with 75 rushing yards and a score on 14 attempts.

Dominic Richardson had 24 tough carries against Baylor’s vaunted defensive front for 73 yards and a score. This may not go down as his best game of the year, but he earned every one of those yards and helped the Cowboys sustain drives when needed.

Brennan Presley hauled in eight of 10 targets for 86 yards. Bryson Green had 40 yards and a touchdown on just two grabs. John Paul Richardson caught four passes for just nine net yards, but he had one of the plays of the game when the south paw found Green on the sideline for 32 yards.

The Bears (3-2) struck first kicking a field goal after Baylor receiver Gavin Holmes dropped a third-down pass at OSU’s 5-yard line. Later in the first, Holmes had another drop on the sideline to negate a big play. The Cowboys (4-0) topped the Bears with a Bryson Green highpoint touchdown in the end zone.

The Cowboys took a special teams play out of their Central Michigan playbook. Tom Hutton and Brennan Presley combined to plant the Bears at their own 1-yard line and then OSU’s defense forced a safety on the next play.

The Cowboys took a 16-3 lead into halftime, holding the Bears to their lowest first-half in Waco since the Cowboys’ 2019 win.

After both teams combined for 19 points in the first two quarters, there were five touchdowns scored in the explosive third quarter.

The fireworks started when Jaden Nixon caught the opening kickoff of the second half at the 1-yard line, and didn’t stop running until he scored.

But that was just the start. Baylor scored back-to-back touchdowns to pull with 23-17, including on a 49-yard pass and catch. But the Cowboys answered with a touchdown and then did enough to keep the Bears at bay through the next quarter and a half.

Sanders threw his second interception of the season when a Baylor defender jumped an out route by Brennan Presley. But No. 3 wasn’t shaken. On his very next snap, Sanders went deep to Braydon Johnson for a 49-yard throw-and-catch to set up OSU for a first-and-goal from the 1. Dominic Richardson scored on the next play.

Dave Aranda likes to live dangerously and it mostly worked for him.

After starting 0-for-2 on fourth down, Aranda elected to go for it on fourth at his own 30-yard line and then again at his 14. Those plays resulted in a 70-yard touchdown and a first down, respectively. Meanwhile, Mike Gundy chose to kick field goals twice inside the 10-yard line with a lead. This time conventional wisdom paid off.

While we spent a lot of energy talking about Spencer Sanders’ seven interceptions against Baylor last season, it was Blake Shapen’s two picks that sealed the Bears’ fate on Saturday.

Thomas Harper’s second career interception was collected off the hands of Gavin Holmes. Harper’s return gave the Cowboys the ball at the Baylor 33 with just under nine minutes left. OSU paid that off with three points. Then Jason Taylor II showed off his patented to nose for the ball by jumping a route and securing a game-sealing one-handed interception with 2:55 to go.

The Cowboys’ defense gave up some big plays but mostly curtailed a dynamic Baylor offense. The turnovers were huge but OSU also held Baylor to 3-of-11 on third downs. The Cowboys came into Saturday leading the Big 12 allowing conversion on just 23 percent of opponents’ third downs.

Next up, the Cowboys return to Stillwater to face Texas Tech next Saturday at 2:30 p.m.