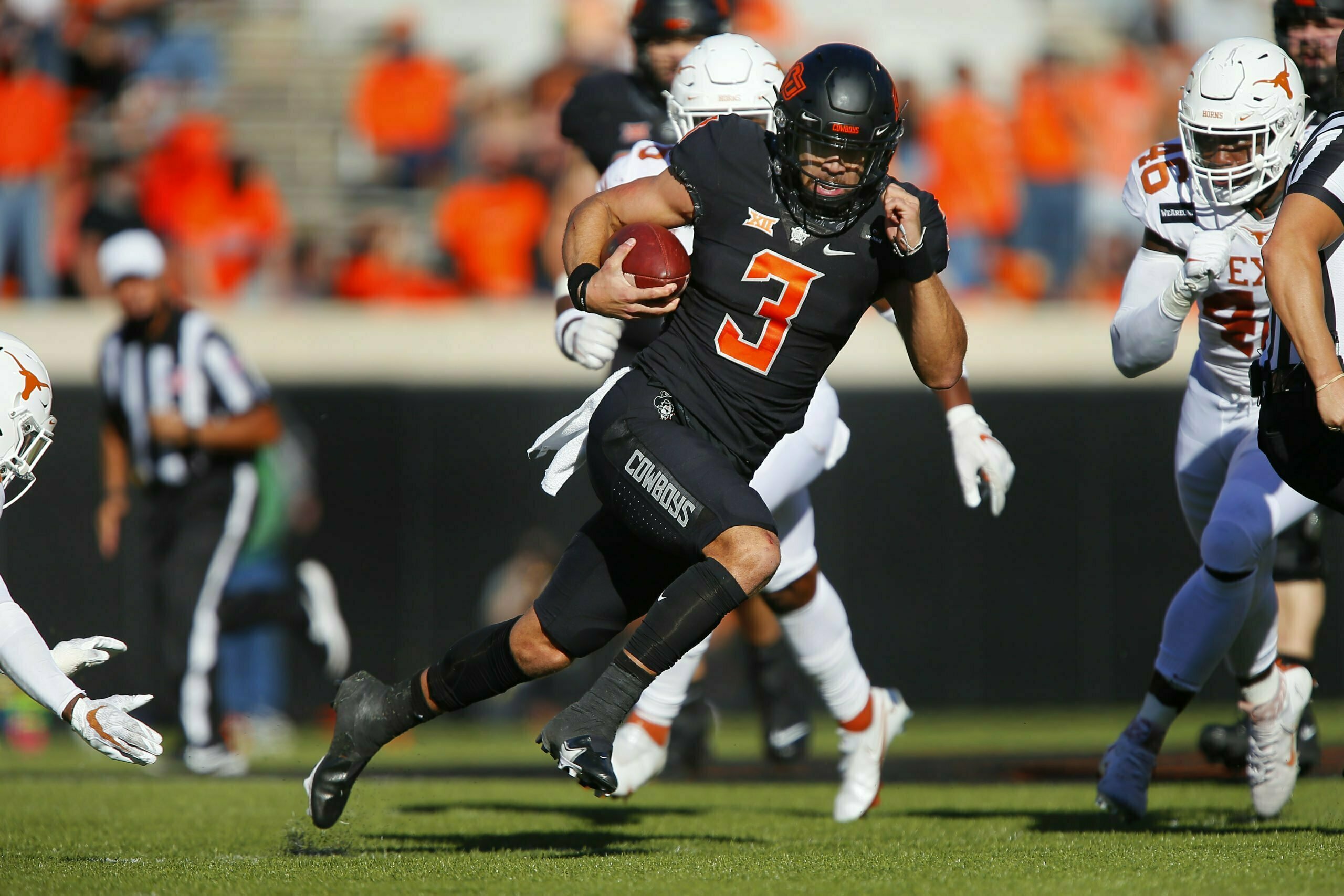 Oklahoma State fell to Texas 41-34 in overtime despite nearly doubling the Longhorns in total yards gained and losing the turnover battle 4-zip.

Both teams scored early and often. Oklahoma State, thanks to its skill talent, and Texas, thanks to Oklahoma State. A fumbled handoff between Spencer Sanders and Chuba Hubbard that gave UT the ball at the OSU 15-yard line early and set up a TD to tie it up at 7.

It was a mixed bag from Spencer Sanders in the first. He went 14-of-20 for 232 yards and three TDs. But he turned it over three times with all three planting Texas inside the red zone. OSU’s defense was able to hold the ‘Horns to 3 on two of those.

Oklahoma State took a 4-point lead into halftime but it felt like it should have been up by three scores. But after combining for 44 points in the first two quarters, both teams combined for just 13 in the third. Neither scored in the fourth quarter until Texas took at 34-31 lead with 4:27 to play.

That scoring drive that shouldn’t have been was kept alive when an OSU roughing the punter penalty turned a fourth-and-22 into a first down for UT. OSU’s defense still held strong but Texas was able to convert on two fourth downs.

On the ensuing OSU drive, a would-be first down-converting catch by Dillon Stoner was overturned to an incomplete pass after review. Facing fourth-and-5 on its own 30, OSU chose to punt with just under four minutes remaining.

OSU’s defense allowed just its second third down conversion of the game when Sam Ehlinger cut loose for a nine yards forcing OSU to take its final timeout. But OSU was able to hold the Longhorns thanks to a Devin Harper sack.

With a minute and 13 seconds Spencer Sanders was given the rock with no timeouts, down by 3. He carved up the Texas defense, going 4-for-4 for 62 yards to get into field goal range allowing ice-cold Alex Hale to tie it at 34-all from 34 yards away with five seconds left.

The Cowboys won the toss and Tylan Wallace said the name of the unit that got them there, defense.

Short Kolby Harvell-Peel and Tre Sterling with injury, it was up to OSU’s defense. A head-scratching pass interference call on Thomas Harper extended Texas’ drive that allowed Ehlinger to find receiver Joshua Moore for his first catch on the day, a 15-yard touchdown to put Texas up 41-34.

The drama was never ending in this one. OSU’s would-be tying touchdown was waved off due to two ineligible Cowboys downfield. A few plays later it came down to fourth-and-8. Sanders had nowhere to go and was sacked for the loss.

Sanders finished with a career-high 400 yards and four touchdowns, completing 27 of 39 passes but was credited with three turnovers, one by air, two on the ground.

Texas set out to bottle up Chuba Hubbard and was mostly successful. Hubbard turned in a career-low 2.9 yards per carry and a season-low 72 yards. Chuba did rack up 34 yards and a score through the air.

But that philosophy left Longhorn DBs on lonely islands all afternoon resulting in quite a huge game from Tylan Wallace (x for x). Texas cover men could do little more than grab and pull as OSU receivers ran wild and open by them.

Tylan Wallace was a dude all day, grabbing 11 catches for a season-high 187 yards and two scores.

Ultimately, four turnovers by Oklahoma State’s offense and that roughing the kicker penalty were too much to overcome. OSU tastes defeat for the first time and moves to 4-1 (3-1 in conference). The Cowboys head to Manhattan to take on Kansas State next Saturday.