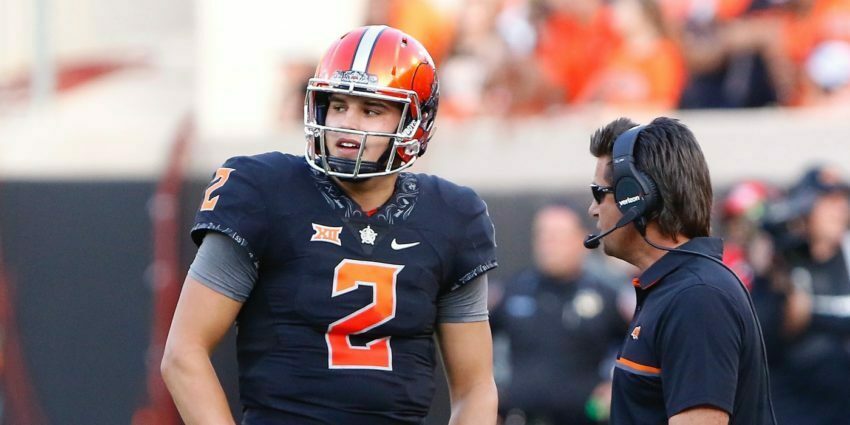 Mason Rudolph is in the midst of his best season at OSU – just ask Kyle. Now that we are halfway through the season, I thought it would be a good time to take a look at how Rudolph’s season stacks up to his peers in the Big 12. To take it up a notch, I compared his season to all Big 12 quarterback seasons since 2008 with 20+ pass attempts per game — a population size of 82 seasons.

Here’s how Rudolph’s numbers look relative to the group of 82 in each of the four statistical categories that make up the QB Rating stat. I included the best, worst, and median for each category along with Rudolph’s statistical neighbors.

This is one of Rudolph’s better categories. His average this year is 8.8 yards per attempt, which is 3rd in the conference and good for 14th overall in this group of 82. He is just behind his 8.9 mark from last year. Throwing deep is en vogue in the Big 12 this year: 5 of the top 18 yards/attempt seasons in this group of 82 are from 2016 (Mayfield, Mahomes, Rudolph, Russell, Howard). Now for one of his not-so-good categories. Rudolph is completing 61.9% of his passes, which is basically average in this group of 82. He was at 62.3% last year, so I would venture to say this is who Rudolph is — he will probably never be a super-accurate QB. Forget the numbers — we’ve all seen him miss those short-to-intermediate throws that probably make Yurcich throw his Legos against the glass upstairs. Here are the figures: “But Dave,” I can hear you saying, “throwing the ball downfield a bunch is the cause of his lower completion percentage. Those longer throws are less likely to be completed and bring his percentage down.” I’m glad you raised this point. Let’s examine that. There is a relationship there – not an incredibly strong relationship, but a relationship. The higher a QB’s yards/attempt, the higher his completion percentage. Why? My guess is the simple reason – those QBs are better. They make better throws.

Based on this relationship alone – ignoring other factors – given Rudolph’s 8.8 yards/attempt figure, he should be completing passes at a 66% rate, which would put him in the top 25 of this group of 82.

This is a category Rudolph has improved in significantly compared to last year, when Walsh cannibalized several Rudolph TD opportunities – he was way down at 5.0% last year, which is 52nd out of 82. He’s still not killing it in 2016 at 36th, but he’s better than average. Please take a moment to appreciate Sam Bradford’s ridiculous 10.4% number in his 2008 Heisman season. As a reference, Weeden’s 2011 figure was 6.6%. QB Rating: Putting It All Together

Mason comes out looking pretty good but not elite (sorry Kyle) in QB rating. I’m dubious about how much this should be relied on to define a QB. It’s an imperfect metric to be sure, but still – look at the top 5: RG3, Bradford, Petty, Mayfield, McCoy. It’s an exclusive list that Rudolph has not made himself a part of – yet. If he was completing 70% of his passes (that would be another 18 passes this year or 3 per game), he would have a top 10 QB rating among this group of 82. It’s those frustrating passes he’s missing that separates him from the elite group of QBs we’ve seen in the Big 12.