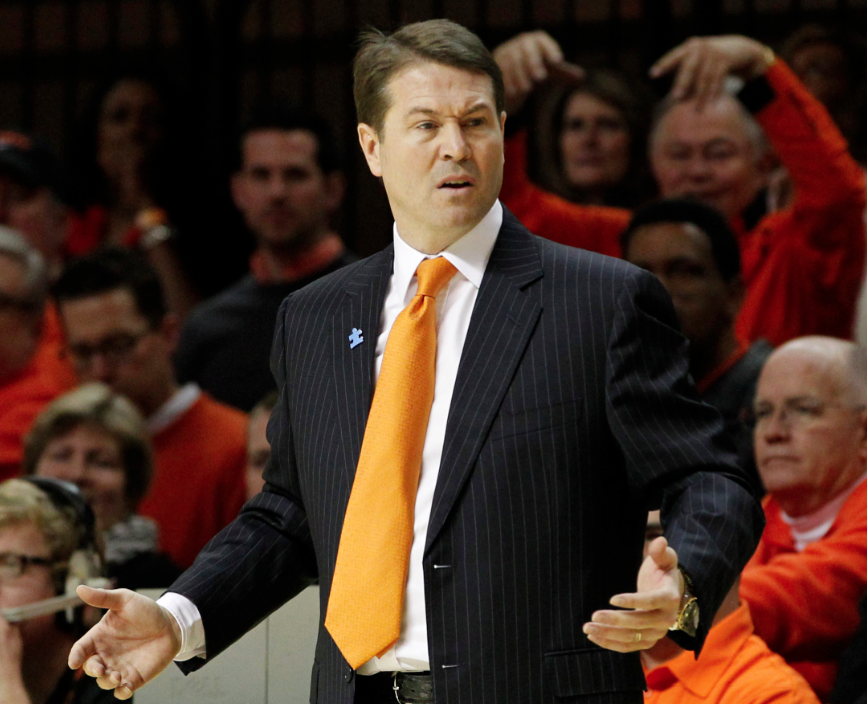 Travis Ford is a master recruiter, I’m told. He can’t coach a lick (except out of timeouts) and he can’t develop (we kind of debunked that a little bit here), but the man can recruit. That’s the profile, right?

He convinced Marcus Smart to come to Stillwater and his is the back on which Ford’s last two teams have been built. He got Le’Bryan Nash and Markel Brown and Mike Cobbins and…

OK…here are all the players Travis Ford has gotten committed to OSU and what has become of all of them (I used Rivals):

Reger Dowell — Lasted two and half years, transferred to UT-Arlington where he averages 21 a game.

Fred Gulley — Lasted two and half years, transferred to Arkansas where he averages 5-2-2-1-0 a game.

Karron Johnson — Never qualified, went on to become a D2 star. Got buckets for the Wiz.

Jarred Shaw — Lasted two years, transferred to Utah State where he averages 15 and eight a game.

Torin Walker — Lasted one year, transferred to Middle Tennessee where he averages one and one.

My gosh. That’s all of them. Nobody completed three years, much less all four!

Markel Brown — Ford’s only player (so far) to play all four seasons (I expect Forte and maybe Nash and Murphy to join him).

JPO — Had already played a season when he came to Stillwater. Averaged 11-4-1 for his career. Redshirted his sophomore season.

Cezar Guerrero — The Mexican Assassian. I sort of miss him. Transferred to Fresno where he’s averaging 14-3-4-2-0. Wow.

Leyton Hammonds — Has lost his confidence (according to Fran).

Gary Gaskins — Not redshirting (I guess?) but probably should be.

So of a possible 59 player seasons of guys Ford has recruited he’s gotten 42 out of them. That’s actually not as bad as I thought it would be.

He has gotten commitments from 23 guys (I’m not counting Johnson) and 10 of them have transferred, or 43 percent. The national average is more like 34 percent, according to this study.

The transfer thing doesn’t bother me as much because I feel like it has stabilized. That 2009 class was an abomination and seems like an outlier. The more troubling thing is that he actually hasn’t recruited that many good college basketball players.

Look at the numbers.

Is Cobbins good? He averages 6-6-1-1-2 for his career. Fred Jonzen averaged 10-6-1-1-0 in his time at OSU. I mean, my gosh, Andre Williams averaged 5-6-1-1-2 a game for his career. Andre was a fine bit player but he wasn’t exactly Greg Monroe down low. Cobbins and Andre Williams are basically the exact same person. And Cobbins is probably the fifth-best player on Ford’s resume.

Smart? Fine. Markel and Nash have been awesome and Forte might be the fourth best guy Ford has recruited. But four good guys in five years?

That’s not going to get it done. And is also why Markel is playing 39 and 54-minute games.

You can point at injuries, you can point at academics, you can even point at people peeing out the windows of cars. But Ford is responsible for recruiting a deep, talented team and despite what everyone keeps telling me, he hasn’t done that yet.