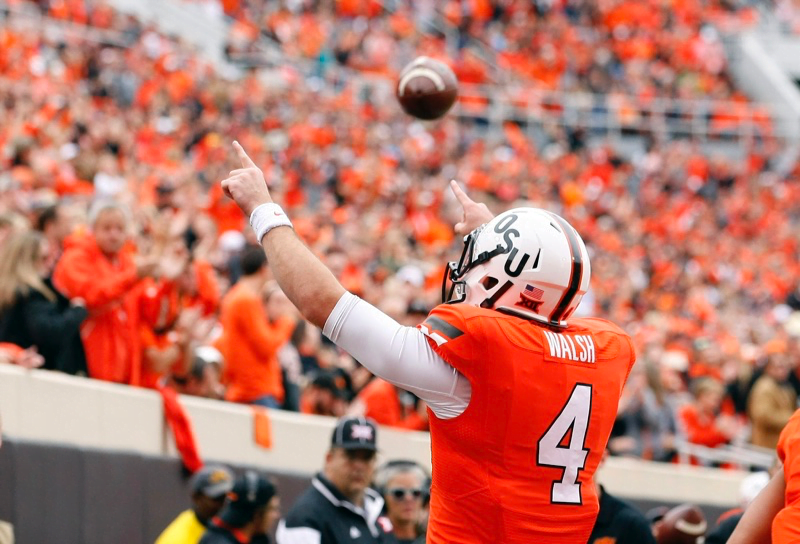 An hour-long phone call to former Oklahoma State quarterback J.W. Walsh ended with an answer Cowboy fans have been wanting to hear since he left Stillwater.

“My end goal is to be the head coach at OSU,” Walsh told Pistols Firing. “I can’t say how it’ll play out, but that’s where I wanna end up. It’s a great place, and I cannot imagine coaching at a better place.”

Walsh said he doesn’t have any ambitions of coaching in the NFL. In fact, he said he would rather be the running backs coach at OSU than the man calling the shots of the Dallas Cowboys.

“I don’t get asked by the media, but my family and friends will ask me questions like that,” Walsh said. “They don’t believe me.”

He is currently coaching the running backs at Abilene Christian University, and last year, he served as a graduate assistant at TCU. Walsh turned 25 in June, which has to make him one of the youngest coaches in the NCAA.

OSU coach Mike Gundy did not offer Walsh a GA position because he wanted Walsh to, “learn different ways of doing things.”

Gundy’s first coaching job was at OSU, and he rose to offensive coordinator before he went to Baylor and Maryland. Walsh said that leaving Stillwater was probably the wisest decision.

“I had a talk with coach Gundy probably halfway through that senior season, and his advice to me was to go somewhere else,” Walsh said. “He wanted me to branch out and learn.”

After Walsh was hired on as a full-timer at ACU, Gundy was asked about it at the media day news conference before the Alamo Bowl. He said he was not surprised because of his history at OSU, his dad’s history as one of the most successful high school coaches in Texas at Denton Guyer, where J.W. played, and Walsh’s ability to act “like a coach on the field.”

“You want your son to grow up and be like him,” Gundy said at the time. “He’s going to do everything right all the time. He doesn’t see obstacles or roadblocks, he pushes through.”

Although Walsh hadn’t said anything about a move back to OSU publicly, Gundy said it for him.

“He’ll spend some time there, and I’m gonna guess he’s gonna move on,” Gundy said. “And before long, he’ll be at a pretty high level.

“I would say some day at some point, probably back at Oklahoma State.”

Many people have endorsed Walsh as a possible candidate to replace Gundy when he retires. Zach Crabtree, a senior offensive lineman and good friend of Walsh’s, said he would bet on it. And Josh Stewart, Walsh’s former high school and college receiver, said he has been telling everybody he would be the next coach.

“I would put my whole life’s savings on it that if he’s not the head coach, he’ll be offensive coordinator,” Stewart told Pistols Firing. “That quarterback connection with him and coach, the impact that J-Dub has when he goes to Oklahoma State is ridiculous. The dude is a legend out there. And his football IQ is ridiculous.

“I think he’s gonna get the head coaching job, and on top of that, he’s gonna hire me.”

And by the comments that will accrue at the bottom of this story, Walsh coming back to OSU would be one of the most popular hires in Cowboy history.

At Big 12 Media Days, Gundy said he doesn’t plan to coach until he is 60. He turned 50 in August and signed a five-year extension in June. So there could potentially be a decade between now and when the 23rd head coach of the Cowboys is introduced.

One thing is definite at this point though: J.W. Walsh wants that to be him.