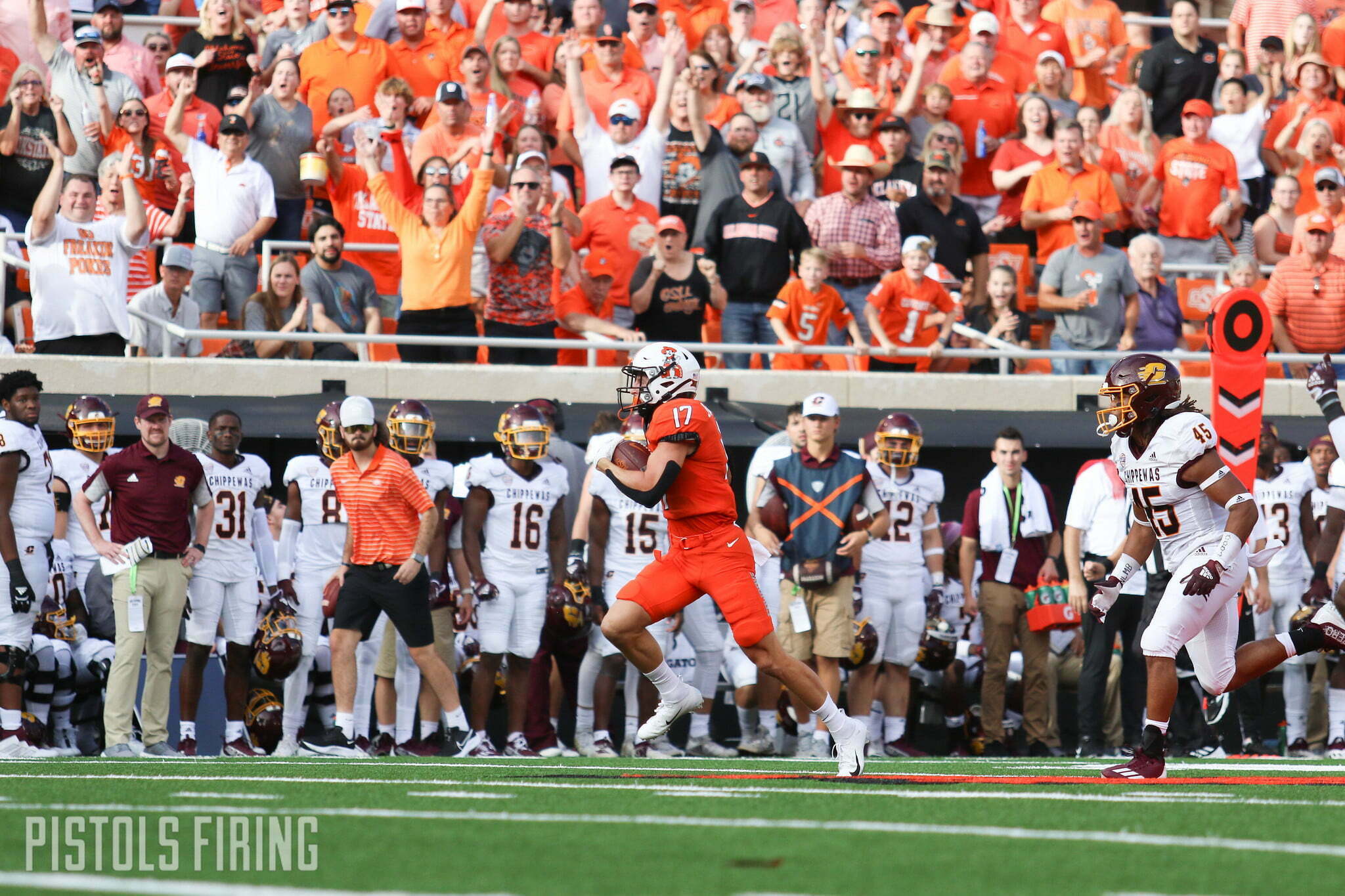 STILLLWATER — When John Paul Richardson scored the first touchdown of Oklahoma State’s season last Thursday, he did so out of position.

Not that he did anything wrong, but as the Cowboys rushed up to the line of scrimmage in the first drive of their 58-44 victory against Central Michigan, a formation was called that put the 6-foot, 180-pound Richardson in a wing, where a tight end would normally go. But with no tight end on the field, Richardson — only a sophomore — stepped into that spot, and 45 yards later he was in the end zone.

“We were going pretty fast, and I don’t know, coach, he may have forgot we were in 10 personnel, I don’t know,” Richardson said. “But I hopped in the wing, and all I had was a little stick route. So, it wasn’t really anything too bad. I could’ve split out wide if I wanted, but I was like, ‘Eh, I might as well just stay here.’ It ended up working out.”

It probably isn’t all that usual to have a player in the first game of his sophomore season have the wherewithal to adjust like that on the fly, but from most accounts throughout his freshman season and his sophomore fall camp, Richardson’s ability to adapt to the college game has been unusual.

Richardson caught 23 passes for 168 yards and two touchdowns as a true freshman in Oklahoma State’s Fiesta Bowl-winning 2021 season. Two of his three best games last season in terms of receiving yards came in the Fiesta Bowl (four catches for 42 yards) and in the Big 12 Championship (five catches for 33 yards).

Then after a fall camp where he was one of the talks of the town, Richardson had a career-high 73 receiving yards against Central Michigan in his sophomore debut to go with that 45-yard score. OSU is only one game into 2022, but it appears Richardson will live up to his preseason praises.

“He’s gotta make plays, but he’s fast, he’s shifty, he’s tough, he’s intelligent, he’s learning to be a good route runner and he likes to play football,” OSU coach Mike Gundy said. “That’s really who he is right now. Has he arrived yet? No, he hasn’t arrived yet, but he’s moving toward that. Now he’s just lacking live reps, experience. He needs 150 plays in live games to kind of get over that hump, but he’s heading in that direction.”

Richardson, son of legendary Texas A&M quarterback Bucky Richardson, wasn’t even in the top 1,000 prospects in his high school recruiting class. OSU was his first Power Five offer back in January of 2020. He might have not come with the fanfare of some of Kasey Dunn’s other recruits, but there hasn’t been a moment too big for Richardson yet.

“It hasn’t surprised me, really,” Richardson said. “I know the work I’ve put in day in and day out with my teammates. That’s why we do what we do with Coach (Rob) Glass, to prepare for moments like that in the game and just to prepare to make a big play. I feel like I’m ready for that. That wouldn’t be without Coach Dunn getting us prepared every week. He’s the best in the business, in my opinion, at doing that, just getting us prepared.”