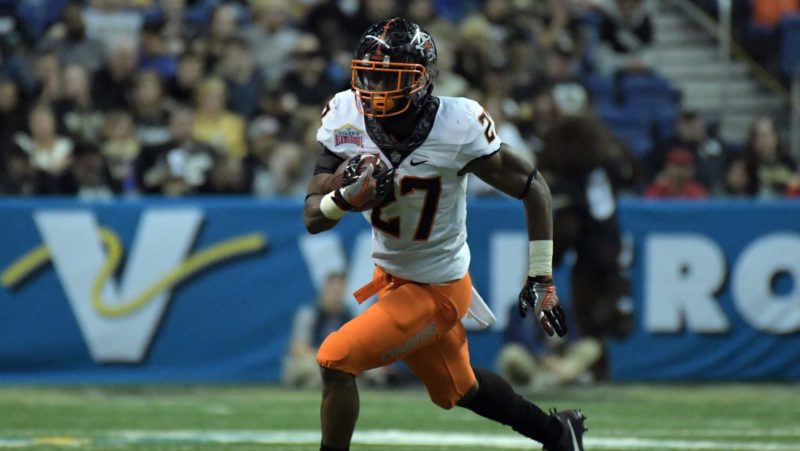 Justice Hill accomplished a lot this season. But to really appreciate his accolades we need to go back almost a year ago.

In the spring of 2016, the thought of an upcoming 1,000-yard rusher would have put smiles on the faces of Mike Gundy and OSU fans alike. But if you’d taken a poll among the orange faithful, few would have picked the true freshman from Booker T. Washington to fill that role.

For the second-straight year Oklahoma State welcomed a transfer tailback who would be give every chance to thrive. Many people (myself included) expect Barry J. Sanders to earn the starting spot in the backfield. Behind Sanders, was last season’s starter Chris Carson and a third senior, Rennie Childs.

Those three seniors brought in a combined 437 Division-I carries. The logjam at tailback figured to amount to a red-shirt season for Hill. Even Raymond Taylor, who had seen touches the second half of 2015, saw the writing on the wall and transferred to Tulsa.

But Hill, through an impressive fall camp and some nifty wiggling, forced his way into the starting lineup by week four. And he solidified himself as the running back of the future when he inked his name in the record books.

• Against TCU on November 19, Hill passed Thurman Thomas for a most yards by a Cowboy true freshman. Thomas’ record 843 yards was back in 1984 and stood for 32 years. Hill finished that game with 943.

• A week later, in Norman, Hill went for 99 yards, passing Mike Hamilton’s 2005 record for most rushing yards by an freshman at OSU.

• Justice Hill is the only OSU freshman to record six 100-yard games.

For his trouble, Hill was named a Freshman All-American, earned Big 12 Offensive Freshman of the Year and Second-Team Honors and AP Big 12 Newcomer of the Year.

But Hill has done more than just cement his place in OSU history and rack up a bunch of awards. He’s helped breathe a breath of fresh air into the OSU offense which might just be elite next season.