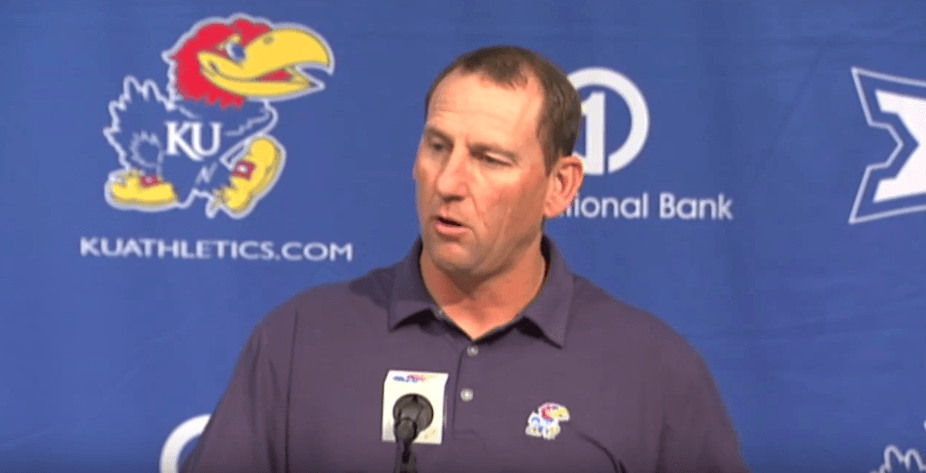 Maybe Oklahoma State should try and hire Kansas football coach David Beaty to run its public relations if he’s ever fired up in Lawrence. Beaty talked glowingly about the Pokes in his weekly presser. A sampling below.

I think they’re very good on defense. That’s something that I noticed. They average almost 10 TFLs a game, 9.8 a game, which is pretty rare. We had 9 this week, and man, I don’t know if I’ve been a part of a game like that very often. There’s 9-point-something TFLs. Man, that’s a lot. Those guys create some havoc and they get in your back field.

“Offensively, they’re also very good. They’re explosive. The quarterback makes them go, Mason Rudolph, makes good decisions. You can tell he’s a veteran guy. He’s good. Got a good arm. He knows where to go with the ball. He knows what he’s doing offensively. He manages the game well.”

On the run game

“I know that they pass the ball really, really well. I think they’re 17th in the country or something in passing yardage, but they run the ball pretty decent now. It’s not what you think on paper. I’m as worried about their running game as I am about their passing game.

“They have good backs. They have capable guys, and they’re pretty dadgum good up front now. Those guys will knock you off the ball.”

On finding a way to win

“They’ve played some good teams, now. They really have, and they’ve learned how to win some tough games, and that’s the thing I think that’s most impressive of these guys is they’ve found a way to win all three of those conference games and they easily could have went the other way, but you see the veteran in them that doesn’t allow that to happen.

“And they played a good Kansas State team that usually comes out on the other side of those, and for those guys to stick their heels in the ground and win that game, that was impressive to me, because the other team, Kansas State, had been the team that I always looked to for that in those close games. And they won another one the other day in overtime. They’re a team that scares you because they know how to win in every situation.”

“I think that’s helped them in the red zone defensively; and offensively, the quarterback knows where to go with the ball. I mean when you watch that tape, pay attention to that guy’s eyes and watch his eyes go from read to read to read and him be able to pull it right at the right time and get it to the open guy. He’s very efficient, and I think that’s been really good.”