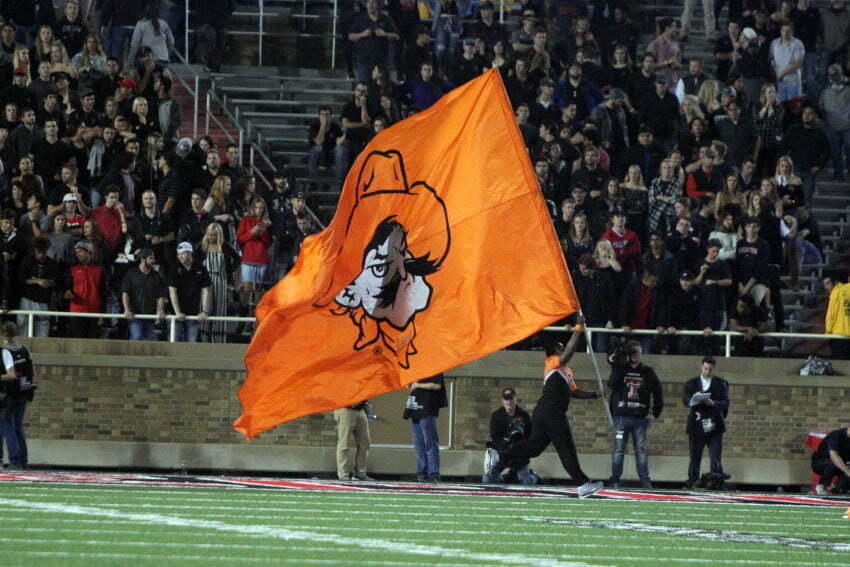 After a long bye week, Oklahoma State retakes the field this Saturday to face the Baylor Bears for Homecoming.

As per usual we have our two guest pickers.  Our enemy picks this week come from Kendall Kaut, one of the site managers for the Baylor SBNation site Our Daily Bears. He’s a fantastic writer, who was the most unbiased, level headed “Baylor fan” read during the Art Briles nightmare. This week our fan picks come from Tim “the Mailman” Bays, who delivered a fantastic GIF in response to Iowa State beating OU.

Before you argue this GIF wasn’t good enough to win (it was), another guy actually won with a George of the Jungle GIF, but failed to respond on Twitter. Better luck next time.

Okay, on to the picks:

Bet Against the Spread: Baylor — 23.5 points is a lot. Despite being 0-5 Baylor has proven it can score. I think OSU gets close to this number, probably winning by 20, but 23.5 is just too big of a spread.

More Total Yards: Mason Rudolph — I could see Rudolph putting up over 400 yards through the air on Baylor. Liberty’s Calvert did it, so why can’t Rudolph. I’m going with the orange Kool-Aide pick on this one.

Over/Under: Under — I don’t think Baylor puts more than 41 points up on OSU. I’d be surprised if they put up 30.

King of the Game: Connor Martin – The Baylor kicker is 8/9 on field goals including a season long of 46. I just don’t trust Ammendola right now.

Prop Bet: Since it’s homecoming, I’ll bet on not only a brand new helmet, but an entire throwback uniform.

Bet Against the Spread: OSU — I am picking OSU to win this thing by 25. I think Baylor is a better team than their record suggests. That being said, Oklahoma State needs a big win in a big way and I think they get it. A clean game from the Cowboys ensures a two-touchdown win and I think we see a step forward in the kicking game. Spencer’s squad gets two picks and a fumble recovery to go up a couple in TO margin and the Cowboys roll.

More Total Yards: Baylor, because I think Taylor Cornelius throws for 80 and picks up 40 on the ground. Garbage time.

Over/Under: What’s half of “under”? I think there are several reasons why this game could be close but I have a feeling it won’t be.

King of the Game: King Philly — Everyone loves a comeback story. I think Gundy makes the tweak they’ve been talking about and “Philly” looks good. That tweak might be going for it with under 5 to go in the red zone. They don’t leave him exposed on shorter kicks but trot him out there to hit a 50-plus yarder — and it’s good.

Prop Bet: I bet my wife tells more than five people that I write for PFB before halftime.

Bet Against the Spread: Baylor — Baylor  has played all five of its opponents somewhat close, albeit all loses. Both teams have had two weeks to prepare for the game. I think OSU probably wins by three touchdowns but I don’t think they will cover.

More Total Yards: Mason Rudolph — Mason is averaging a crazy 382 passing yards a game. Zach Smith has only thrown over 300 yards in his collegiate carrier three times. I think Smith is a terrific talent with a great arm, but with arguably Baylor’s best receiver (Chris Platt) out for the season, do they have the receiving corps to produce a huge game? I’ll take Rudolph on this one.

Over/Under: Under — I don’t think Baylor is going to put up 41 on OSU in Stillwater on Homecoming with the weeks of preparation. Who knows, I could be dead wrong. My guess is Baylor scores in the low 30s to high 20s.

King of the Game: Connor Martin –  I don’t believe historically Baylor has had an amazing kicking game. Briles really masked that by basically going for first down all the time. Baylor’s kicker, Connor Martin,  is 8 for 10 on the year with zero misses inside the thirty, which I sadly can’t say about OSU’s kicker (sad face).  I think he makes more field goals or has a higher fantasy football kicker output.

Prop Bet: J.D. King gets ten-plus carries and OSU runs for 250-plus yards. Baylor is giving up an average of 271 yards on the ground their last three games (Duke, Oklahoma, K-State). I doubt we give Justice 30 carries or Mason 11 carries again. J.D. King takes a handful of those carries and the team runs wild on a very susceptible rush defense.  King hasn’t had double-digit carries since Pitt and this is a perfect game to moderate Hill’s load.

Bet Against the Spread: OSU — I’ll take OK State to cover. The Bears are getting better, but the team is still dealing with a ton of injuries. Rudolph’s lack of mobility (or at least compared to the rest of the Big 12) is maybe the only hope to limit the Cowboys potent passing attack.

More Total Yards: Baylor — Rudolph will do very well, but even if this gets close, I figure Rudolph would be pulled before he could overtake the Bears.

Over/Under: Under —  I think Baylor will score like 28. Oklahoma has a terrible secondary.

King of the Game: Connor Martin – He is now Baylor’s kicker and punter after the Bears normal punter is out for the season.

Prop Bet: Denzel Mims goes for over and 110 yards.

Bet Against the Spread: OSU — OSU covers the 23.5! Oklahoma State has too much offense and a young improving secondary that will hold the Bears down enough to get it done!

More Total Yards: Baylor — With Baylor’s porous run defense, Oklahoma State will be able to control the game on the ground giving Mason’s arm a bit of a rest. About time Baylor got a big dose of Justice!  Baylor will pick up cheap 4th quarter yards in a game that’s already decided.

Over/Under: Under —  The front of the D will feast, while the young secondary will continue to improve, getting the defense off the field on 3rd down.

King of the Game: Matt Ammendola has the bigger game.  Coming off a rough game, look for a bounce back.  Plus, once Baylor is down big, not much need for FGs!