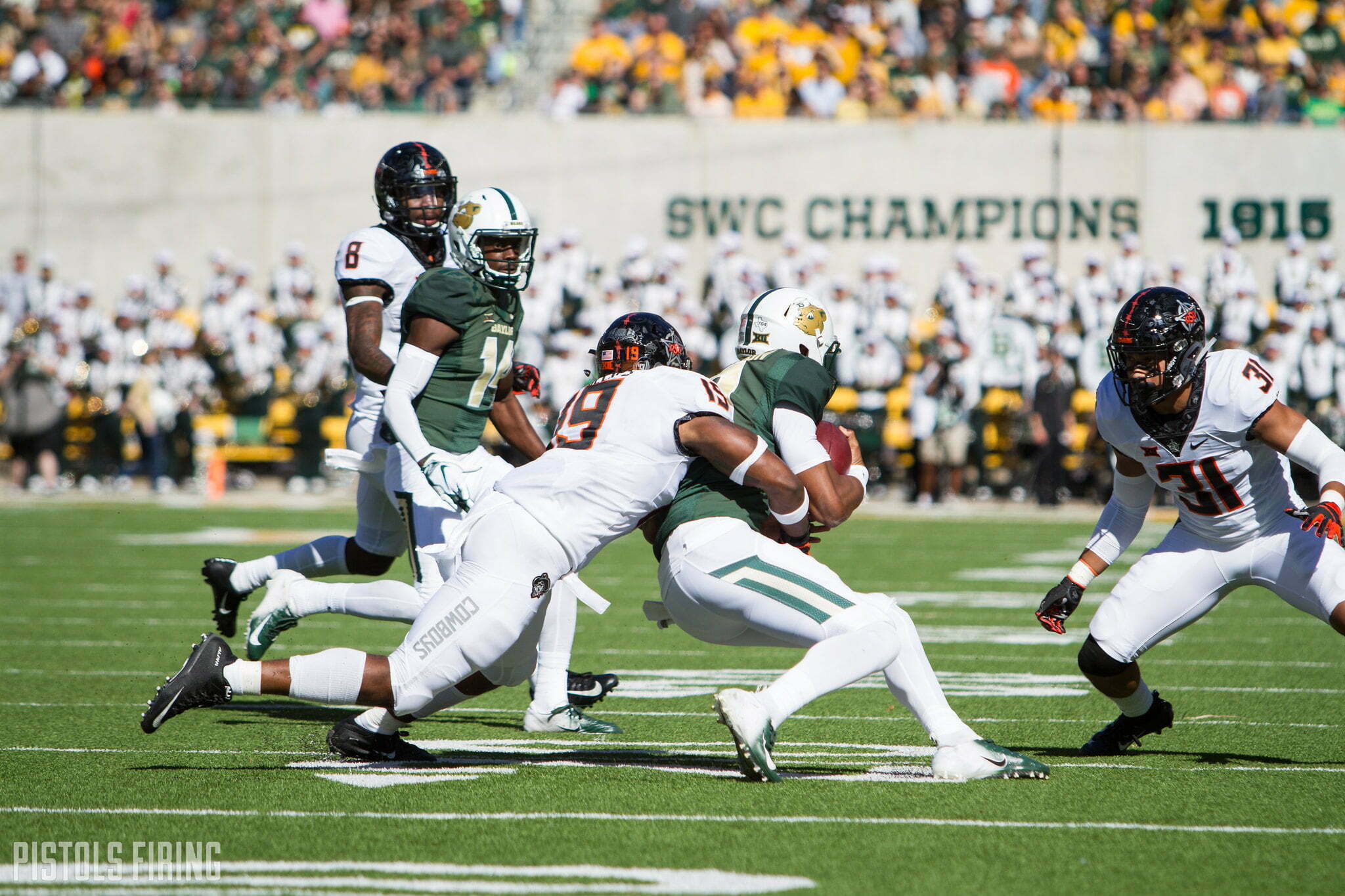 This may be the least-surprising thing I write all year: OSU’s defense needs to be a lot better this season than it was last season. Change the date, change the quote, and you can probably auto-post this lede every second Monday in August.

The Cowboys ranked No. 97 in the country in points per drive allowed in 2018 at 2.55 per drive, which made a nice bookend to 2007 when OSU again ranked No. 97. Here’s a graph that might be NSFW but paints a clear picture of just how much OSU needs to improve to again be a nine-win team. 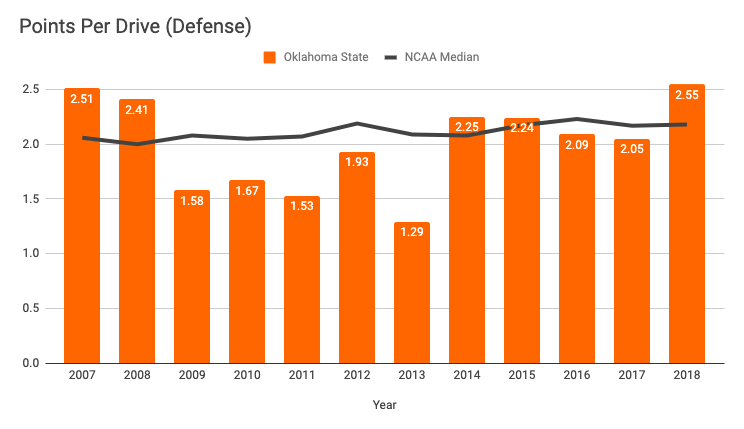 When you combine these numbers with a decade-long low in turnovers created (see chart below), it’s easy to see why OSU limped its way to a 6-6 regular-season record and gave up 28+ in all nine of its Big 12 games and 40+ in four of them.

So … what changes in 2019 other than a new defensive line, thinned-out linebacker corps. and maturity in the secondary (i.e. new players)?

“Definitely tweaking my approach, no doubt. Scheme-wise, we’ll remain the same,” said defensive coordinator Jim Knowles recently. “We want to have a defensive scheme that is aggressive because we want to be attractive.

“You talk about recruiting, we want to be attractive to the high school kid who wants to play in the NFL. I think what we do in terms of playing close and in-your-face to receivers, that’s what they’re gonna do in the NFL. We want those kids to be able to see that in our system. But I need to tweak it to be able to match what happens in the Big 12.”

This was echoed by cornerbacks coach, Tim Duffie.

“It’s difficult. Those guys, it’s not like we’re tricking them,” he said of his secondary. “They kinda know what they’re up against. I think that’s why any kid that’s out there that we’re recruiting wants to play in this league because it’s a challenge, and they have aspirations of playing in the NFL. In our system, they’re going to be put in some man situations, and that’s what they do in the NFL. You’ve gotta cover the best guy, sometimes the highest paid guy on the [NFL] team.”

I actually like this. Past defensive commits have even referenced an excitement about playing in the Big 12 because of how frenetic it is. Of course all of it sounds good in August, but does it translate in September, October and November?

“My job is to put our team in the best position to win,” added Knowles. “We had too many explosive plays last year. Fifth in the country in sacks, but what’s the tradeoff? That’s what keeps me up at night is trying to come up with that balance and find a way to do it without giving it away — to create more disguise, more deception and also give our team protection when we need it.”

He’s right about the explosive plays. OSU ranked No. 128 in the country in plays of 20+ yards allowed. So do you pull back on the aggression and lower your sack rates to play more conservatively? Which levers do you pull to try and give your offense the best chance to crush teams? There are multiple ways to be aggressive as a defense.

To me, at the forefront of all of this is turnover creation. That has, for so many years of the Gundy era, been paramount in OSU winning double-digit games. It always felt like luck or one-off seasons, but when you do it at that level for a decade, it can’t be.

So how does Knowles seal up a puncture in the dam and create a bit of chaos so fumbles and picks start falling the Pokes’ way again? And do it all with a new set of talent on that side?

I don’t have any answers for that, but I do know that if he doesn’t figure that out, it’s going to be bad for Oklahoma State … but after two seasons in this league at this level, possibly even worse for him.