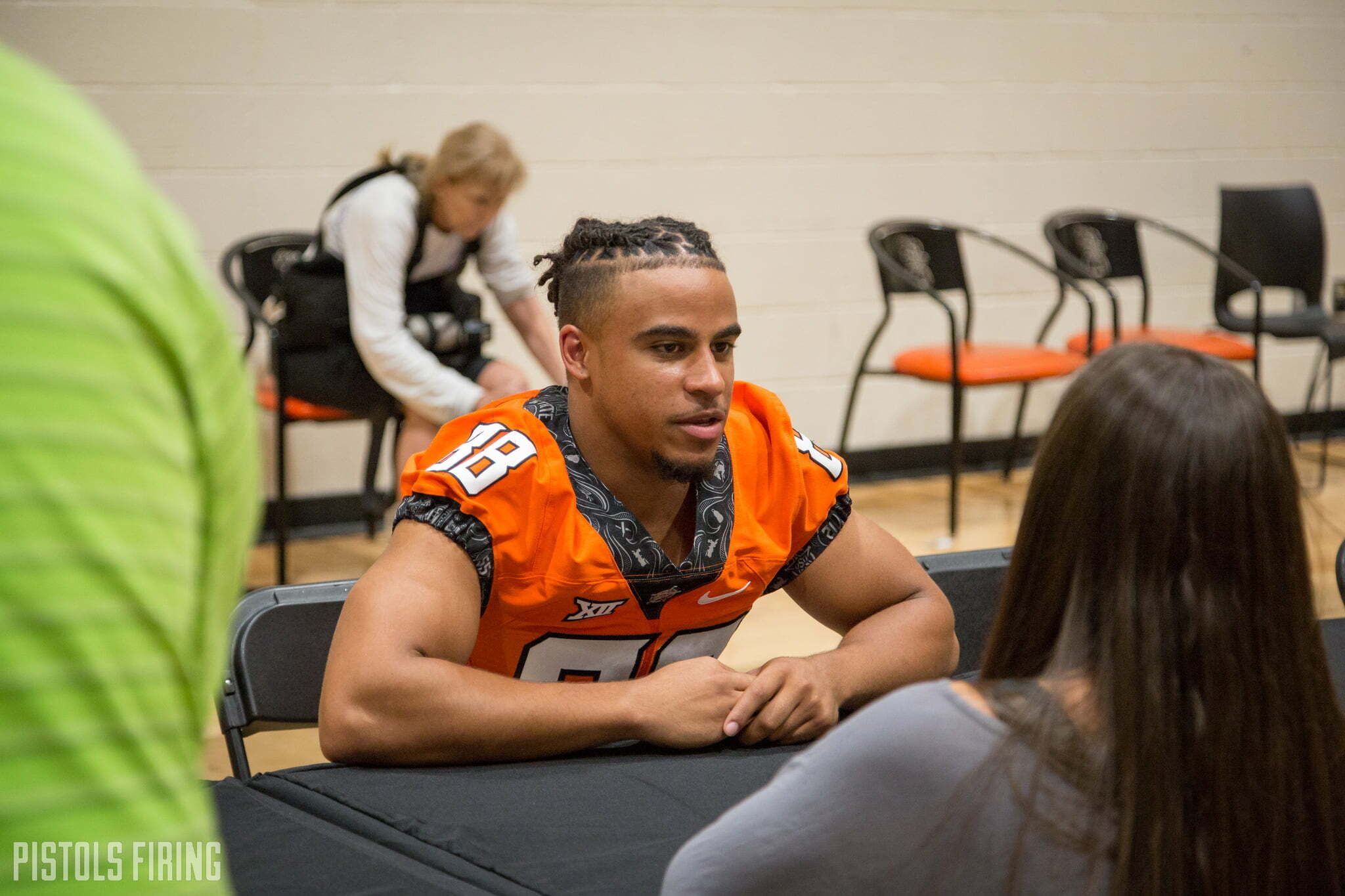 STILLWATER — Landon Wolf getting put on scholarship wasn’t a viral video on ESPN, but the result was impactful, nonetheless.

Wolf, a redshirt sophomore receiver at Oklahoma State, got a text from OSU’s assistant director of operations Rod Johnson to come in early before a fall meeting, and here is how their conversation went through Wolf’s recollection:

“Landon, you’ve done a good job, blah blah blah, we’re going to be able to help you out this year,” Johnson said.

“What do you mean?” Wolf replied.

“We’re going to be able to put you on scholarship,” Johnson said.

Wolf called his mother, who didn’t answer because she was working one of her two jobs. Wolf said he called again later that night when she got off to tell her.

“She was crying a little bit,” Wolf said. “It was a blessing to be able to tell her that.”

This season has been moving quickly for Wolf. After being put on scholarship in the fall, his role on offense will likely increase after Mike Gundy announced Jalen McCleskey’s intentions to redshirt and transfer.

Wolf has four catches for 41 yards this season. He didn’t have any catches his redshirt freshman season, as he did the majority of his work on special teams. He played in all 13 games in 2017 and had seven tackles. His hard work on special teams and on the scout team in practice paid off with him being awarded OSU’s Outstanding Walk-On Award.

“I played all special teams and barely played any offense, so the thing for me was just showing them that I had more value than just my offense, so I could just make the travel squad,” Wolf said. “Coach (Kasey) Dunn told me early on, ‘You’re going to have to find a way to get on the bus.’ (Special teams) was something that really added value to my stock.”

Coming out of East Central High School in Tulsa, Wolf said he had a few NAIA offers, a few Division-II offers and a handful of preferred walk-on spots. He called his opportunity with OSU his “biggest and best thing,” and with it being close to home, Wolf came to Stillwater.

Wolf comes in with some built-in chemistry with quarterback Taylor Cornelius. The two ran scout team together for last two seasons. Wolf said he and Cornelius tried to have fun on scout team and score as much as possible. Cornelius said Wolf will be able to slot right in.

“I know he’s ready,” Cornelius said. “He’s always been ready. He just hasn’t had the opportunity. I told him his time would come when he first got here.”

Cornelius’ advice as a former walk-on to Wolf is something Wolf said he tries to pay forward with other walk-ons.

“It’s always ups and downs,” Wolf said. “That’s what I try to tell all the other walk-ons. A lot of people get discouraged or they’ve been here for a while and don’t feel like they’re getting their recognition. I tell them, ‘Coaches see that, so just keep doing what you’re doing. Keep working hard. Do the little things right, and it’ll pay off in the end.’”

Cornelius isn’t the only one who said Wolf is ready. Fellow wide receiver Tyron Johnson said he has been impressed with Wolf’s work ethic and said Wolf will “fit right in.”

“Landon always impressed me since I first saw him,” Johnson said. “First one in the weight room, last one out. You can see the hunger in his eyes. Before he earned that scholarship, he was still hungry to play. He’s just a hard-working kid. You gotta love kids like that, that come in every day, don’t say much and just work hard. I think he’s ready. There’s no pressure.

“We all know what Landon can do. The world don’t, but I think once he gets in, he’s gonna make plays.”

Saturday will be his first big chance to make those plays, like as a starter in the slot, but Wolf said it’s only the beginning.

“It’s the first step,” Wolf said. “I have much higher goals, and I wanna contribute as much as I can, but it feels great to be able to contribute more this week. It’s a blessing.”

He said he won’t have any extra butterflies entering Saturday’s game, and when asked what he was looking forward to most about the game, Wolf smiled and simply said: